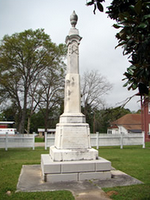 Confederate monuments are fairly commonplace in Mississippi and throughout the South, with many monuments erected on courthouse squares. The majority were erected in the late 19th century and were placed there by Confederate veterans themselves and their supporting organizations, chiefly the United Daughters of the Confederacy. Dedication ceremonies were big events, attracting thousands of veterans and curious onlookers, and usually involved a lot of longwinded speeches by  politicians. The monuments have since become part of the Southern landscape. Among the earliest memorials to the “Lost Cause" is the Confederate monument in Liberty.

The move to erect a Confederate monument in Liberty began in 1866 with the laying of a cornerstone on property donated by the local Masonic Lodge, and the fundraising effort was undertaken by a local historical association organized the same year, and possibly among the first such groups in the South. Of course, the Civil War had barely ended in 1866 and the state was in the midst of Reconstruction. Needless to say, money was scarce. Over the next five years, however, the association managed to raise $3,332 for the monument. 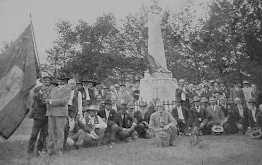 Designed and built by Captain A.J. Lewis of Port Gibson, who was himself a Confederate veteran, the result (above) was an Italian marble shaft more than twenty feet tall, along which are inscribed the names of the 279 Amite County Confederate dead. The monument includes the following dedication: "Sacred to the Memory of the Soldiers from Amite County Who Lost Their Lives in the Confederate Army." In the years to come, the monument was the scene of frequent reunions and ceremonies, as seen above, from around the turn of the century.

The monument was dedicated on April 26, 1871. Receiving the monument on behalf of the veterans was Lt. Col. Charles P. Neilson, a resident of Liberty and a veteran of the 22nd Mississippi Infantry. The monument at Liberty was the first of many such monuments in Mississippi, and is one of the earliest in the United States. Whether it is the very first Confederate monument, however, as some have claimed, is the subject of a century-old debate.  In 1911, the Confederate Veteran magazine published an article about the Liberty monument based on information submitted by Liberty resident E.A. Causey. After waxing eloquently about the monument and stating that the sculpture"was certainly a fine credit to its people," the magazine's editor, S.A. Cunningham of Tennessee, stated that "To say that this was the first Confederate monument erected may be misleading. Without referring to dates, the impression prevails that the Bolivar [Tennessee] monument (above right) was erected several years before this one at Liberty." 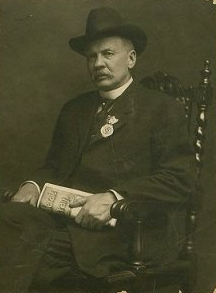 In fact, the Bolivar, Tennessee, monument was erected in 1869, two years before the Liberty monument. In a subsequent issue of the magazine, however, David C. Bramlette, Jr. of Woodville wrote Cunningham (left) that "as early as November 18, 1866, my mother, Miss Olivia J. Ratcliffe, then a girl eighteen years old, presented to the Amite County  Historical and Monumental Association a stone to be used for the corner stone in the monument.Col. Richard Stewart gave the stone to the association, and on the occasion of its presentation my mother made a stirring address, the original copy of which I still have in my possession."

Richard Atlantic Stewart, known as "The Fighting Parson," was a Methodist Episcopal minister, planter, and politician who was an officer with the Pointe Coupee Artillery during the Civil War and a veteran of the Mexican War. Soon after the Civil War ended, he departed for Brazil and then went to St. Thomas, where he became a successful businessman. He eventually moved back to the United States and settled in Florida and died there in 1880. Before he left for Brazil, though, he participated in the dedication of the cornerstone for the Liberty monument. Certainly, a gentleman of his stature would not have participated in a sham monument dedication, would he? Of course, by 1911 he had been dead for some time and could not add his own voice to the discussion about which monument was actually the first. Besides, he was a native of Tennessee, and may have not wanted to weigh in on the subject at all.

Apparently, S.A. Cunnngham, editor of the Confederate Veteran, thought it best to let bygones be bygones, as he wisely chose not to engage further in the debate, leaving the question about which was actually the "first" monument for future generations to decide. Regardless, the Liberty Monument is definitely the first in Mississippi and is indeed "a fine credit to its people."
Posted by Jim Woodrick at 6:55 PM