Bishop C.H. Mason and the Church of God in Christ

Born near Memphis, Tennessee, on September 8, 1866, Charles Harrison Mason was the son of former slaves. Converted at a young age, Mason began preaching in Arkansas. A Baptist, he briefly attended the Arkansas Baptist College, and then “returned to the streets and to every pulpit that was opened to him.” As a result of his adherence to the doctrine of "Holiness," however, he soon found that many Baptist churches were no longer willing to open their doors to him or his followers, including Charles Price Jones, another Baptist preacher. 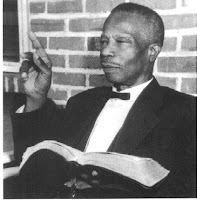 In 1896, Mason and Jones, along with other ”militant gospel preachers,” held a large revival in Jackson, Mississippi. As a result of their Pentecostal preaching style, both men were expelled by the local Baptist Association. Subsequently, C. P. Jones led a group of followers from the Mt. Helm Baptist Church in Jackson, to form the Christ Temple Church. The next year, Charles Mason (right) moved to Lexington, MIssissippi, where he continued the revival on the steps of the Holmes County Courthouse. Moving to a private home and later to an abandoned gin, Mason established a church in Lexington in 1897, naming it St. Paul. As more churches were established under Mason’s leadership, St. Paul was soon recognized as the “Mother Church” of a new denomination. Initially calling it the "Church of God," a fairly common name for a number of other "Holiness" denominations established during this period, Mason searched for a more distinctive name. While in Little Rock, he settled on the name "Church of God in Christ," believing it to be divinely inspired. To lead the denomination, C.P. Jones became General Overseer, while Mason was in charge of the churches in Tennessee. The denomination quickly grew.

Around the turn of the century, a new doctrine involving "speaking in tongues" was making its way into many "Holiness" churches, and was heavily influenced by a years-long revival in Los Angeles known as the Azusa Street Revival. To investigate this new phenomenon of "speaking in tongues," Jones sent a committee of three ministers, one of whom was Mason, to Los Angeles. During the revival in 1906, Mason started "speaking in tongues," and upon his return to Tennessee began preaching the new doctrine. This apparently didn't find much favor with C.P. Jones (left). At the general convocation in Jackson the next year, Jones publicly rejected Mason's teaching on "speaking in tongues," After much debate, Mason was expelled from the church he helped establish. Later that same year, Mason reorganized the Church of God in Christ (also known as C.O.G.I.C.) in Memphis. Thus, there were now two denominations with the same name! After years of litigation, Mason's group was finally awarded the name, and those who followed Jones became known as the Church of Christ (Holiness) U.S.A. In the "new"  C.O.G.I.C., Charles Mason was unanimously chosen "General Overseer and Chief Apostle." He would remain at the head of the church for the next fifty-four years. 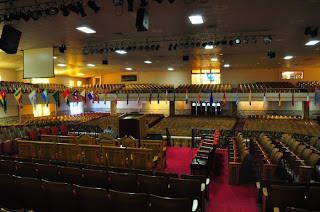 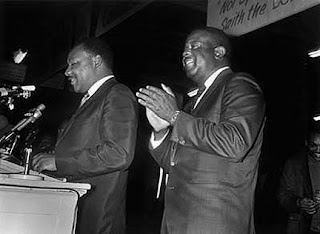 After establishing the church's headquarters in Memphis, Bishop Mason traveled throughout the nation preaching and establishing  C.O.G.I.C. churches. Because the church was legally incorporated, many unaffiliated Pentecostal ministers joined the organization, both white and black, many of whom would later become leaders in other Pentecostal denominations. Although the first General Secretary of  C.O.G.I.C. was a white minister named William B. Holt, it was difficult for whites to remain in the church in the segregated South. In 1914, when the Assemblies of God was founded, most of the white ministers trained by the  C.O.G.I.C. (approximately 350) joined the new denomination, and since the 1930s, the Church of God in Christ has been largely an African American church.

Bishop Charles Harrison Mason died on November 17, 1961, at the age of 95. He was buried in the church he founded in Memphis, a 5,000 seat building known as Mason Temple, dedicated in 1945. The photo above is of the interior of the historic church, which serves as the world headquarters for C/O.G.I.C. On April 3, 1968, Dr. Martin Luther King, Jr. delivered his famous "I've Been to the Mountaintop" speech from this church. It was the last message delivered by Dr. King.

Today, the Church of God in Christ has nearly five million members and 12,000 congregations in the United States, and is the fifth largest Christian church in the U.S. Around the world, C.O.G.I.C. churches have been established in more than sixty countries. Lexington, Mississippi, in still recognized as the birthplace of the denomination.
Posted by Jim Woodrick at 6:10 AM