Oliver Pollock: The Man and the Symbol

The name Oliver Pollock may not be considered among the “Founding Fathers” or counted as one of the heroes of the American Revolution, but he most certainly had a great impact on the founding of the republic. If he is remembered at all, it is usually because of a symbol he is credited with inventing, even if his “invention” might be due to poor penmanship. 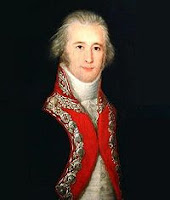 Oliver Pollock (1737-1823) came to North America in 1760. A native of Ireland, he arrived in Philadelphia and settled in Cumberland County, Pennsylvania. At age 25, Pollock began a career as a merchant in the West Indies. With his headquarters in Havana, Cuba, he traded mainly with the Spanish. In Cuba, he established a relationship with Governor-General Alejandro O’Reilly (left). Like Pollock, O'Reilly was from Ireland, but left his native land to fight in foreign armies, serving in both the Austrian and Spanish military. O’Reilly married into the family of the Spanish governor of Cuba, and quickly rose in influence in the region. In 1769, he was sent to Louisiana to put down a rebellion by French Creoles, a task he completed with flying colors.

Following his friend to New Orleans, Pollock worked there as a merchant and was given free trade status within the city because of his relationship with O’Reilly. As a result, he because a very successful businessman, particularly in dealing with flour, which was a highly sought-after commodity. To help the colonists, Pollock sold the flour at half price, no doubt endearing him to the populace. In 1770, he married Margaret O'Brien (no doubt a good Irish Catholic girl), with whom he had eight children. Margaret died in 1799. 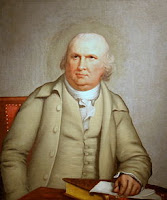 With his growing wealth, Pollock gained political influence. In 1777, he was appointed as the commercial agent of the United States government in New Orleans, essentially making him the representative of the colonies. Utilizing his enormous wealth, Pollock financed American military operations west of the Mississippi, including George Rogers Clark’s campaign in Illinois in 1778.  That same year, he borrowed $70,000 from the Spanish governor of Louisiana and served as his aide-de-camp during a campaign against the British. Throughout Louisiana, Alabama and Florida, the Spanish defeated the British, culminating with the Siege of Pensacola in 1781. Pollock, through his diplomatic skills, helped gain the surrender of Fort Panmure by the British in Natchez. 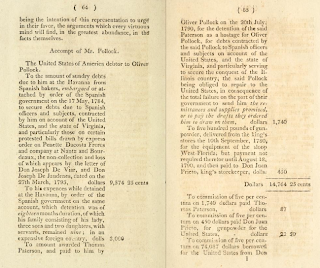 Two years later, Pollock was appointed as a U.S. agent in Havana. Unfortunately, he had not paid his debts, and was thrown into prison because he owed $150,000. He was paroled in 1785 and returned to Philadelphia, where he met Robert Morris (above), another financier of the war and former Superintendent of Finance for the United States. Morris had also fallen on hard times due to personal debt, and the nation itself was in a deep financial crisis. As such, neither the Commonwealth of Virginia nor Congress could or would repay Pollock’s or Morris’ debts from the war, despite the fact that both had used their personal wealth to support the revolution and despite a thorough accounting of what Pollock was owed in 1803. (left). 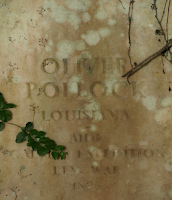 Neither man was ever able to clear himself completely of the financial burden, but by 1800, Pollock able to acquire some property, and he remarried in 1805. When his second wife died in 1820, he left Pennsylvania for good and moved to Mississippi to live with one of his daughters, who had married a plantation owner in Pinckneyville in Wilkinson County. After a full life, Oliver Pollock died on December 17, 1832. Pollock's grave (right) is located in Pinckneyville. Unfortunately, no image survives of Pollock (most of his papers were lost in a fire). However, the modern sculpture below is of Pollock, and is located in the Galvez Plaza in Baton Rouge. 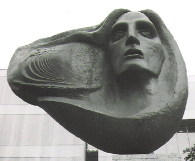 Despite a life filled with adventure, Oliver Pollock is perhaps best known for his poor handwriting. In New Orleans, Pollock kept financial books as the U.S. agent, and entered the abbreviation ‘ps’ by the figures for ‘peso,’ which was the standard currency at the time. Because Pollock recorded these Spanish “dollars” or “pesos” as ‘ps” and because he tended to run both letters together, the resulting symbol resembled a ‘$.’ It was Robert Morris, Pollock’s old friend and business partner in Pennsylvania, who first adopted the new symbol in an official document, and by 1797 it was cast in type in Philadelphia. Thus, Oliver Pollock is credited with creating, by design or not, the symbol for the dollar, now perhaps the most widely used symbol in the world.