George Kelly Barnes* was born on July 18, 1895, to a fairly well-to-do family in Memphis, Tennessee. Raised in a traditional household, Barnes’ first sign of trouble began when he entered Mississippi State University (then called Mississippi A&M) in 1917. Enrolled as a student in the Agriculture program, Barnes’ highest grade (a C+) was awarded to him for good physical hygiene. Although he apparently kept himself clean, he was constantly in trouble with the faculty and spent most of his time at Mississippi State trying to work off the demerits he earned. It was while George was at Mississippi State that he met Genevieve "Nevie" Ramsey. After falling in love with her, he decided to quit school after just four months and they married in Clarksdale in 1919. The couple had two children, and he took a job as a cab driver in Memphis, working long hours but earning little pay. Barnes soon left the cab company to look for better work, but was unable to find much more than odd jobs, At nineteen years old, he was almost destitute. To makes matters worse, he and Nevie separated. 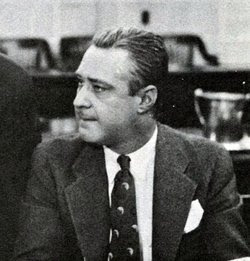 Faced with all these problems, George Barnes entered into a new business venture: bootlegging. Apparently, life as a small-time gangster suited him, and Barnes began to enjoy the fruits of his new "profession." George Barnes is better known as "Machine Gun" Kelly. He would become one of the most wanted gangsters of the prohibition era. His life of crime begins and ends in Memphis, Tennessee, with a little Mississippi flavor mixed in for good measure.


After several rounds with the local police, Barnes decided to leave Memphis and go west with a girlfriend. To evade law enforcement and to protect his family in Memphis, he changed his name to George R. Kelly. Out west, Kelly continued committing small crimes, but it was bootlegging that got him in trouble. He was arrested in Tulsa, Oklahoma, in 1928 for smuggling liquor onto an Indian Reservation. Kelly was convicted and sent to Leavenworth Penitentiary for three years. He was such a good prisoner, though, he was released early. Soon after his release, he made the worst mistake of his life: he met Kathryn Thorne.

Kelly met Kathryn in Oklahoma City. Already married three times before (the last one meeting a mysterious end), she was at the time the mistress of a local bootlegger. Born Cleo Brooks in Saltillo, Mississippi, in 1904, she was raised on her stepfather's farm in Texas and from an early age was associated with criminals. By the time she met Kelly, she had a criminal record for shoplifting, robbery, prostitution, and receiving stolen property. With so much to offer, George quickly fell in love with her and they were married in September 1930 in Minneapolis, Minnesota. To get a head start on their new life together, they stole her boyfriend's new Cadillac and even his prize English bulldog, and they embarked on a life of crime.

Kathryn Kelly (left) had big plans for her fourth husband, and became his biggest promoter. First, she purchased a Thompson machine gun, popularly known as a "Tommy" gun, taught him how to use it, and then gave him the nickname "Machine Gun Kelly." To spread his fame, she routinely handed out expended .45-caliber cartridge casings as souvenirs to other gangsters. Kelly, of course, had done little to earn his growing reputation, but the name soon caught on and the couple began committing more daring crimes, like bank robbery. In fact, it was probably Kathryn who was the mastermind behind a string of small bank robberies in Texas and Mississippi, the last one taking place in Tupelo. 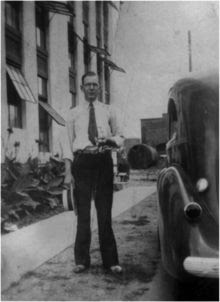 At 4:00 p.m. on November 30, 1932, Kelly and an accomplice entered the Citizens National Bank on Main Street. Kelly locked the door and placed a .38-caliber pistol to the back of teller Homer Edgeworth's head. They went to the vault in the back of the building, and escaped through a side door with $38,000. Edgeworth was not harmed in the robbery, and lived to the ripe old age of 102. After the robbery, Edgeworth said that Kelly was "the kind of guy that, if you looked at him, you would never have thought he was a bank robber." Later in life, Edgeworth (right) was a justice of the peace in Hinds County, where in 1962 he convicted James Meridith of lying about his residency on a voter registration form (apparently Meridith never served any time, however). That same year, of course, Meridith became the first African American admitted to the University of Mississippi. Homer Edgeworth passed away in 2009 in Ridgeland, having played a part in several vignettes of Mississippi history. 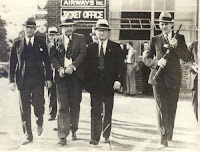 Although the Tupleo bank robbery and other such capers were lucrative, bank robberies were apparently not flashy enough for Kathryn Kelly, and she suggested they kidnap someone for a ransom (a very popular crime at the time). So, armed with machine guns, they kidnapped Charley Urshel, a wealthy oil man, from his home in Oklahoma City and eventually collected a $200,000 ransom. Once Urshel was free, however, he was able to lead the FBI to the kidnappers' hideout. George and Kathryn escaped, but were soon captured at a friend's house on Rayner Street in Memphis (middle left). When they were captured, George was in his pajamas and Kathryn was asleep, hardly the image that she had worked so hard to create.


Sentenced to life in prison for the kidnapping, George was first sent to Leavenworth and then to Alcatraz, where he was one of the first prisoners on the island. Again, he was considered a model prisoner. Sent back to Leavenworth, George "Machine Gun" Kelly died of a heart attack on July 17, 1954, and is buried at Cottondale Texas Cemetery with a small headstone marked "George B. Kelley." He was 59 years old. Kathryn, along with her equally criminally-minded mother (who was in on the plot), both received life sentences, but were released in June 1958 due to technicalities with their trial. After release, she disappeared with her mother Ora.

During his crime spree, George "Machine Gun" Kelly never actually killed anyone and probably would not be remembered as anything other than a petty criminal today if not for the influence of Kathryn Kelly. In fact, we might not know him at all if he had just done a little better than a C+ in physical hygiene at Mississippi State.

* Some sources indicate that his actual middle name was Celino.