A Very Busy Man: The Life of S.G. Thigpen 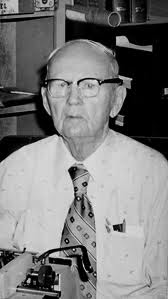 If you're like most folks, there are lots of things you would like to accomplish in your lifetime, but somehow there never seems to be enough time. Pressures from work, family and life in general too often seem to get in the way and before too many years pass the chance to achieve something meaningful and memorable has slipped away. Some people rise above the clutter of everyday life, however, and seem to make every day count. Such was the life of S.G. Thigpen.

Samuel Grady Thigpen was born in 1890 in Jasper County, Mississippi, on a plantation founded by his grandfather in the 1840s. In 1917, Thigpen moved to Picayune in Pearl River County after graduating from Mississippi College and teaching school for a time in Poplarville. In Picayune, Thigpen went to work for the Crosby and Rowlands Lumber Company, one of many lumber mills operating in the area in the early part of the 20th Century. In just a couple of years, however, the enterprising Thigpen opened his own store. Along with business partner Barney Whitfield, Thigpen opened the imaginatively-named Thigpen-Whitfield Hardware Company in 1919.

Selling general merchandise and building supplies, with everything from “tractors to toasters,” the Thigpen Hardware Company was a mainstay of downtown Picayune for decades (Thigpen bought the company outright in 1938 and dropped the name Whitfield). On Saturdays, the store typically stayed open until midnight to accommodate the needs of the rural community, and was a favorite of local children. Not only did he give them free chewing gum, but the store also had a carnival-style mirror. On “peanut day,” Thigpen provided all-you-can-eat peanuts to all his customers. 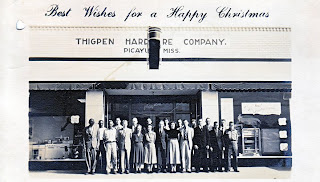 In addition to the hardware business, Thigpen owned Thigpen Realty, through which he sold land to grow tung oil trees. For those who wanted to invest in land in Pearl River and Hancock counties, Thigpen could sell them the property, provide tractors and other farm equipment to work the land, sell them lumber to build a house, the appliances to go in the house and furniture for the house at the Thigpen Furniture Company, located next door. He could finance it all too, as he was the founder and president of the First National Bank in Picayune. In case there was a property loss, he also owned Thigpen Insurance. In his spare time, he also served as president of the Mississippi Retail Hardware Association, the Mississippi Farm Implement Association, the Picayune School Board, the Hospital Board, and the Chamber of Commerce. Needless to say, he was a very busy man. 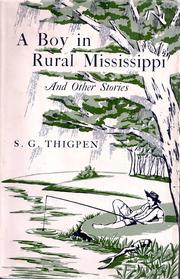 As busy as he was, Thigpen somehow found time to broadcast a radio program from a booth in the hardware store twice a day, and on Sundays had an "old time" radio program about the history of the region on WRJW. He also had a store newspaper (known as the "Thigpen Store News"), published from 1924 to 1973. All this continued until 1960 when he retired…sort of. At age seventy, Thigpen started interviewing “one old person per week” about Mississippi history. These interviews turned into five books, all of which were published after age seventy five. Beginning in 1965, Thigpen wrote Pearl River: Highway to Glory Land; Next Door to Heaven; A Boy in Rural Mississippi and Other Stories; Work and Play in Grandpa's Day, and Old Days and Old Ways. He also found time to write numerous articles for newspapers.

S.G. Thigpen died on Christmas Day in 1981 at the age of ninety-one. On his death bed, he is said to have told his grandson that “I rode to school on a mule and saw a man land on the moon, so it is time for me to go.” Indeed, Samuel Grady Thigpen lived a very full life and achieved a great deal. Above all, it seems that he made every day count.