James Thomas Bell, popularly known as "Cool Papa" Bell (1903-1991), was born in Starkville. Actually, he was born just outside Starkville in the Sessums Township, the fourth of seven children, all raised by his mother, Mary Nichols, a widow. When and why he changed his name to "Bell" is unknown. Renowned as the fastest man to ever play baseball, one legend claims he could switch off the light and "be in bed before the room was dark." Lots of other stories about his speed survive (he was once clocked turning the bases in just 12 seconds), but perhaps the best (and most outlandish) tale is that he was hit by his own batted ball as he slid into second base! 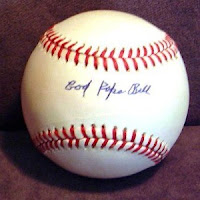 Before his baseball career got started, Bell worked at the creamery at Mississippi A&M College (now Mississippi State University) and at the college's agricultural experiment station, where he learned about growing cotton. He had no intention of becoming a farmer, however, and left Starkville when he was seventeen and moved to St. Louis, where he planned to attend school while living with his brothers. Bell started playing baseball, though, and school was soon a forgotten goal. At the time, of course, major league baseball was segregated, so Bell spent his entire career in the negro leagues. In 1922, the St. Louis Stars, a team in the National Negro League, signed him as a pitcher for $90 a month. After witnessing Bell's speed, the Stars switched him to the outfield. He remained with the Stars until 1931, when the National Negro League disbanded because of the Depression.

In 1932, Bell joined the Detroit Wolves of the East-West League. After the team folded in mid-season, he joined the Kansas City Monarchs for the rest of the season. The next year, he played for the Pittsburgh Crawfords, along with Satchel Page. By 1937, Bell joined other stars in the Dominican Republic. At the age of 39, he returned to the United States to play for the Chicago American Giants, and the next year joined the Homestead (PA) Grays, where he finished his career as a player. He also played for a time in the Mexican League, where his .437 batting average in 1940 was the highest in Mexican League history. In 1948, he managed the Kansas City Monarch's B-team, and tutored future stars Ernie Banks and Elston Howard before retiring. After baseball, he worked as a custodian and night security offi­cer at the St. Louis City Hall, retiring from that job in 1970."Cool Papa" Bell died in his home in St. Louis, Missouri, at age 87. He is buried in the St. Peter’s Cemetery in Normandy, Missouri. In his honor, the city renamed Dickson Street as "James 'Cool Papa' Bell Avenue". 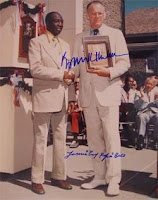 During his baseball career (1922-1946), Bell's batting average was .341. Against Major League players in exhibition games, he batted .391. In one season alone (1933), he stole 175 bases, hit 63 doubles, 17 triples, 11 home runs, and batted .379. In 1974, at age 69, "Cool Papa" Bell was inducted in the National Baseball Hall of Fame. In 1995, he was recognized posthumously with induction on the Mississippi Sports Hall of Fame and in 1999 a historical marker was erected in Starkville to mark his contribution to Mississippi sports history.