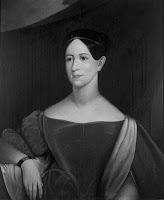 One of the most famous figures to have lived in Mississippi, and the only Mississippi-born president (albeit of the Confederate States of America), is, of course, Jefferson Davis. Davis' retirement home, Beauvoir, still stands, a remarkable survivor of numerous hurricanes, most notably the latest and greatest, Hurricane Katrina. Another president, Woodrow Wilson, also spent time on the Mississippi Gulf Coast, vacationing at the "Dixie White House," which was lost during Hurricane Camille. Less well known, perhaps, is another occupant of the White House who lived on the Gulf Coast for a time, Sarah Jackson. Sarah Yoke Jackson (1803-1887) was the daughter-in-law of President Andrew Jackson. A native of Philadelphia, Pennsylvania, Sarah, along with a sister, was orphaned when her mother died during a trip to New Orleans in 1820 (her father, a sea captain, died five years previous). Luckily for Sarah (above, right) and her sister, the family was wealthy, and they were raised by two aunts. Sarah married relatively late in life (at least by 19th Century standards - at age twenty eight), and became the wife of Andrew Jackson, Jr. (left), the adopted son of Andrew Jackson. Some might say that she had the misfortune of marrying Andrew Jackson, Jr., as the president's namesake never quite achieved success in his life (but that's another story entirely). Married in 1831, the couple honeymooned (incredibly) at the White House before moving to Tennessee to live at the president's plantation, The Hermitage. When the main house burned in 1834, the couple moved back to Washington and lived in the White House.

Before his inauguration, Andrew Jackson's wife Rachel died, so there was no “First Lady” per se in the Jackson White House. However, the president's niece, Emily Donelson, had filled in as the de facto First Lady, at least until Sarah moved in. Now with two young ladies in the White House, Jackson allowed both to act as First Lady, although he referred to them as the White House hostess and the "Mistress of he Hermitage" respectively. No doubt, this arrangement suited neither Emily or Sarah entirely, but it apparently worked. In 1836, however, Emily died of tuberculosis and Sarah assumed the role of unofficial First Lady alone for the remainder of Jackson's term. 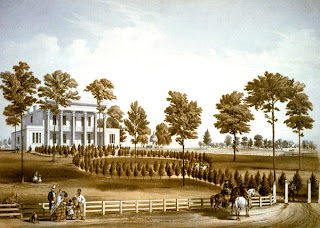 When Jackson's term expired, he retired to The Hermitage, which in the meantime had been rebuilt. Along with Jackson went his son and daughter-in-law, and all three remained at The Hermitage until the former president's death in 1845. Andrew and Sarah added a son - Samuel - to the family in 1837. After the president’s death, Andrew and Sarah continued to live at The Hermitage, but then somewhat abruptly moved to Mississippi prior to the Civil War. Exactly why the Jacksons chose to move a relatively remote part of the Mississippi Gulf Coast is unknown, but the reason they left The Hermitage is clear - Andrew Jackson, Jr. had amassed a great deal of debt and sold the plantation to the State of Tennessee. Rather than pay off his debts, however, he purchased not one but two plantations in Mississippi (the other plantation was known as the Clifton Plantation). 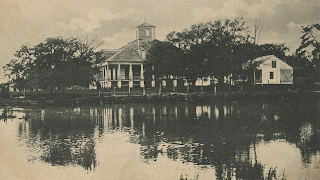 Sea Song Plantation, located within the bounds of present day Buccaneer State Park in Waveland, was purchased by Andrew and Sarah Jackson in 1857. The house and plantation was at that time known as the “Russ Place.”  The original house is believed to have been built about 1840. While renovating the Russ house (the rooms were considered to be too small), the main house burned in March, 1858. The Jacksons decided to begin rebuilding immediately, and the new house was completed in 1859. Sarah named the house “Sea Song” soon after its completion. Along with other amenities, the house included a 600-foot ocean pier, from which she regularly bathed in the warm waters of the Gulf. The house and the area seemed to please Sarah and the rest of the family, but happiness would not last long. In the summer of 1860, the area was struck by three successive hurricanes. With the house surrounded by water and with Andrew attending to "business" elsewhere, Sarah proclaimed that she was “very anxious to leave this place, and no earthly power will ever induce me to return to it.” At the same time, Andrew’s prolific spending habits forced the sale of both Clifton Plantation and Sea Song Plantation in 1861, and the Jacksons moved on to Louisiana. 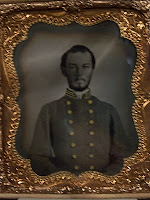 During the Civil War, the Jackson's only child, Samuel (right), was killed at the Battle of Chickamauga fighting with the 44th Tennessee Infantry. Then, in 1865, Andrew died of lockjaw. Left without her husband or her son, Sarah Jackson, the former "First Lady," was in desperate straits. Luckily, she was allowed to return to The Hermitage through an arrangement with the State of Tennessee, where she resided as a "tenant at will" until her death in 1887.

As for the Jackson's house on the Gulf Coast, the property was owned by the DeBlieux family in the late 19th Century. Several alterations were made to the house in this period. In 1923, ownership of the house passed to Robert E. Jones, a black Methodist Episcopal Church bishop who founded Gulfside Assembly (again, another good story). After that, the house was used as a dormitory for Gulfside Assembly. Unfortunately, the house burned on August 30, 1935. The portion of Gulfside Assembly upon which the house stood has since become part of Buccaneer State Park.