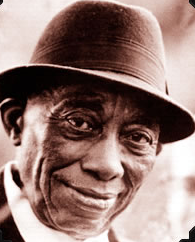 Born on or about July 3, 1893, in Teoc, Mississippi, John Smith Hurt and his family moved to Avalon, a town on the edge of the Mississippi Delta, in 1895. One of ten children, he dropped out of school at the age of nine to begin working as a farmer to help support his family. In 1902, Hurt picked up a guitar his mother had purchased for him (for $1.50). Self-taught, Hurt developed a distinctive three-finger style that bears little resemblance to other musicians in the area. He also developed proficiency with the harmonica but was always a self-accompanied musician. Rarely traveling outside his own area, Hurt was a favorite with the Carroll County dance circuit, but was little known outside the county. It was not until 1912 that he started playing to a wider Mississippi audience, going as far as Jackson. Popular among whites as well as blacks, Hurt’s first recording session was in Memphis in 1928. Willie T. Narmour and Shell W. Smith, two white country musicians from Carroll County, had recommended him to their record producer, Tommy Rockwell. 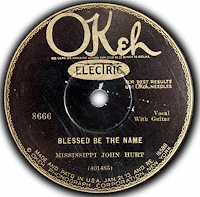 Hurt recorded eight songs for the Okeh label, two of which were released and sold well: "Frankie" and "Nobody’s Dirty Business." In Memphis for the same recording session was St. Louis guitarist and pianist Lonnie Johnson. Hurt later recalled that Blind Lemon Jefferson and Bessie Smith were also in town, although he returned home without seeing any of them perform. Hurt was called to New York for another session in December, 1928, where he recorded twelve additional songs, including "Avalon Blues." Again, Hurt returned home to Avalon to farm and play music for local groups. These two sessions were the extent of Hurt’s recording before the Great Depression curtailed record sales. Outside of music, John Hurt worked a variety of jobs, including a five-month stint with the Illinois Central Railroad prying up and leveling railroad ties for $100 a month. During the Great Depression, he worked for the WPA felling trees and building dams, levees and gravel roads for $3 a day. He also farmed, a life he continued to lead until the 1960s.

In the ‘60s, John Hurt’s music career took off again after a thirty year lapse. Without his knowledge, the American Folk Music series reissued two of his singles from his recording sessions in the 1920s. With the new release, he gained new fans, but most assumed he was no longer alive. Meanwhile, Hurt continued to farm in rural Mississippi, living without electricity and unable to drive a car (he never learned). Then, in 1963, Tom Hoskins, a blues enthusiast, found tiny Avalon, Mississippi, and – much to his surprise – found Hurt there alive and well. After some convincing (Hurt thought he might be the police), Hoskins convinced the reclusive bluesman to come to Washington, DC, to begin a new career in music. And he did just that. Moving to the nation’s capital in September, Hurt and his entire family moved to an apartment on Rhode Island Avenue N.W. Suddenly popular with a much wider audience that the local dance circuit in Carroll County, Hurt started earning real money (as much as $200 a week) playing festivals and recording albums on the Piedmont label. He also had an extended recording session with the Library of Congress on July 15, 1963. Also in July, Hurt made an appearance at the Newport Folk Festival alongside John Lee Hooker, Joan Baez, and Bob Dylan and others. 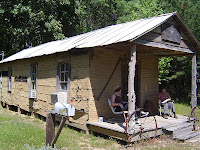 For several years in the mid-1960s, Mississippi John Hurt (he had adopted “Mississippi” as a stage name back in the ‘20s) was a commercial success and was immensely popular with an entirely new fan base (many of them white) and was a favorite of other musicians. One artist heavily influenced by Mississippi John Hurt was Doc Watson, who recently passed away (in May 2012). Aside from his guitar style, Watson said that Hurt “was one of the finest men that I have ever met. He was a kind, gentle-hearted person who loved people and loved life.” Despite all the fame and attention, however, the diminutive Hurt (he was only 5’4”) left it all behind when he had saved enough money to buy a house back home in Mississippi. Purchasing a home in Grenada in 1965, Hurt died on November 2, 1966, after suffering a heart attack. He is buried at the St. James Cemetery in Carroll County, where his grave is marked with a simple headstone (below right). In 2002, Hurt’s granddaughter moved his three-room sharecropper’s house (above right) from Teoc to Avalon, where it now serves as the Mississippi John Hurt Museum. Both a State Historical Marker and a Blues Trail marker have been erected to honor Hurt’s contribution to Mississippi’s musical heritage.