"...the bullets rained about me like hail:" The Battle of Coffeeville 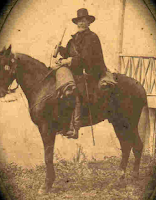 In November, 1862, Union Major General Ulysses S. Grant began a movement south from Grand Junction, Tennessee, along the Mississippi Central Railroad. The object of this expedition, known as the Mississippi Central Campaign, was the defeat of Confederate General John C. Pemberton’s forces and, ultimately, the capture of Vicksburg. As Grant’s campaign began, the Confederate defenders were positioned behind extensive fortifications along the Tallahatchie River near Abbeville. As the Federal advance reached Holly Springs, Lumpkin’s Mills (present day Wall Doxey State Park) and Waterford, Pemberton ordered a retreat through Oxford, Water Valley and Coffeeville to a new defensive line on the south bank of the Yalobusha River, with Grenada as the Confederate headquarters. This move was prompted by the sudden appearance of a Union cavalry force on Pemberton’s left flank. A sharp skirmish at Oakland on December 4 between forces under Union General C.C. Washburn and Confederate Lt. Col. John Griffith convinced Pemberton that the Tallahatchie line was no longer tenable. For more on the battle of Oakland see
http://andspeakingofwhich.blogspot.com/2012/06/battle-of-oakland.html.

As Pemberton pulled his forces back to the line of the Yalobusha, Grant followed. At the head of the pursuit was Union cavalry commanded by Grant’s chief of cavalry, Colonel Theophilus Lyle Dickey (above). Pressing the Confederate rear guard, Dickey’s troopers approached Coffeeville on December 5. Waiting in ambush for them, however, were Confederate troops under the command of General Mansfield Lovell (right), positioned in the thick woods about one mile northeast of town. As many of Lovell’s men had been prisoners in the north after surrendering at Fort Donelson, Tennessee, and had only recently returned south, they were particularly anxious to fight the bluecoats. To add to their firepower, Generals Lovell and Lloyd Tilghman positioned artillery from the Point Coupee Louisiana Battery and Hedden’s Kentucky Battery on small hills that allowed them to fire over the Confederate troops lying hidden in the woods. The Confederates arrayed at Coffeeville included men from the 8th Kentucky Infantry, the 9th Arkansas Infantry, the 23rd, 26th 31st and 14th Mississippi Infantry, and the 7th Tennessee Cavalry. The 3rd Kentucky Infantry and the 18th Tennessee cavalry were held in reserve. 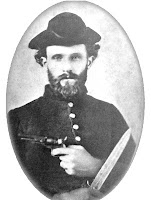 Late in the afternoon, the Union forces, composed of cavalry from the 7th Kansas, 5th Ohio, 2nd Iowa, 3rd Michigan, 4th and 7th Illinois and Battery G, 2nd Illinois Artillery, were moving slowly down the road, unknowingly toward the waiting Confederates. As the Federals advanced in line of battle on foot (with every fourth man holding the horses), Confederate skirmishers retreated toward their lines. The Federal artillery lobbed shells in the direction of the Confederate skirmishes to hurry the rebels’ retreat. After one of these shells narrowly missed killing a group of Confederate officers, including Lovell, Tilghman and Col. W.H. “Red” Jackson of the 7th Tennessee Cavalry, Lovell ordered the two batteries to open fire. The 7th Kansas was in the center of the Union line and slightly in advance when the Confederate cannoneers opened up. Caught by surprise, the Jayhawkers quickly retreated to the main Federal line. With both sides exchanging fire, the rebels charged. Forming their line on a ridge, the Federals were soon flanked and broken, despite the courage of Col. Albert Lee of the 7th Kansas, who personally sighted and fired a gun from the 2nd Illinois Artillery. Seeing that he was outflanked by the charging Confederates, however, Col. Lee ordered his men to fall back. Killed in the fighting was 3rd Sergeant R. W. Roberson, a soldier in Co. A, 23rd Mississippi (the "Blount Guards"). Roberson (above) was from Tippah County.

Attempting to slow the Confederate advance and allow the rest of the Union cavalry to escape, Lt. Col. William McCullough of the 4th Illinois led a detachment to form a rearguard. Born in Flemingsburg, Kentucky, in 1811, McCullough (right) was a veteran of the Black Hawk War. In 1840, McCullough’s right arm was torn off by a threshing machine. According to an eyewitness account of the incident, the remainder of his arm was amputated without anesthetics, after which McCullough sat up and calmly smoked a cigar. The same year, he was elected sheriff of McLean County, Illinois and later served several terms as circuit clerk. In that capacity, he became acquainted with a young lawyer named Abraham Lincoln, and the two became friends. Due to his association with Lincoln, he was immediately promoted to Lieutenant Colonel of the 4th Illinois Cavalry at the outbreak of the Civil War, despite having one arm and a bad eye. 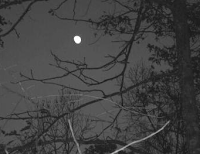 Bravely attempting to stem the tide, McCullough and a small detachment waited on the advancing Confederates. Unfortunately for McCullough, the 14th Mississippi Infantry, under the command of Major Washington Lafayette Doss, had slipped up a valley and appeared suddenly on the left flank of the Illinois troopers. As they turned to face the new threat on their flank, McCullough was wounded. Dismounting his horse, he was hit twice more and died on the spot. He was the highest ranking officer to fall in battle at Coffeeville. In addition, several of McCullough’s men and their horses were killed, wounded or captured in the final action of the day, which occurred well after dark under the light of a full moon. The image above was taken by Don Sides of Coffeeville on the anniversary of the battle in 2000.

Casualties for the battle are difficult to determine. Of the approximately 5,000 men engaged, the Federals lost an estimated 125 killed, wounded and missing, while the Confederates probably lost about 50 men. When word reached President Lincoln concerning the death of William McCullough, his old friend from Illinois, he wrote a letter to Miss Fannie McCullough, the colonel’s yonng daughter (one of eight children). The letter, dated December 23, 1862, is as follows:

It is with deep grief that I learn of the death of your kind and brave Father; and, especially, that it is affecting your young heart beyond what is common in such cases. In this sad world of ours, sorrow comes to all; and, to the young, it comes with bitterest agony, because it takes them unawares.The older have learned to ever expect it. I am anxious to afford some alleviation of your present distress.  Perfect relief is not possible, except with time. You can not now realize that you will ever feel better. Is not this so? And yet it is a mistake. You are sure to be happy again.To know this, which is certainly true, will make you some less miserable now. I have had experience enough to know what I say;  and you need only to believe it, to feel better at once. The memory of your dear Father, instead of an agony, will yet be a sad sweet feeling in your heart, of a purer, and holier sort than you have known before.
Please present my kind regards to your afflicted mother.
Your sincere friend,
A. Lincoln
After McCullough’s body was recovered from the battlefield, he was taken back to Illinois and buried in the Evergreen Memorial Cemetery in Bloomington. His weathered tombstone (above right) remains there today.

Despite the loss of Lincoln’s friend, there were relatively few casualties at Coffeeville. Even so, the victory at Coffeeville was important for the Confederates, as the action forced the Federal army to fall back to Water Valley and giving Pemberton time to pull all of his forces into the defenses south of the Yalobusha at Grenada. The site of the battle of Coffeeville is located near the intersection of the Pine Valley Road and the Old water Valley Road northeast of Coffeeville. All of the battlefield is on private property. Today, December 5, 2012, is the 150th Anniversary of the engagement.

* Note: The title of this article comes from a quote from Fletcher Pomeroy, a soldier in Co. D, 7th Kansas Cavalry.