In 1841, a little more than ten years after the City of Memphis was founded, Henry Van Pelt printed the first issue of the Memphis Appeal, a weekly newspaper. Van Pelt printed the fledgling newspaper from his home located on the Wolf River. Printed on single sheets of paper, the Appeal was anything but appealing. However, it served a need in what was at the time a hard-bitten, backwater frontier town on the Mississippi. Van Pelt (right) was a Democrat, and the paper reflected his political views, which were generally in opposition with the majority of Memphis citizens, who were Whigs. They, of course, had their own papers to voice their concerns. As Memphis grew into a real city, however, so did the Memphis Appeal. By 1847, it went from a weekly publication to a daily paper and with it a new name: the Memphis Daily Appeal. On April 23, 1851 – just two days after the paper celebrated its ten-year anniversary – Van Pelt dropped dead, and the newspaper changed hands.

As sectional conflicts over slavery and other issues exploded on the scene, Benjamin Dill took over as editor and John R. McClanahan became the paper’s printer. A native of Georgia, Dill had been a lawyer and worked as a bank cashier in Mississippi and Missouri before moving to Memphis and taking over the Appeal. Although neither were too outspoken on the issues of the day – other than voicing support for “state’s rights” – by the beginning of hostilities both men were thoroughly on board with secession and enthusiastically supported the Confederacy. As a result, the Memphis Daily Appeal became a very pro-Confederate newspaper. 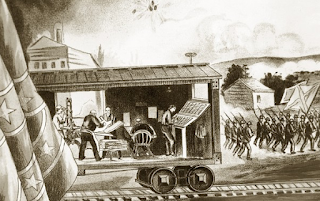 In the spring of 1862, Union forces, fresh from their victories at Shiloh and Corinth, threatened to capture Memphis, and on June 6 the city surrendered to a Federal river fleet. With their very public stance in support of the Confederacy, Dill and McClanahan didn't hang around to find out how the Yankees would treat them. Not only did they flee the day before the Federals arrived, they took the newspaper with them, loading all of the presses and other equipment on a boxcar (seen here in this artist's rendering). Thus began the strange saga of the "Moving Appeal."

Heading south, the newspapermen set up shop in Grenada, Mississippi. On June 9, just three days after leaving Memphis, the publishers of the Appeal explained that they moved to Grenada in order to continue their advocacy of the Southern cause. "So long as two or three States are gathered together in the name of the Confederate States," they wrote, "so long will we be found advocating, as zealously as ever, a continued resistance to the tyranny which a haughty foe are endeavoring to establish over us..." The Memphis Daily Appeal continued to publish from Grenada until until November 29, when Grant's approaching army during the Mississippi Central R.R. campaign forced Dill and McClanahan to relocate yet again, this time to Jackson. 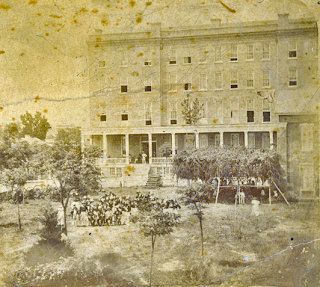 The Appeal remained in Mississippi capital for about five months, and established itself in the Bowman House Hotel (right), where above his room McClanahan hung a banner which read "Memphis Headquarters." During the paper's time in Jackson, there were shortages of ink and other necessities, but they improvised enough to continue publication. Then, in mid-May, Union troops once again got too close for comfort (it was Grant and Sherman this time) and the presses were loaded onto a flatboat and sent across the Pearl River, barely escaping capture by Sherman's men on May 14, 1863. Sherman, of course, despised all newspapers and reporters. No doubt, he would have been delighted to rid the world of the "Moving Appeal."

Heading east, the Appeal next stopped in Meridian, but kept moving into Georgia. From Atlanta, the Appeal published for the first time in Georgia one year after leaving Memphis, on June 6, 1863. The Appeal found a home in Atlanta for a whole year and had a healthy circulation of nearly  15,000.  As before, however, approaching Union armies threatened the paper's existence and the Appeal was on the move again in June 1864 as Sherman began bombarding Atlanta. Even though the presses were shipped to Montgomery, the Appeal valiantly continued to publish news for the men in the trenches until as late as September 2. A few weeks later, presses were running again in Montgomery, where they remained until April, 1865. 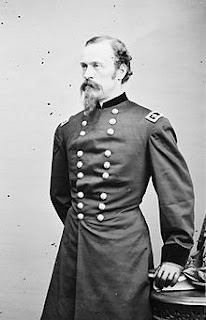 On April 9, 1865, Lee surrendered the Army of Northern Virginia to Grant at Appomattox. The same day, Confederate forces were overwhelmed at Fort Blakeley, Alabama, on the northeast side of Mobile Bay. Clearly, the war was winding to a close. In Montgomery, Union cavalry forces under Brig. Gen. James H. Wilson (left) went on an extended and destructive raid through Alabama and into Georgia (the same raid in which the University of Alabama in Tuscaloosa was burned to the ground and during which Jefferson Davis was captured). To try and escape Wilson, the paper and it's presses fled to Columbus, Georgia. In Columbus, however, the Appeal staff was finally captured, including Benjamin Dill. When Dill was taken to General Wilson and introduced, Wilson is said to have exclaimed "Have we caught the old fox at last? Well I'll be damned!" While he might have finally captured the editor, the valuable press was nowhere to be found, as it had been spirited away to Macon and hidden to escape destruction. The "Moving Appeal" had at last been grounded.

With the end of the war, the remaining members of the newspaper staff made their way back to Memphis. Within six months the Memphis Daily Appeal was publishing again, using the old wartime press which had been rescued from its hiding place in Macon. The once-secessionist editors now accepted the verdict of the Union through the force of arms and tried to look toward a new day for the paper and the city. For Dill and McClanahan, however, the journey would end soon. John McClanahan died after falling out of a window of the Gayoso Hotel and Benjamin Dill (right) died six months later of illness. The Appeal, however, did live on and today is known as the Commercial Appeal. If not for the heroic efforts to keep the presses running throughout the war, the paper might never have survived. Along the way, as another Southern newspaper put it, "Nothing in newspaperography can compare with [the Appeal's] strange, eventful career."