A Second Work of Grace: The Life and Times of "The Mississippian" 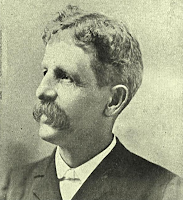 In the latter part of the nineteenth century and into the first quarter of the 20th century, a man popularly known as “The Mississippian” became a leader in the “Holiness” movement, was a popular evangelist and a prolific author. Despite his many achievements, however, he died far from his native state and entirely destitute. A native of rural Yazoo County, Mississippi, the firebrand preacher was born on April 4, 1848 (165 years ago today). After growing up on several plantations and experiencing all the excitement of life in the Delta (including killing an escaped tiger near Bee Lake near Yazoo City at age fifteen), he enlisted in Wirt Adams’ Confederate cavalry in 1864, just months before the Civil War ended. In 1867, he entered the University of Mississippi and graduated two years later. After studying medicine for a year, he met and married Laura Reid. Moving to Louisiana and then to Virginia, he and Laura returned to Mississippi where he was converted and answered the call to preach in 1874, beginning a long career in the Methodist Church. After his conversion, he told his wife that "I'm not going to Hell after all." 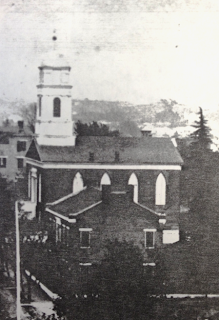 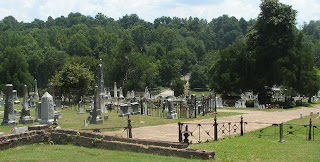 The young preacher’s first appointment in the Mississippi Conference was on the Vernon Charge (which included two churches). Later serving in Jackson, Madison, Brandon and Crystal Springs, his biggest church in Mississippi was at Crawford Street in Vicksburg (right). He was there just one year (1881-1882) but it was a tragic and momentous year. On March 1, 1882, Laura died in the parsonage from “prostration of the nervous system." After the funeral, which was conducted by Rev. Charles Kimble Marshall (a prominent Methodist clergyman), Laura, just thirty-two years old, was laid to rest in the Cedar Hill Cemetery, leaving behind a grieving husband and four small children. In mourning Laura's death, the church at Crystal Springs adopted a resolution expressing sympathy for their former pastor. In the resolution, the congregation wrote that “we tender to our bereaved brother our words of love and sympathy, in his great affliction. May that cup of consolation, which he pours out for others, be his in double measure in this his hour of sorrow.” Years later, in a semi-autobiographical work entitled Pastoral Sketches, he wrote about a grieving husband visiting the grave of his beloved wife. Set in a cemetery quite similar to Cedar Hill (right), where the “soft coo of a dove came floating from a distant tree,” the husband, with children in tow, “heard the far-away whistle of a steamboat on the river. How faint it was, and plaintive,” he wrote. It seemed to sorrow with him. O if he could take passage on it, sail away from the heartache and loneliness. O if he could go to the end of the valley where the white clouds were piled up against the horizon and turn one of them as a hinge and raise up the curtain of blue get away from a world that seemed now so utterly empty and lonely." Broken by grief and sorrow, the young preacher left Vicksburg and moved to New Orleans for a fresh start.

In New Orleans, "The Mississippian,” whose given name was Beverly Francis, was pastor at St. Charles Avenue Methodist Church (now called Rayne Memorial, named for William Rayne, who was mortally wounded at Chancellorsville). Because Louisiana had instituted a lottery, difficulties soon cropped up with some of the prominent members of the church who were actively engaged in the lottery. One well-heeled member of the church was the president of a bank with large deposits from the Lottery Corporation. One day, he received a pastoral visit at his office and was asked to end "this great swindling business and iniquitous corporation.” When the bank president stated that he could not, for the sake of his business, sever his relationship with the Lottery, his pastor advised him to resign from the bank presidency. "He answered stiffly and freezingly," the preacher later wrote, "that he could not think of doing such a thing. I then said to him, as I saw he wished me to leave, 'But I am compelled to tell you in all kindness that we cannot receive any more of your money in our church.'" Rebuked, the bank president left the Methodist Church, blaming the whole affair on the hardness of the preacher. He later joined the Presbyterian Church, where presumably the proceeds from the lottery were more acceptable.

A year or more after his first wife died, Beverly Francis married Modesta Burke, with whom he produced several more children. Modesta’s father, who died in 1879, was once a millionaire who owned several large sugar and cotton plantations. Elected to both the city council and the state legislature (and briefly as the mayor of New Orleans), Glendy Burke and his wife Czarina were ruined financially by the Civil War. Before the war, however, he had a steamboat named for him. A side-wheel packet steamer, the Glendy Burke, which was owned by a firm in Vicksburg, launched in 1851and sank near Cairo, Illinois, in 1855. The boat, however, was the subject of one of Stephen Foster’s most popular songs, appropriately named “The Glendy Burk,” minus the 'e.' Burke was also a lay minister, though not in the Methodist Church. Instead, he was a member of the Church of the New Jerusalem, part of the Swedenborgian tradition. He, of course, never knew his new Methodist son-in-law.

Perhaps due to the flare-up with the lottery issue, the good reverend moved to the Carondelet Street Church in 1887. It was during this pastorate that he was transformed into a "holiness" preacher after receiving the "blessing of sanctification" in his study one day (following an altar call at Seashore Campground in 1888). Thereafter, Beverly Francis became a leading proponent of the "Second Work of Grace" movement. Gaining prominence as a revival preacher, he was much in demand and was extolled as "the Spurgeon of the American pulpit" by C.K. Marshall. Unlike other members of the "holiness" movement at the time, however, he did not advocate leaving the Methodist Church but preferred to reform the church from within.

Moving to St. Louis, Missouri, in 1891, the fiery preacher once again ran into trouble with members of his congregation, this time at Centenary Methodist Church (left), the controversy being the influence of Freemasonry.  Although he continued to draw crowds, he was forced to move to another church in St. Louis the very next year. About this time, he started churning out books on many subjects (mostly on religion), including the aforementioned Pastoral Sketches (lower left), published in 1896. By this time, he had visited the Holy Land and toured Europe (a trip provided by the Carondelet Street Church) and had earned a Doctorate of Divinity degree from Centenary College. In 1894, he became a full-time evangelist after spending just one year at First Methodist Church in St. Louis. In this capacity, he traveled extensively throughout the United States and continued to write books, eventually publishing more than thirty. Although he was a popular revivalist and "Holiness" preacher, Beverly Francis began to experience health problems and in 1918 was hit by a trolley car in Tacoma, Washington. While his injuries were not life-threatening, he never fully recovered and after several years of hospitals, sanitariums, and nursing homes, died in 1931 in Illinois. At the time of his death, he was almost completely destitute. His body was shipped by train to Vicksburg where he was laid to rest next to his first wife Laura and two of his sons (his second wife preceded him in death). To pay for his funeral, several friends, among them a number of Methodist preachers, made donations. The funeral service was conducted by Rev. Nolan B. Harmon, Sr., who was pastor of Crawford Street Church at the time. "The Mississippian" had finally come home.

Today, Rev. Beverly Francis Carradine is still regarded as one of the great preachers of the early “Holiness” movement. For most people, however, his grandson and great-grandsons are much more widely known for their skills on the silver screen. John Carradine was the son of Reed Carradine, the first-born of Beverly and Laura Carradine (and one of the sons buried in Vicksburg). Born in 1906, John appeared in numerous films, including The Grapes of Wrath and The Ten Commandments, and was a regular on “The Munsters” as the mortician, Mr. Gateman. Three of sons also became actors: David (right), Keith and Robert Carradine. David Carradine, of course, is best known for his role in the popular television show “Kung Fu.” He died in 2009 in Bangkok, Thailand, under mysterious circumstances. In 1980, all three brothers appeared in the western classic The Long Riders as the Younger brothers.