Charles Boster and the "Cottage by the Sea" Hotel 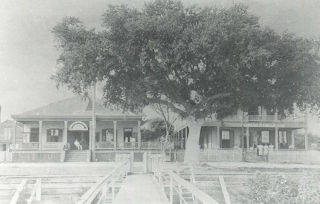 One of the many buildings lost during Hurricane Katrina was the “Cottage by the Sea” tavern in Pascagoula. Owned and operated by an old seaman, the former resort hotel and bar dated from the 1870s. In its day, the “Cottage by the Sea” was noted for “all sorts of curiosities of the Mexican Gulf and Carribean Sea” picked up by the owner during his travels around the world. As interesting as the tavern’s curiosities must have been (along with an extensive selection of spirits), the adventures of the tavern’s proprietor, “Captain” Charles Boster, is perhaps of equal interest.

Charles Boster was a native of Germany, born in Hamburg in 1828. After immigrating to the United States, he enlisted in the U.S. Navy and served on board the frigate USS Cumberland. Built at the Boston Navy Yard, the Cumberland was commissioned in 1843 and served initially in the Mediterranean and then during operations during the Mexican War. Boster was one of the crewman during that conflict. Long after Boster moved on to other endeavors, the Cumberland (left) played a role in one of the most dramatic moments of the Civil War, albeit not a happy one for her crew. After serving in the blockade squadron off the Atlantic Coast and participating in the capture of Forts Hatteras and Clark in 1861, the Cumberland was at anchor off Newport News when she was rammed and sunk by the CSS Virginia, formerly known as the Merrimac. The Virginia, of course, was an armored vessel (soon to be engaged in the famous duel with the Monitor) and had no problem dealing a fatal blow to the wooden and outdated Cumberland. 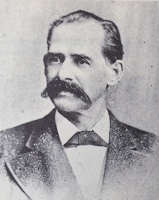 After serving on the Cumberland during the Mexican War, Boster (right) sailed about the world for a time (probably as a crewman) and then signed on to an Arctic whaler for three years. In the 1850s, he moved to New Orleans and worked in the mercantile and steamboat business. Apparently, he was already acquainted with spirits (of the liquid variety) as he signed on as a bartender aboard the steamship Creole, which served the Gulf Coast region. In addition to carrying passengers to and from New Orleans, the Creole was frequently hired out as a troop transport ship. For example, in July 1848 the Creole transported 360 men and 8 officers with the 3rd U.S. Infantry. The charge for the trip was $1.50 per enlisted man and $5.00 per officer. Horses were charged the same rate as officers. If Boster ever had the opportunity to serve drinks to a ship full of soldiers, the odds are he made a hefty profit. In 1850, the Creole played a major part in a high-sea adventure with international intrigue. 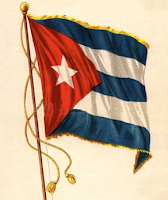 In 1849, a Cuban exile, Narciso Lopez, organized a filibustering expedition to “liberate” Cuba from the Spanish. After recruiting 600 volunteers (mostly other Cuban exiles from New York City), Lopez formed his expeditionary force and placed them on Round Island in the Mississippi Sound. Lopez planned to transport them to Cuba on three ships, but President Zachary Taylor seized the ships and eventually the volunteers were forced to leave Round Island and disband. The next year, Lopez tried again, this time focusing on finding support in the South. After failing to enlist the help of both Jefferson Davis (who was offered a “very fine coffee plantation” for his involvement) and Robert E. Lee, Lopez found a willing supporter in Mississippi Governor John Quitman and other Southern politicians, all of whom hoped that Cuba could be brought in as a slave state. Lopez was even honored as a special guest for several days at the Governor’s Mansion in Jackson by Governor Quitman. In May, 1850, Lopez, aboard the Creole, landed at Cardenas, Cuba, with 600 men. After a skirmish with loyal Cubans, Lopez took the town, but only for a day. The local support he had envisioned never materialized (perhaps they were unaware they needed to be “liberated”) and he was forced back on board the Creole. Retreating to the U.S., the expeditionary force landed at Key West with a Spanish warship in close pursuit. On May 21, the Creole was seized by the U.S. government for violating the Neutrality Law of 1818. Lopez was indicted by a Federal grand jury, as was Governor Quitman, which forced his resignation (also under indictment was his friend and former U.S. Senator from Mississippi John Henderson). No one was ever convicted, and Lopez tried again the next year. This time, the Spanish forces surrounded his men and executed many of them, including Lopez. With Lopez’s death, the hopes of seizing Cuba as a slave state also died. One legacy of the expedition, however, is the flag designed by Lopez for the failed expedition. His flag, which was first flown on board the Creole, is the current Cuban national flag. 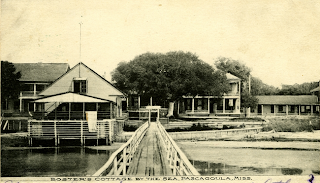 Whether Charles Boster was on board the Creole during the Cuban expedition is unknown, but in 1878 “Captain” Boster (no doubt a self-promotion) settled in Pascagoula and opened a tavern on the beachfront. Adding another building to serve as a hotel about 1889, Boster’s “Cottage by the Sea” became a popular resort. In 1895, a publication called Along the Gulf described the enterprise as follows: “It is only fair to state that no finer table, no better beds, no more airy rooms and no more magnificent view can be obtained at any of the dozen or more resorts of this kind along the Gulf, and Mr. Boster, being a genial and painstaking host is very popular among his guests.” The bar was made of polished hard wood with “mirrors of various sizes behind it.” Hanging behind the bar and above the office door was a six-foot-long fish. Caught off the coast of Florida, the fish was said to be of particular interest to visitors from the North. Boster used some of the fish’s scales as business cards, a unique and memorable calling card to say the least. The adjacent hotel could accommodate up to seventy people and was lighted with gas lamps throughout. Extending from the hotel into the Gulf was a pier with several dressing rooms built on it to accommodate guests who wished to take a dip in the warm Gulf waters. To add to the convenience,  the hotel was connected by telephone with “all parts of Pascagoula, Moss Point and Scranton.” Scranton, as an aside, was at the time considered a “modern city in every sense of the word, equipped with telegraph, telephone, express, electric lighting, waterworks and ample banking facilities.” Incorporated in 1870 and named for Scranton, Pennsylvania, the town merged with Pascagoula in 1904.
From its founding until the first part of the 20th Century, the “Cottage by the Sea” tavern and hotel resort earned a reputation as an ideal summer get-away. The resort’s reputation was no doubt enhanced by the fine selection of wine and other spirits and the equally spirited owner, who had certainly seen his share of the world. Because of his reputation as a successful entrepreneur, “Captain” Boster had also earned the respect of his fellow citizens and held several local positions, including sitting as a member of the Board of Health. He was also active in the local Masonic Lodge. All good things must come to an end, however, and Boster sold the property in 1910 when he was just 82 years old. He died a year later and is buried in Greenwood Cemetery in New Orleans. The “Cottage by the Sea” was sold several more times through the years and was used as a restaurant and a private residence. In 2005, the venerable old tavern was swept away by Hurricane Katrina. Although gone now, the site of the “Cottage by the Sea” will soon be identified by a historical marker.