Early on the morning of April 17, 1863 (a Friday), three regiments of Union cavalry under the command of Col. Benjamin H. Grierson rode out of LaGrange, Tennessee. Sgt. Richard Surby, a soldier in one of Grierson’s regiments, remembered the morning as a “beautiful one with a gentle breeze from the south.” After leaving LaGrange, Surby and his comrades in blue spent the next two weeks deep in enemy territory, causing damage to railroad facilities, burning stores and depots and destroying bridges and trestles. In the process, the raiders created lots of chaos in the Confederate high command. Riding into Union-occupied Baton Rouge, Louisiana, on May 2, Grierson’s exhausted and dust-covered men had traveled more than 600 miles, losing only three men along the way. Most importantly, Grierson’s raid into Mississippi took Confederate attention away from Gen. Grant’s plans to cross the Mississippi River with his main army. 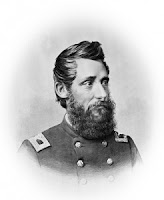 Col. Benjamin Henry Grierson, born in 1826 in Pennsylvania, was an odd choice to lead a cavalry expedition. A music teacher and band director before the Civil War, Grierson (top right) was kicked in the face by a horse at age eight and nearly killed, scarring him for life, both literally and figuratively.  As a result of the accident, he sported a beard to cover the scar and was afraid of horses even as an adult. Although he wasn't an equestrian, he was a good musician. At an early age, he learned to play the flute and then learned the clarinet, guitar, piano and violin. When he was thirteen, he was leader of the Youngstown, Ohio, band. After touring throughout the state in 1840 for the William Henry Harrison campaign (likely playing numerous renditions of "Tippecanoe and Tyler Too"), Grierson later abandoned his musical career in order to make a living as a store clerk, especially after convincing Alice Kirk (bottom right) to marry him in 1854. It was not an easy engagement; her father disapproved of Ben Grierson, who was prone to drinking, had little regard for religion, and smoked to excess (especially cigars). Eventually, though, Alice (who believed in temperance and was a devout member of the Disciples of Christ) agreed to marry him and her father finally gave in. Life was hard, though, and Ben had a very difficult time making enough money to support a family. Faced with financial ruin, Grierson's only hope seemed to be the army, and he saw his chance with the coming of civil war. As luck would have it, the best path for promotion in the Union Army happened to be in the cavalry, so Grierson set aside his dislike of horses and joined the 6th Illinois Cavalry in late 1861. In April 1862, he was promoted to colonel and commanded the unit throughout the winter campaign in north Mississippi. 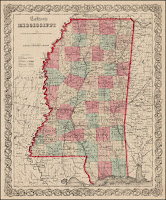 Though not a natural cavalryman, it was Grierson who was picked to lead one of several raids deep into Confederate-held territory in April 1863. To accomplish this task, Grierson was given command of a brigade consisting of his own regiment (the 6th Illinois), along with the 7th Illinois and the 2nd Iowa. All totaled, Grierson had about 1,700 men at his command. They would enter Mississippi without artillery or supply wagons, which meant that they would have neither if needed. When word came down from headquarters about the raid, Grierson almost missed the call. At the time, he was on furlough visiting his family in Jacksonville, Illinois. When ordered to report to La Grange, he hurried back and arrived just in time to take command. Leaving La Grange, the long line of blue-clad troopers wound their way into Mississippi on two parallel roads toward Ripley. Grierson carried with him a copy of Colton's map (seen here) of Mississippi (a hand-colored map showing major roads, railroads, rivers and populated places), a compass and a "Jew's harp." With these simple tools (except for the harp), he would do his best to guide the raiders toward their ultimate goal: the Southern Railroad of Mississippi at Newton. After that, it would up to Grierson to get back by whatever route he deemed best, perhaps even into Alabama It was not an easy assignment for a former music teacher.

On the first day, Grierson's troopers rode thirty miles and encountered no Confederates to speak of. The only incident worthy of note was the capture of "a very good looking hat" from a young man driving a team of oxen.  With no opposition, the day passed without incident, and the  column spent the night at Dr. Ellis' plantation, four miles north of Ripley. It was, according to one of Grierson's men, a perfect spring evening, with the moonlight creating the "most beautiful dreaminess." Though perfect, the beauty of the evening masked the dangers that lay ahead. For the next seventeen days, Grierson's raiders would have to fend for themselves.

In subsequent installments, we will periodically follow the progress of Grierson through Mississippi. April 17, 2013 is the 150th Anniversary of the beginning of Grierson's Raid.