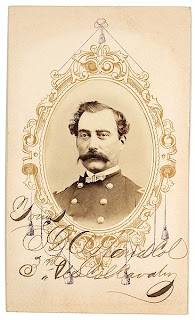 Embury D. Osband was born in Ontario County, New York on June 6, 1832. The son of a Methodist preacher, by the age of fifteen he was teaching in a local school and at age eighteen was the principal of a grade school, despite not attending college. At nineteen, he started a business providing books to schools. In 1856, Osband married and moved to Chicago where he entered a successful news publishing business. All this time, he studied military tactics on his own.

At the outbreak of the Civil War, Osband joined Barker’s Dragoons and later organized Company A, 4th Illinois Cavalry, and served as captain. In 1863, he was promoted colonel and assigned to recruit the 1st Mississippi Colored Cavalry, a unit composed of former slaves. Redesignated the 3rd United States Colored Cavalry, this regiment would become one of the finest Union cavalry regiments serving in Mississippi. In recognition of his abilities, Osband was promoted to Brevet Brigadier General on October 5, 1864. He served ably throughout the war. 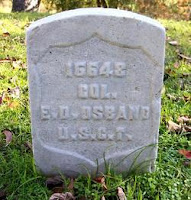 When the Civil War ended, Embury Osband resigned from the army and stayed in Mississippi, planting cotton in Yazoo County. He didn't last long, however, as he died on October 4, 1866. He was just 34 years old. Officially, he died of diphtheria, although some believe he was murdered. Certainly, he would have lots of hostile neighbors in the same area of Mississippi in which he had just led a black cavalry unit against the Confederates. However he died, Embury D. Osband was laid to rest in the Vicksburg National Cemetery, and is the highest ranking officer buried there.