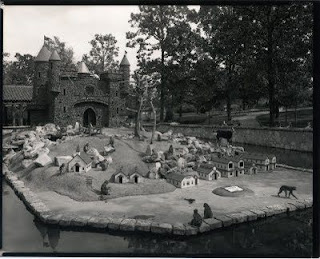 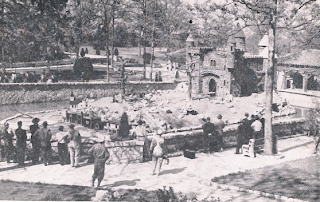 This is "Monkey Island," located at the Jackson Zoo. In 1916, the city of Jackson bought about 80 acres from Samuel Livingston on the western edge of the city. In 1919, some Jackson firemen started collecting exotic animals and keeping them in the central fire station (now the Chamber of Commerce Building). After the animal collection got a little out of hand, the city moved them (the animals, not the firemen) to the Livingston property and created the zoo at Livingston Park in 1921. As the zoo developed, many of the buildings at the zoo were built by the Works Progress Administration (WPA), including the castle (I think), which was used to house several dozen monkeys. Located near the center of the zoo, Monkey Island for decades was a favorite attraction for many visiting the zoo. Sometime during the 1970s, though, zoo officials decided to move the monkeys elsewhere and place flamingos at the castle, though it had nothing to do with a TB outbreak, as is widely believed (that's a local urban legend). The photo above was taken by Jackson photographer Harry Hiatt.
Posted by Jim Woodrick at 9:23 AM