Mississippi Pride Football and the RFL

In the late 1990s, Jackson was one of the sites chosen for a team in a newly formed semi-pro football league called the Regional Football League (RFL). Billed as a "major league of spring football," one of the RFL's marketing schemes was to include players from the area in hopes of attracting fan interest. Several football players of note signed up to play in the RFL, including former West Virginia quarterback and future College Football Hall of Fame inductee Major Harris and former Alabama and Dallas Cowboy running back Sherman Williams (not the paint store). Others included Josh Booty (LSU), Andre Ware (Houston), and Dameyune Craig (Auburn). The Mississippi team was called the Mississippi Pride and had a stylized lion head as its logo. The other teams in the Regional Football League were the New Orleans Thunder, Mobile Admirals, Shreveport Southern Knights, Ohio Cannon and the Houston Outlaws. 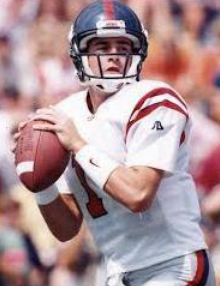 Playing its games in Mississippi Veterans Memorial Stadium, the Mississippi Pride featured several players who had name recognition in Mississippi. The team's quarterback was former Ole Miss QB Stewart Patridge (right). On the defensive side, the roster included Marchant Kenny from USM and former JSU Tiger Terrell Sutton, while the kicker was Mississippi State's Brian Hazlewood. League play began in March 1999 and was supposed to last for fourteen regular season games with a championship game around the Fourth of July. As it turned out, the inaugural season was the only season for the RFL, and even that was cut to eight weeks. One team, the Ohio Cannon, only made it seven weeks before folding. Still, the RFL did hold a championship game on June 13 in Mobile. In that game (very optimistically called the RFL Bowl I), the Admirals defeated the Outlaws 14-12 and were declared the league champions. Mississippi Pride quarterback Stewart Patridge was named as the All-RFL quarterback. 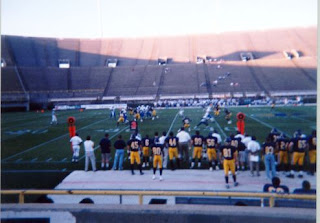 From the outset, the Mississippi Pride and the league as a whole suffered from abysmal attendance, as indicated by the almost vacant stands in the photo (although the Mobile Admirals regularly drew decent crowds). Only one game was ever televised: on May 8, 1999, the Mobile Admirals and the New Orleans Thunder game was shown on WHNO, a mostly religious local television station. In Jackson, a few hundred fans (including yours truly) faithfully attended the Pride games and saw some pretty darned good football in the process (although the punting seemed to be an insurmountable challenge for the Pride). It was a bit disconcerting one night, however, when the stadium lights went out in the middle of the game because the team owners had not paid the rent for the stadium. After some frantic negotiations with the stadium management, the lights came back on...eventually. Unfortunately, the lights never came back on for the Regional Football League. Faced with competition from the new XFL, backed by wrestling tycoon Vince McMahon, the Regional Football League passed into history with a whimper.

And all I have to show for it is a lousy t-shirt...