Helen Johnstone and the Chapel of the Cross 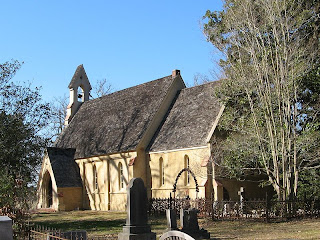 The Chapel of the Cross, located in Madison County near Annandale, was built between 1850 and 1852. The style of the Gothic Revival church was based on a design by architect Frank Wills, a native of Exeter, England, who came to New York in the 1840s and became particularly associated with ecclesiastical buildings. Wills was the official architect of an organization called the New York Ecclesiological Society, a group dedicated to the Oxford Movement, a movement within the Protestant Episcopal Church emphasizing high church, Anglo-Catholic worship. The plans for the Chapel of the Cross likely came from Wills’ designs, and are similar in form (although adapted) to his Sketch of a First-pointed Church, published in 1849 (below). The architect which supervised the construction the Chapel of the Cross, which was at the time, of course, located far from any populated area, is believed to have been Jacob Larmour, a New Yorker, living in Canton at the time. 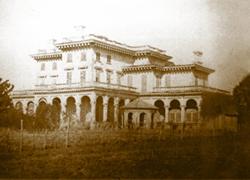 The church was completed in 1852 and consecrated the same year by Bishop William Mercer Green. The little Gothic church was actually built for the Johnstone family, who owned a nearby plantation, as a family church. Although Mr. Johnstone died before the church ever became a reality, his wife Margaret pressed ahead and built the chapel and then deeded the church and the grounds to the Episcopal Diocese of Mississippi in 1851. In the mid-1850s, Mrs. Johnstone also built a magnificent Italian Renaissance house called Annandale (above right). This house, from which the present residential community takes its name, was lost about 1920. The chapel itself fell into disuse and disrepair after the Civil War. In 1911, however, a granddaughter of Margaret Johnstone pressed the Diocese to reactivate the congregation and services were once again held in the church. In 1956, the church was restored and today is a thriving and growing congregation. Although the Chapel of the Cross is noted (and rightly so) for its architecture, the church, and especially the graveyard behind the church, is also associated with a classic ghost story. 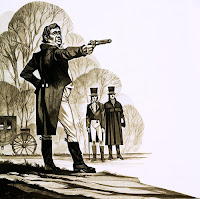 In 1855, so the story goes, a young man named Henry Vick, a member of the Rev. Newitt Vick family (the founder of Vicksburg), was traveling near Annandale when his carriage broke down. Invited by the Johnstone family to dinner that evening (it was during the Christmas season), the handsome young man promptly fell in love with sixteen-year-old Helen Johnstone, Mrs. Johnstone’s daughter. Over the next couple of years, the romance blossomed and in 1857 Helen and Henry were engaged to be married. Because of her youth and because Mrs. Johnstone did not wish to lose her daughter so soon, she convinced the couple to wait until Helen was twenty to be married. To that end, May 21, 1859 – Helen’s twentieth birthday – was selected as the wedding day. As with most good ghost stories, however, fate intervened and tragedy struck. Just four days before the planned nuptials, Henry was killed in a duel in Mobile. The duel was the result of an argument which began in a pub in New Orleans; after the duel was moved to Mobile, the two antagonists squared off. Vick missed (deliberately, so the story goes) but his opponent’s aim was true and Vick fell dead with a shot to the head. Henry’s friends took his body back to New Orleans and then to Vicksburg and finally to Annandale, where Helen was preparing for her wedding day. Grief stricken, she was inconsolable. On the day of her wedding, she led a procession to the graveyard at the chapel to bury her beloved Henry in the family plot (right), wearing her wedding dress to the funeral. Henry Vick was all of twenty-five years old. 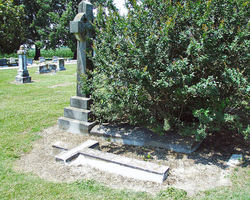 Time, we are told, heals all wounds. In Helen’s case, she at least, in time, found a new husband. In 1862, Helen Johnstone married George Harris, an Episcopal priest who would later serve as rector of the Chapel of the Cross. Harris was a Confederate chaplain during the Civil War. After the war ended, he and Helen moved to various places in Mississippi and raised a family of three children. In 1896, they built a house near Rolling Fork, Mississippi, located on top of an Indian Mound. The house, which still exists (and will no doubt be the subject of another blog post) is known as “Mont Helena.” Rev. Harris died in 1911. Helen remained in the house until her death six years later in 1917. Both are buried in the Mound Cemetery in Rolling Fork (above). For Helen, however, time did not, apparently, heal all wounds. If you believe in such things, Helen never recovered from the untimely death of Henry and still visits her long lost love in Madison County on a regular basis. According to the oft-told tale, a young woman in her early twenties has been seen sitting near Henry’s grave weeping inconsolably, and many believe the apparition to be none other than Helen Johnstone, the “Bride of Annandale.”

Other ghostly occurrences have also been reported at the Chapel of the Cross, including an organ which is heard playing late at night, occasional blood stains on the chapel’s floor, and ghosts who are seen wandering in and out the graveyard, which is locked at night. But the most famous is Helen. One has to wonder what the good Rev. Harris might have to say about this situation, though – surely he would not be in favor of his wife visiting her former fiancé on such a regular and extended basis!


If you wish to visit the Chapel of the Cross, please do so. It is a marvelous church in a beautiful setting. If you’re looking for a ghost, though, you might be disappointed. Then again…it is Halloween!