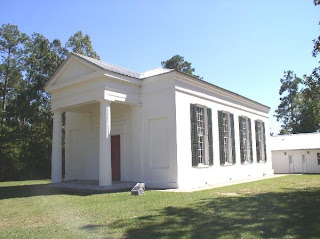 Located about fifteen miles southeast of Natchez, Kingston Methodist Church, built 1856, is one of the oldest and most historic churches in Mississippi. In 1800, Tobias Gibson, the “father of Mississippi Methodism,” organized a congregation in an area then known as the 'Jersey Settlement.' Among the original Jersey settlers was Rev. Samuel Swayze, a Congregationalist minister. Swayze organized a church about 1773, but built no church building. Instead, the members of his congregation met in homes, reportedly to avoid the Spanish in Natchez, who frowned on the establishment of Protestantism in the old southwest.  Three years after Tobias Gibson organized the Methodists at Kingston, Lorenzo “Crazy” Dow (below) sold his watch to purchase a piece of property for a church building. On this lot was built a log church and this was used for the next twenty years or so for worship services. [For more on Lorenzo Dow, see http://andspeakingofwhich.blogspot.com/2012/04/crazy-dow.html] 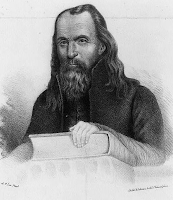 In 1822, Daniel Farrar, the son-in-law of the man who laid out the town of Kingston (Caleb King), donated another plot of land for a second church building. In 1840, a tornado struck the Kingston community and damaged the church, but the members continued to use it until 1856. At that time, Alexander King Farrar, who was “desirous of having a new church erected in the Jersey settlement at or near Kingston for purposes of religious or moral culture,” donated an eight-acre piece of property on which the present church is situated. In the deed, Farrar, who was an Episcopalian and a member of the Mississippi Secession Convention in 1861, specified that the church could be used by any denomination but that preference should be given to the Methodist Episcopal Church. The small brick Greek Revival church was dedicated on May 3, 1857, amid great fanfare. 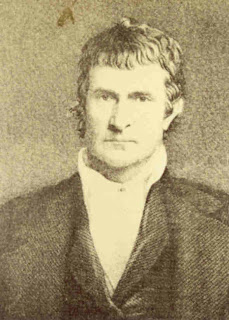 Invited to preach the sermon at the church’s dedication was the Rev. William Winans. Born in 1788 in Pennsylvania, Winans became a Methodist minister in Ohio and first served churches in Kentucky and Indiana. In 1810, he came to Mississippi and remained in the state until his death. An influential Methodist, Winans (right) promoted the American Colonization Society. In other words, Winans supported a gradual emancipation and repatriation to Africa as a solution for the slavery problem in the South. Politically, he was a Whig, and ran unsuccessfully for Congress against Democrat Albert Gallatin Brown in 1849. In the politics of the church, Winans was a moderating voice in a period of schism. In the 1830s, the Methodist Episcopal Church split over the issue of slavery. Despite his best effort to craft some sort of compromise, Winans finally threw his support behind the Southern church and was part of the committee that drew up the Plan of Separation establishing the Methodist Episcopal Church, South. In 1846, Winans called the first General Conference of that body into session. 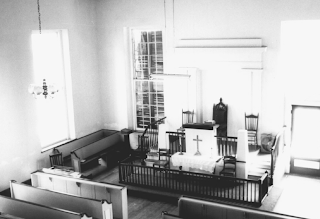 On the day of the dedication at Kingston, the weather was cold and rainy. The 69-year-old Winans came from Natchez in a carriage with Alexander Farrar. His sermon that day was based on 1 Kings 9:3-9 (which mentions the consecration of a temple). While he was pleased with his sermon and the reception he received, Winans was dismayed by the presence of an organ and a choir, both of which had been brought from Natchez for the occasion. According to Winans, both confounded “all distinction of words” in the hymns. Winans had previously served the Kingston Church, but it was when the church was a log meeting house, and he was generally unimpressed with what he considered “high church," including the use of musical instruments in church. Winans was also dismayed that no blacks were allowed in the service. By resolution, the congregation excluded slaves from services at Kingston, a practice becoming more common in a time of increased tension but still counter to Methodist tradition. Both incidences were signs that the church Winans, Gibson and Dow had established in the frontier was changing. The venerable old preacher wouldn't have long to fret over the changes, however, as Kingston was the last public appearance for William Winans. Within less than four months, he would be dead.

The church William Winans helped dedicate is still in use today. In the 1950s, electricity was added, but it took forty more years before air conditioning arrived (no doubt another addition Winans would not have approved of). As a “highly significant example of Greek Revival architecture,” the church, which still includes a slave gallery, was listed in the National Register of Historic Places in 1982.