MSU vs. Alabama: When Bully Beat the Bear 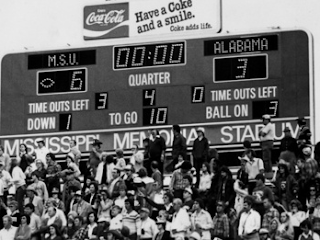 Tomorrow’s football game between Mississippi State and Alabama has generated a lot of anticipation, and well it should. Both teams are undefeated heading into the contest. Mississippi State, at 7-0 for the first time since Moses crossed the Red Sea. For Alabama, also at 7-0, this is somewhat familiar territory. Again ranked as the top team in the nation, expectations are that the Tide will find a way to turn back the Bulldogs in their quest for immortality.  If this scenario sounds somewhat familiar, it is. Way back in 1980, Alabama was also 7-0 and ranked number one in the nation.  On November 1st (All Saints Day), Alabama rolled into Jackson expecting to continue their march to a national championship behind a powerful wishbone offense led by Bama quarterback Don Jacobs that had generated up to 300 yards per game thus far. Alabama had won twenty-eight straight games, and had earned two conference championships and two national championships in the process. Bear Bryant’s boys had been ranked as the top team in the nation all season long. 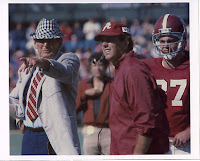 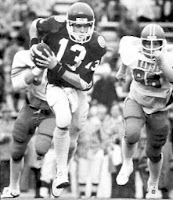 Mississippi State came into the game with a 6-2 record. Opening with three wins over Memphis State, Louisiana Tech and Vanderbilt, State was upset by the Florida Gators on September 27. Beating Illinois the next week, the Dogs suffered a humiliating 42-14 loss to USM the week after and then won two straight over Miami and Auburn. Coach Emory Bellard’s team, led by freshman quarterback John Bond (left), a native of Starkville, came into the Bama game ranked #13. Although both teams were good, few expected the upstart Bulldogs to win that day. After all, it was Alabama, which had beaten Mississippi State twenty-two times in a row, and it was Bear Bryant. At this point, the story becomes personal for me. 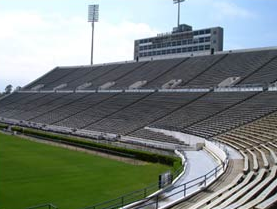 The sports editor for the Natchez Democrat at the time was a cousin of mine. With most folks in Natchez more interested in the Ole Miss-LSU game that day (which the Tigers won 38-16, by the way), I was asked to cover the Mississippi State-Alabama game. I gladly (although nervously) accepted. Since I had covered football games in high school for my school newspaper, I at least had some rudimentary knowledge of the game. However, I was woefully unprepared for the task ahead. Back then, of course, there were no laptops and certainly no internet (as a freshman at Millsaps I took a course in BASIC, but that was all I or anyone else knew about computers at the time). Sportswriters either wrote their stories out by hand or pecked them out on a typewriter and then called in the story. Even Video Display Terminals (or VDTs), a device which revolutionized newsrooms, were still a couple of years out. When I arrived at the stadium, I used my press pass *(above, right) to go up to the press box and took my place among the real sportswriters. I was in awe, in high cotton, and way out of my league. The game, to be honest, is a blur now. What I remember most is that someone brought food around at some point, and that folks kept handing us mimeograph sheets with up-to-date stats throughout the game. While I did my best to write a story that would pass for a newspaper article, let’s just say that I flubbed it completely, and in the end the Natchez Democrat had to reconstruct the biggest game in the nation that day from wire reports. In the long run, it was the greatest gift I could have gotten, because it cured me once and for all from ever wanting to be a sportswriter. To this day, I have nothing but admiration for all those who cover sporting events. The tools might have changed, but the pressure is still there to get the story right and on time, and it’s often a thankless job. 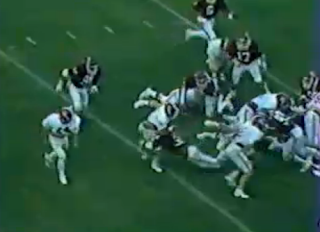 Mississippi State won that day, of course, 6-3. Alabama’s offense was held to only 116 yards on the ground and 64 passing yards. Neither team was able to score a touchdown, although in the final drive it sure looked as if the Crimson Tide would punch it in and preserve their championship season. With the ball on the MSU four yard line and less than thirty seconds on the clock, big Tyrone Keys (a fellow graduate of Callaway High School) hit the Bama quarterback and jarred the ball loose. When State’s Billy Jackson recovered the fumble, Alabama lost any hope of winning, and the Bulldogs’ biggest win in history was in the record books. For a seventeen year old freshman in the SEC skybox, that should have been enough to impress, but what happened next is actually what has stuck with me all these years. 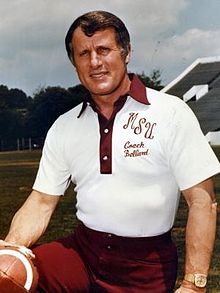 Along with the rest of the sportswriters, I went down to the dressing room for the post-game press conference with the winning coach. There was Emory Bellard (right), sitting on a small table puffing his ubiquitous pipe and mumbling something about the game. Frankly, I don’t recall what he said, but I have a feeling it was in fluent “coachspeak.” As we moved into the Mississippi State dressing room, in walks none other than Coach Paul “Bear” Bryant, who addressed the Mississippi State players. You could have heard a pin drop.  He said, as I recall, something like this: “Boys, ya’ll played a great game out there today, and I’m proud of you.” I doubt that’s exactly what he said, but that’s the way I remember it, and it’s a moment I will never forget.

With the win, Alabama dropped in the polls and would not be at the top of the national rankings again until 2008. Incredibly, it was the first time that MSU had beaten Alabama since 1957. The Tide went on to beat LSU and Auburn, but dropped another game to Notre Dame at Legion Field 7-0, while Mississippi State crushed LSU the next week and then narrowly defeated my beloved Ole Miss Rebels on a cold, wet, nasty Egg Bowl in Jackson before 62,500 fans. Both teams went to a bowl game. Alabama went to the Cotton Bowl, where they defeated Baylor. MSU was invited to the Sun Bowl, but State was bested by Nebraska 31-17 to close out what had been a banner year.

Tomorrow night, Mississippi State heads to Tuscaloosa to play the top-ranked Alabama Crimson Tide. Can it happen again? Does history repeat itself? We will all know the answer soon enough. If Mississippi State wins, though, I have a strong suspicion that Nick Saban will not be visiting the visitor’s dressing room for a congratulatory speech.