Mississippi's Women of the Confederacy Monument 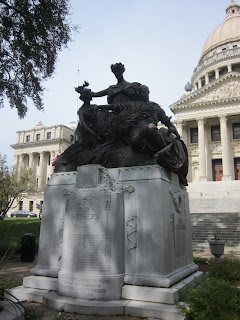 Located on the south side of the Mississippi State Capitol in Jackson is a monument dedicated to the “Women of the Confederacy.”  Cast in 1917 at Tiffany Studios in New York, the monument features two female figures and one male figure, a wounded and dying soldier. To the left of the soldier, a sympathetic woman is presenting a palm of glory to the soldier, a symbol of triumph even in death. Above both the soldier and the woman stands “Fame.” She, in turn, is placing a wreath on the head of the woman in recognition of her contribution to the Confederate cause.  Below the bronze figures are four inscriptions facing each direction, and dedicated to “our” mothers, daughters, sisters and wives. On the southern face, which is the front of the monument, is a quote from Jefferson Davis which, among other virtues, praises the women “whose pious ministrations to our wounded soldiers soothed the last hours of those who died far from the objects of their tenderest love.”

In 1907, the United Confederate Veterans decided that each of the former Confederate states should erect a monument honoring the women of the Confederacy. Sympathetic to the effort, the Mississippi Legislature passed legislation establishing a commission to select an appropriate moment for the State Capitol grounds. The year was 1910. Two years later, on June 3, 1912, the cornerstone for the monument was laid by the Grand Lodge of Mississippi. The date was significant and symbolic, as June 3 was the anniversary of Jefferson Davis’ birthday. The ceremonial festivities that day included a long list of speakers and a parade consisting of mounted police, the mayor of Jackson, Confederate veterans, the United Daughters of the Confederacy, various Masonic officials, and “many citizens in carriages and automobiles, with lavish decorations in Confederate colors.” Giving the primary address was the Reverend DeBerniere Waddell, an Episcopal minister. Waddell (above) was born in Hillsboro, North Carolina, but served as an officer in the Sixth Alabama Infantry and, later, the Fifteenth Alabama, where he fought with the regiment in the great battles in the eastern theatre, including Gettysburg, the Wilderness and Spotsylvania. At Gettysburg, Waddell’s regiment was engaged on the slopes of Little Round Top against the 20th Maine, the portion of the battle later made famous by the book The Killer Angels and the film “Gettysburg.” After the Civil War ended, Waddell was ordained in the Protestant Episcopal Church in 1869 and served as rector of several churches in Alabama, including Auburn and Sheffield. In 1891, Rev. Waddell was called to the Church of the Mediator, in Meridian, Mississippi, where “he labored with all of zeal and earnestness, infusing vitality into the spiritual and temporal affairs of the parish and gaining the affectionate regard of his people.” He later served at All Saints Episcopal Church in Tupelo. A staunch Democrat, Waddell was an active Mason and was grand commander of the Knights Templar in Mississippi. He was also actively engaged in the United Confederate Veterans organization. After a lengthy address, Rev. Waddell closed, in part, with this:

No greater day has ever dawned in Mississippi than this day, June 3, 1912, when the men of our great State with one accord assemble to pay homage to the women of the Confederacy. And no more appropriate date could have been selected than this anniversary of the natal day of Jefferson Davis, the central figure of the Confederacy, the incarnation of the principles for which the South stood, and the vicarious sufferer for the South when at Fortress Monroe he suffered all the humiliation and degradation that could be heaped upon him; but he was ever sustained and soothed by an unfaltering trust and rose supreme above the hatred of his enemies. In those celestial regions yonder, if it is given to the spirit eye to gaze upon earthly scenes, we know that grand galaxy of Confederate heroes, Jefferson Davis, Robert E. Lee, Stonewall Jackson, Albert Sidney Johnston, Nathan Bedford Forrest, and our own Stephen D. Lee, and a host of others, is looking down on us now with blessings and approval. 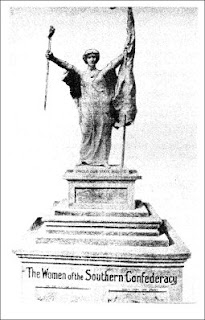 Although the cornerstone was laid in 1912, it would be five years before the remainder of the monument was installed. The reason for the delay was at least in part due to disagreement among the various Confederate veterans’ organizations about what type of monument was appropriate to honor the women of the Confederacy. There was no question that recognition of the women was appropriate; after all, the UDC had erected numerous monuments to the men who served as soldiers and sailors during the war. What the veterans couldn’t agree on was what the monuments should look like. After considering dozens of proposals for a common design to be erected at each state capitol, a committee of veterans selected a proposal by Louis Amateis, an Italian sculptor. When the design, which featured a female figure striking a militant pose and holding a sword and flag, was presented at a Confederate veterans’ reunion in Memphis in 1909, the complaints were loud and numerous. The figure (above), the critics argued, didn’t reflect the grace and sentimental nature of Southern women and was too war-like. With this in mind, the committee went back to the well and selected another sculptor. This time, they chose a woman named Belle Kinney, a native of Nashville, Tennessee. 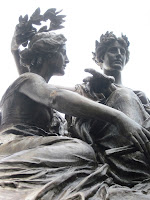 Belle Marshall Kinney, born in 1890, was just seven years old when she won her first prize for sculpture at the Tennessee Centennial Exposition. In 1905 (at age 15), she earned a scholarship to attend the Art Institute of Chicago. She later served as an instructor at the Institute. Kinney received her first commission in 1907. When awarded the job of creating the “new” Women of the Confederacy Monument, she was still just twenty-three years old. Although the goal of the UCV was to select a design that could be used throughout the South, the model produced by Kinney (left) also failed to satisfy all of the critics. Unfortunately, her design – the sculpture ultimately selected by the State of Mississippi – was only placed in two locations: Jackson and in her hometown of Nashville, Tennessee. By the time the committee finally selected Kinney’s design, other Southern states had grown tired of waiting and decided to go their own way. When the Jackson monument was finally installed during the state's centennial year in 1917 at a cost of $20,000, Mississippi was among the last three states to erect a monument to their Confederate women. Sadly, the Tennessee monument has been incorporated into a larger memorial plaza and has somewhat lost its original context and meaning.

In 1921, Kinney married Leopold Scholz, a sculptor from Austria, and they collaborated on a number of significant works, including many of the statues at the Parthenon at Nashville’s Centennial Park. Kinney and Scholz also designed the Victory statue in the Bronx. Dedicated in 1933, the memorial commemorates the 947 soldiers from the Bronx who lost their lives during World War I. Kinney died in New York in 1959, but her work lives on in front of the Mississippi State Capitol.