"One of the bravest men that ever led a charge:" Col. William P. Rogers and the Battle of Corinth 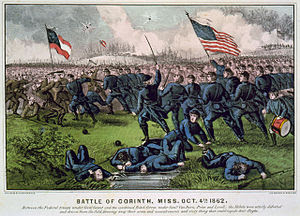 At about 4:30 a.m. on October 4, 1862, Earl Van Dorn's Confederate army, which had overrun the outer defenses of Union Major General William S. Rosecrans' (below right) garrison at Corinth the day before, opened the fighting for a second day. Planning a grand assault against Rosecrans' interior defenses, Van Dorn hoped to seize the vital railroad crossroads of the Mobile & Ohio and Memphis & Charleston Railroads. As part of the assault force, John C. Moore's brigade in Maury's Division waited for the hour to attack. The task which faced the brigade, which included the 2nd Texas Infantry, was to seize an earthen fort named Battery Robinett. Named for Lt. Henry Robinett, one of the Union soldiers defending the fort, Battery Robinett had six-foot high walls and a six-foot deep ditch in front. In the open ground in front of the fort, the Federals had placed felled trees as obstacles (called abatis) to slow the expected attack. Inside the fort, Robinett and the men of Co. C, 1st U.S. Infantry were manning three artillery pieces, and the fort was supported by other batteries and by Union infantry in close proximity. The task assigned Moore's Brigade, commanded this day by Col. William Rogers, was grim.

Rogers' command included his own 2nd Texas, the 6th and 9th Texas Dismounted Cavalry, one company of the 43rd Alabama and part of the 35th Mississippi Infantry. As directed by Van Dorn, the Confederate attack along the whole line was scheduled for 10:00 a.m. With the fort looming in his front, Col. Rogers, who was forty-four years old at the time of the battle, put on an armored vest and pinned a note to his clothes with his name, rank and other identifying information. When the hour came to attack, however, only Maury's division, of which Rogers' brigade was a part, made the assault. Rogers mounted his horse and led his men forward. Immediately, Union artillery fire ripped through the Confederate ranks. 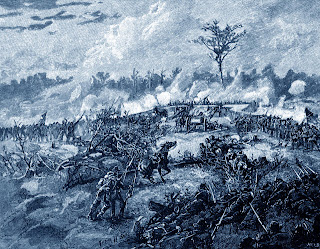 Struggling through the abatis in front of Battery Robinett, the Confederate line finally emerged into the open ground in front. With a clear shot at the Confederates, the Union defenders switched from shells to canister, tearing great holes in the brigade's line. When Union infantry added their fire, it was too much and the Confederate line wavered and fell back, leaving behind what one Union soldier described as "a mass of struggling bodies." Reforming, the brigade attacked again and was once more driven back. Finally, after several tries, Col. Rogers, who was still mounted on his horse, urged the Confederates to make one last attempt to take the fort. According to one Federal soldier, they "rushed like demons at the fort, crossing the ditch and scaling the walls as if by superhuman dexterity." The walls of the fort proved too high, however, and dozens of men took shelter in the ditch to escape the horrendous fire.

Stymied in their attempt to climb into the fort, and still under intense fire from Union infantry on their flanks, the men of Rogers' command began entering through the gun ports (or embrasures). At this point, the fight turned into a desperate hand-to-hand struggle between Rogers' men and the men from the 1st U.S. Infantry (who had been serving the artillery pieces). Among the wounded in the fighting was Lt. Henry Robinett. Forcing the U.S. Regulars back, a small contingent of Confederates got inside the fort, briefly claiming the hard-fought prize. Behind them lay heaps of dead and dying comrades. 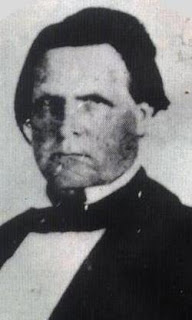 Just outside the fort, Col. Rogers, who was still mounted, urged his men to take advantage of the situation. The advantage was short-lived, however. Seeing the emergency of the moment, several Union regiments, including the 11th Missouri Infantry, converged on Battery Robinett and the brief Confederate victory melted away under the murderous fire. Outside the fort, one Federal soldier wrote that the Rebels' dead "lay three or four feet deep and the blood ran in streams down the trenches." Seeing little hope to stem the tide, Colonel Rogers, along with a small band of men who had gathered in the ditch outside the fort, urged the survivors to "save yourselves, or sell your lives as dear as possible." Reaching down to get a ramrod, Rogers tied a handkerchief to it as a rudimentary surrender flag, but apparently his effort went unnoticed or was ignored. A Federal volley took down most of the men around Rogers, including the colonel himself. Despite his body armor, Rogers was hit by at least eight bullets, and perhaps as many as eleven. His body fell to the earth inside the fort his men so desperately tried to capture. Other after-action reports indicated that he had been holding a Confederate flag aloft when he was shot down.

The battle of Corinth, fought 150 years ago today, was over for Col. Rogers and hundreds of other men who made the desperate charge against Battery Robinett. On other parts of the battlefield, Earl Van Dorn's Confederates had limited success, even briefly entering the town of Corinth itself near the railroad crossing and the Tishomingo Hotel. In the end, though, the Confederate effort to retake Corinth failed, and Van Dorn's broken army was forced to retreat. In the process, he had lost 4,233 men. 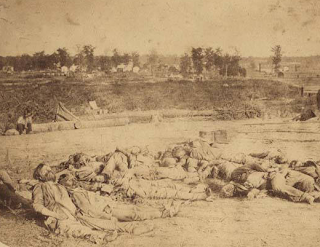 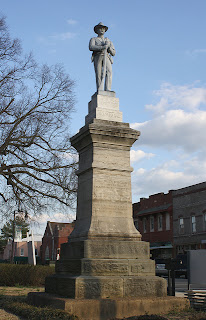 After the battle, the victorious Federal troops had thousands of dead men and horses to bury or otherwise dispose of. Most of the Confederate troops were buried in hastily dug pits. Colonel Rogers' body, however, was given special attention and buried with full military honors by General Rosecrans, who told his troops that Rogers was "one of the bravest men that ever led a charge." Today, his grave remains just outside the site of Battery Robinett, exactly where he fell. Before he was buried, his corpse, along with other dead Confederates, was photographed where they fell outside the ditch of the fort. Battlefield photographers were rare in the Civil War, and even more rare in the Western Theater. Corinth, however, had photographers with the army. As a result, we have more photographic documentation of the town during the Civil War than most others in the region. Photographs of the carnage of a battlefield was a gruesome but popular topic, first used after the battle of Antietam the month before. In the photograph here (above left), among the most famous of the war, Rogers' body is on the left with the beard. One can only imagine the horror of seeing this photograph by Rogers' widow and children.

Rogers' bravery would later be immortalized by the United Daughters of the Confederacy with the erection of a granite monument in 1912, and the United Confederate Veterans placed a statue in downtown Corinth in his memory. The monument (left) was later moved to the courthouse square, where it remains today.