William P. Rogers and the Road to Corinth

William Peleg Rogers was born on December 27, 1819, in Georgia, although he wasn’t from Georgia (it just happened that his parents were visiting the state – perhaps for Christmas - when he decided it was time to be born). Soon thereafter, the family moved from Alabama to a plantation near Aberdeen, Mississippi. When of age, William went to a medical college in Kentucky (as was his father’s desire) and upon graduation began practicing medicine in Pontotoc County. While working as a doctor, he also studied law and was admitted to the Mississippi bar in 1842. He was also a newspaper editor during this period (a Whig-leaning paper in Aberdeen). Despite all his professional activities, he somehow found time for romance and married Martha Halbert of Tuscaloosa, Alabama, in 1840. To the couple would be born six children – three girls and three boys – between 1842 and 1858. 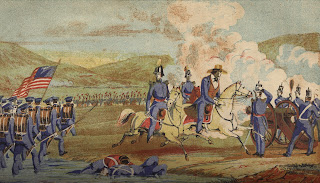 After the birth of his third child, Joshua Rogers, William, who was then 25 years old, went off to war in Mexico. In the summer of 1846, Rogers became captain of Co. K (Tombigbee Volunteers) of the First Mississippi Volunteer Infantry (also known as the Mississippi Rifles). He succeeded Alexander McClung as captain, a man known for his propensity for dueling and perhaps best known for committing suicide in the Eagle Hotel in Jackson in 1855. The First Mississippi was commanded by Jefferson Davis. Unfortunately, Rogers didn’t get along very well with Davis, accusing Davis of ill-treatment of his company during the fighting in Mexico. Though he felt mistreated, Rogers was by all accounts a brave soldier and a good officer, and was the first to scale the walls of the fort at Monterey and fought admirably at the battle of Buena Vista. He did not like army life, though. “I am more than tired of a soldier’s life,” he wrote in his diary, “I am disgusted with it.” With the end of the war, Rogers returned home. He had earned both a hero’s welcome and the personal animosity of Jefferson Davis in the process.

Back in Mississippi, Rogers decided to try his hand at politics and ran for Chancery Clerk. He lost. Next, he was turned down for an appointment as a federal marshall. One can only speculate that Rogers’ political misfortunes were a result of his wartime difficulties with Jefferson Davis. Then, he decided to run for the post of state auditor, but before throwing his hat in the ring, President Zachary Taylor, his old Mexican War friend, appointed him as United States Consul to Veracruz in 1849. That was fine for William, but Martha balked at taking her six children to Mexico and refused to go further than Texas. Rogers agreed to the temporary separation, and proceeded to Veracruz on his own. For two years, his post there was a routine assignment. Then, in 1851, there were accusations of embezzlement. Although not involving Rogers himself (and they were ultimately proved to be false anyway), the charges impugned his character and he resigned and returned to Texas. There, he had a successful law practice and became a professor of law at Baylor University. 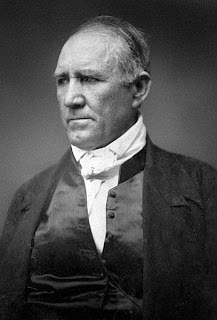 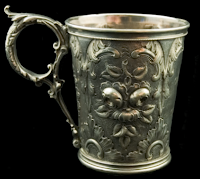 Rogers and his family moved to Houston in 1859, where he entangled himself in secessionist politics. Although he was a close friend of Sam Houston (and a distant cousin), Rogers increasingly feared the influence of the abolitionist movement. Houston (right), who favored keeping Texas in the Union, must have despaired at his friend’s conversion to the cause of secession. Not only were they friends and distantly related, Houston and his wife were godparents to one of Rogers’ children. This christening cup (lower right) was given by the Houstons to Margaret Houston Rogers in 1855. With Lincoln’s election, however, Rogers completely committed to the secessionist movement and was elected to the Texas secession convention and signed the ordinance of secession on February 1, 1861. In a short time, Rogers and others drove Houston out of the governor's over the issue. With the onset of the Civil War, Rogers first offered his services to the Confederate War Department. When that went nowhere, he was offered a colonelcy with the First Texas Infantry, which was headed for Virginia. His wife, however, intervened, not wishing him to go so far away from home. As such, he accepted a commission as Lieutenant Colonel of the 2nd Texas Infantry, a unit destined to serve in the western theater (and a whole lot closer to Texas). The 2nd Texas entered the war just as the battle of Shiloh erupted, and they lost more than a third of their men in that engagement. When the colonel (John Moore) was promoted to brigadier general after the battle, Rogers moved up to colonel. In August, 1862, a group of officers petitioned the War Department to promote Rogers to general. Despite the recommendation of numerous regimental commanders, the request went nowhere. Again, one must wonder if Jefferson Davis, his old Mexican War nemesis (and now the Confederate president) intervened to block the promotion. Regardless, Rogers remained colonel of the 2nd Texas. 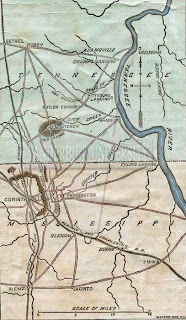 In the fall of 1862, Corinth, Mississippi, the vital railroad crossroads which had been captured by the Federals in May, was the target of Confederate plans to retake the town. Led by General Earl Van Dorn (right), a native of Port Gibson, Mississippi, the army by October 2 had maneuvered into position to attack the fortified Union town from the northwest. William S. Rosecrans, the Union commander of the Corinth garrison, had plenty of warning and was prepared for Van Dorn’s attack. The impatient and volatile Van Dorn (who would be dead in seven months after being killed by a jealous husband) probably should have declined to attack at all, considering the strength of Rosecrans’ position. Van Dorn, however, against the advice of his own subordinates, launched the attack around 10:00 a.m. on October 3. Surprisingly, the battle went well for the Confederates that day. The Federals were pushed back some two miles and driven out of the outer defense lines. Van Dorn, excited with the thought of victory, wired Richmond that “We have driven the enemy from every position. So far, all is glorious, our men have behaved nobly.” Certainly, the 2nd Texas, as part of John C. Moore’s brigade, performed nobly that day. After advancing against some of Rosecrans’ outer works, the Texans, along with the rest of the brigade, charged and captured a Union fort on the south side of the Memphis & Charleston Railroad. By nightfall, the brigade was drawn up in line of battle in sight of Corinth, where they spent the night anxiously awaiting the renewal of fighting. The attack the next day against Rosecrans’ heavily fortified interior lines would be the last day on earth for Col. William P. Rogers.