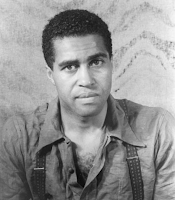 Robert Jones was born in Tate County, Mississippi, either in Senatobia or in Coldwater, and more than likely he was born in 1910. The son of Robert and Elnora Jones, young Robert left school at an early age to become a sharecropper. As a young man, he married Ruth Connolly, but the couple separated prior to 1931 and later divorced. During the Great Migration, a period when many African Americans left the South to seek a better life elsewhere, Jones left Mississippi and went to Chicago. There, he had a brief career as a prizefighter, fighting under the name "Battling Bill Stovall." During his boxing career, he was a sparring partner with the great Joe Louis.

From Chicago, Jones made his way to New York. There, he got a job with the Works Projects Administration, where he met Langston Hughes. Hughes was among the leaders of the Harlem Renaissance movement, and encouraged Jones to try his hand at acting. In 1938, Jones was cast in a play written by Hughes called "Don't You Want to Be Free?" Theater roles led to film. In 1939, he had a bit part in Lying Lips, featuring an all-black cast in which Jones played a detective. Lying Lips was directed by Oscar Micheaux, the first African American to produce a feature-length film (in 1920). For his part, Jones acted in several more low-budget pictures, generally crime dramas. In the 1950s, he was blacklisted by the House Un-American Activities Committee, probably because of his association with Langston Hughes. During this period he studied acting in New York. By the 1970s, he was back in business, however, and, in fact, would be cast in several major motion pictures.

In 1973, Robert Jones played his biggest role as Luther Coleman in The Sting. Starring Robert Redford and Paul Newman, The Sting won seven Academy Awards, including an Oscar for Best Picture. Other films in which Jones appeared include Witness, Trading Places, Sleepaway Camp, and The Cotton Club. In The Cotton Club (1984), directed by Francis Ford Coppola, the story revolves around a 1930s jazz club in Harlem, a time and place Jones had experienced in real life as a young man. Robert Jones continued to act into the 1990s, in film, stage and television. His last film role was in Rain Without Thunder in 1992. During his acting career, he never played a major role, but was honored with a lifetime achievement award by the U.S. National Black Theatre Festival toward the end of his life. 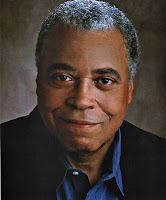 Robert Earl Jones died in 2006 in New Jersey. In addition to his marriage early in life, he was married a second time. Unfortunately, it too ended in divorce. Jones had two sons. His first son was born after he separated from his first wife. As a result, he did not get to know his son until the 1950s. Luckily, the two reconciled and even shared the stage together. Robert Earl Jones' son, James Earl Jones (left), has since gone on to be one of America's most recognized and celebrated actors.