The Capture of the USS Petrel


In the history of warfare, there are probably few instances of naval forces being captured by ground forces, especially cavalry. However, that is exactly what happened in Mississippi during the Civil War near Yazoo City. The result was the loss of a Union vessel and, most likely, a bit of an embarrassment to the U.S. Navy.

In April 1864, Union Colonel Hiram Scofield was ordered by Major General Stephen A. Hurlbut to occupy Yazoo City. The town had already been taken by Federal troops a month or so earlier, so the expedition would be a return trip. With three infantry units, a section of artillery, Osband’s mounted brigade (including the 3rd United States Colored Cavalry) and the 10th Missouri Cavalry, moved overland toward Yazoo City. Ordered to cooperate with Scofield’s ground troops were two Union gunboats, the Petrel and the Prairie Bird (above), both of which moved up the Yazoo River on April 18. Both vessels were “tinclads,” meaning they were gunboats converted from river steamers. Although they were generally known as “tinclads,” they were not covered in tin. Instead, they were generally protected by wooden “armor,” if at all. During this expedition, the Petrel was commanded by Acting Master Thomas McElroy. 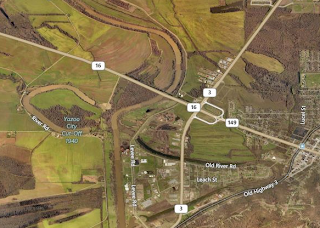 On April 21, the Petrel engaged with Confederate artillery batteries posted at Yazoo City. After the Petrel was damaged in the exchange of gunfire, McElroy decided to dock her on the west bank of the Yazoo near the mouth of the Tokeba Bayou to make repairs. (The site is now part of an old bend in the river seen here on the left of the aerial photo). The Prairie Bird, meanwhile, dropped back downriver out of range of the Confederate guns at Yazoo City. Thus, the Petrel was isolated above the town. After sending a landing party ashore, McElroy went below deck to eat his dinner, confident that all was in order. It was 2:00 p.m. After finishing his meal, McElroy returned to the deck. As he did so, Confederate troops hidden along the river bank opened fire on the Petrel. 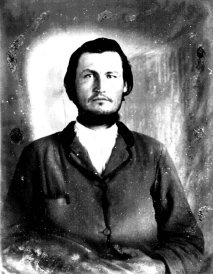 The Confederates who were suddenly peppering the Petrel with gunfire belonged to Col. John Griffith’s 11th and 17th Arkansas Consolidated Mounted Infantry. An Arkansan with ties to Mississippi, Col. John Griffith (right) had seen a lot of action in the region already, and was always good for a fight. Seeing the Petrel isolated above Yazoo City, the combative colonel asked General Wirt Adams for permission to try and capture the Petrel with his regiment. Adams was reluctant to approve the plan (since capturing gunboats with cavalry was a bit unusual) but granted Griffith’s request. Along with two artillery pieces (10-pounder Parrott rifles from Owens' Arkansas Battery), Col. Griffith positioned his men, including a number of sharpshooters, about 400 yards from the Petrel. Covered by the dense tree line along the banks, Col. Griffith’s fire took the crew of the Petrel by surprise. As cannon fire erupted, Kimble Ware, the Petrel’s pilot, made an attempt to turn her around and get out of range of the Confederate guns. Unfortunately, the Petrel ran aground approximately 200 yards from the river bank. As the crew scrambled to back the Petrel off the sand bar, two artillery shots plunged through the stern, one puncturing a steam pipe and the other cutting through the gun deck and exploding the boilers. Another slammed into the magazine, mortally wounding the Gunner’s Mate, Charles Seitz, who lost both legs in the explosion. To escape being scalded, most of the crew jumped into the river and swam to shore. Most escaped capture and eventually made it to the safety of the Prairie Bird.

Before the ship was abandoned, McElroy ordered the engineers to torch the boat. As hot coals were being placed along the rails, the Confederates boarded the vessel and extinguished the flames. First to reach the Petrel was Sergeant Joseph A. Garing of Wood's Mississippi Regiment, who had been operating as a scout for Griffith’s men. According to a postwar account, Garing “pulled off his shoes and hat, swam to where she [the Petrel] was, received the surrender, then swam back and the vessel was pulled to east bank.” Those left to surrender included McElroy, Kimble Ware (the pilot) and Quartermaster John Nibble. With the fire out, the victorious Confederates removed the Petrel’s eight 24-pounder howitzers, a significant prize. Initially sent to Canton, these guns were eventually forwarded to Mobile, Alabama. After salvaging other valuables from the boat, the Confederates burned the Petrel to the water line. The unlikely capture of a U.S. navy gunboat by Confederate cavalry was complete. 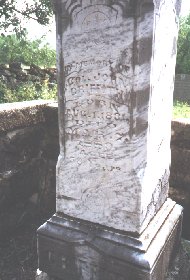 The three Union sailors captured by Griffith’s men went to prison, most likely to Libby Prison in Richmond. They were released in the fall of 1864, along with other naval personnel, in exchange for the release of an equal number of Confederates. Upon release from prison, many of the men lacked sufficient food and clothing and when back in Union hands were each provided with “blankets, shirts, drawers, stockings, shoes, wine, spirits, preserves, milk and every conceivable good thing.”  Of course, similar complaints of ill treatment came from Confederate soldiers who had languished in northern prisons. No doubt, both were equally true.

After the war, John Griffith, the Confederate colonel who engineered the capture of the Petrel, returned to Arkansas, where he continued to resist Federal authority during Reconstruction. Moving further west to Texas, Griffith settled in Taylor and Kimble counties and helped form the local governments there. On March 7, 1889, he was gunned down by brothers Joab and Mack Brown under mysterious circumstances. He is buried in Kimble County, Texas, next to his wife Catherine.