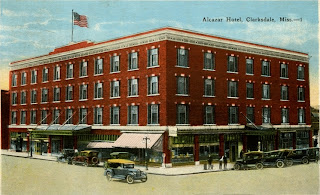 Located in Clarksdale, Mississippi, the Alcazar Hotel was built in 1914-1915. Once considered among the south's premier hotels, the Alcazar included a glass dome on the second floor which allowed natural light to filter through to the lobby on the first floor, where a restaurant and several other businesses were housed, including a radio station. WROX operated from the hotel for nearly forty years, featuring live performances from the likes of B.B King, Muddy Waters, Pinetop Perkins, Ike Turner and from an “obscure Mississippi country boy” who showed up one night named Elvis Presley. The disc jockey at WROX was Early Wright. Joining the station just after World War II, Wright (who died in 1997) was honored in later years as Mississippi’s first black disc jockey. 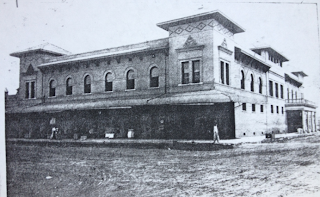 The Alcazar was not the first hotel by that name in Clarksdale. The original Alcazar Hotel (left) was built in the mid-1890s in the Spanish Revival style. The brown-brick building was a prominent Clarksdale landmark in its day. The name “Alcazar” (which was a type of Moorish fort or palace) was apparently a popular one for hotels of the period. The Alcazar Hotel in St. Augustine, Florida, for example, included a steam room, gymnasium, sulfur baths and the world’s largest indoor swimming pool. While Clarksdale’s Alcazar had no swimming pool (in fact, private baths weren’t added until a renovation in 1938), it was the pride of the King and Anderson corporation. J.W. King and J.A. Anderson owned a huge plantation (in excess of 17,000 acres) west of Clarksdale. With lots of money coming in from cotton and other crops, King and Anderson started investing in various real estate ventures, of which the Alcazar was one. (Note: King and Anderson will be the subject of a future blog). On Sunday, March 16, 1947, black smoke started billowing up from the old hotel. Despite the best efforts of the Clarksdale fire department, the flames spread quickly, fanned by a brisk wind. By nightfall, the original hotel (then used as an annex to the newer Alcazar Hotel) was in ruins. Several days later, a hotel employee named Caesar Stokes was arrested for arson. According to his confession, Stokes was angry after being reprimanded for coming to work drunk and set the fire in a wastepaper basket. He was sentenced to eight years in the penitentiary for his crime. 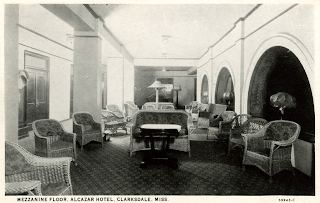 The “new” Alcazar Hotel, advertised as the “most modern hotel in Mississippi,” was designed by architect Charles Oscar Pfeil of Memphis. Pfeil (right) was born in 1871 on a farm in Illinois, and was one of eleven children. After receiving his primary education, Charles enrolled in the agricultural program at Kansas State. In 1891, however, he decided to pursue a degree in architecture at the University of Illinois. Graduating in 1893, he worked at several architectural firms in Peoria, Chicago and St. Louis before moving to Memphis about 1903. There, he opened a firm with George M. Shaw. Together, they were responsible for several prominent structures in Memphis, including the Chamber of Commerce Building, built in 1919 (and said to be inspired by the designs of Louis Sullivan) and the Tennessee Trust Company building (now the Union & Planters Bank building).  Besides the Alcazar in Clarksdale, Pfeil's work includes the old Presbyterian Church, the former City Hall, the Methodist Church, the Levee Board building (with George Shaw) and the Carnegie Library. Most of this was done while Pfeil was on his own but in 1927 he formed a partnership with architect George Awsumb. Awsumb was born in Norway but raised in Wisconsin. Like Pfeil, he was a graduate of the University of Illinois School of Architecture. Awsumb moved to Memphis from Chicago after he and Pfeil won a design competition. The resulting partnership, Pfeil & Awsumb, would have had a nice "happy" ring to it if only “Pfeil” were pronounced “feel.” Alas, Pfeil’s name in German is pronounced “fell" (darn it). 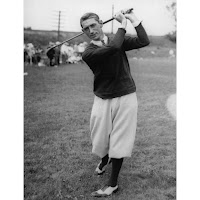 While a prominent architect in both Memphis and Clarksdale and an avid sportsman (he was a member of the Mud Lake duck shooting club in Arkansas), Pfeil had yet another interest which led him to national prominence: golf. A member of the Memphis Country Club, Pfeil not only played golf but promoted it as a game for the masses. Pfeil was president of the Western Golf Association in 1921-22 and then in 1923 was named to the executive committee of the United States Golf Association (USGA), where he was noted for his interest in the science of greens keeping (no doubt going back to his days in the agriculture program at Kansas State). He was most interested, however, in making sure that despite the sport's growing popularity, the governing bodies of golf hold fast to the rules of game, so that new recruits to the sport would not “treat with indifference the rules and etiquette of the game.” In 1926, he was elected first vice-president of the USGA and was slated to rise to the presidency, a feather in the cap, no doubt, for the Memphis Country Club and the south in general. However, Pfeil very inconveniently died in December 1927, just “in sight of the promised land” of the golf world. Had Pfeil lived and ascended to the USGA presidency, it is interesting to ponder the effect he might have had golf in the region. As a side note, the same year that Pfeil died, golfer Tommy Armour, known as "the Silver Scot," won the U.S. Open at Oakmont Country Club in Pennsylvania despite being wounded during World War I. During his service in the British tank corps, Armour (above) lost his sight in a mustard gas attack and had to have a metal plate inserted in his head and left arm. With sight restored in just one eye, Armour went on to win 27 tournaments in his professional career, including the 1930 PGA Championship. 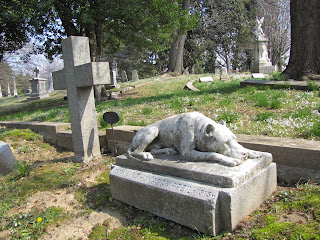 Charles Oscar Pfeil's remains were interred at Forest Hill Midtown Cemetery in Memphis, the same cemetery where Elvis Presley was originally buried. Pfeil’s wife, Myra Hancock Pfeil, died in 1915, just six years after their marriage in 1909. Buried at Cave Hill Cemetery in Louisville, Kentucky (where rests "Colonel" Harland Sanders of Kentucky Fried Chicken fame), her gravestone is an interesting one, featuring a beautifully carved dog (right). Before meeting Pfeil, Myra Hancock was married to William Sherman Fitch, the grandson of Union General William Tecumseh Sherman. Incredibly, Almira “Myra” Hancock was also the grandchild of a Union general of some note: she was the granddaughter of Winfield Scott Hancock. Their marriage was the cause of a great deal of interest nationwide, as it was the union of two famous generals’ grandchildren. The marriage didn’t last, however, and both later remarried (Fitch and his second wife are buried in Biloxi, Mississippi). Back in Clarksdale, Charles Pfeil decided to remember his late wife with a much larger monument: a hospital. After forming a corporation with Clarksdale attorney John Wesley Cutrer and a member of the Anderson family in 1916, Pfeil announced that he would design and build a new hospital to be called the “Myra Hancock Pfeil Memorial Hospital.” For whatever reason, though, it was never built, at least not by Pfeil. A hospital was built in Clarksdale in 1923, but Pfeil was not the architect and it was named the "Clarksdale Hospital." Why Pfeil's plan never went forward is unclear. Maybe it was a financial decision or some other business reason. Maybe he found another job which demanded his time and talent elsewhere. Perhaps, though - just perhaps- he was too busy playing golf.