Aaron Forrest and the Yazoo Pass 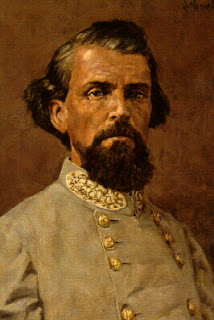 Born in Bedford County, Tennessee, on July 13, 1821, Nathan Bedford Forrest was the first of twelve children. With little formal education, Bedford Forrest moved with his family to Mississippi in 1834, and after his father’s death in 1837, was left with the responsibility of supporting the entire family.  Despite his lack of a formal education, Forrest excelled in business (including the slave trade) and by the time of the Civil War was a very wealthy man. Of course, Forrest (right) is best known as a military genius. Rising from private to Lieutenant General, he is rightfully considered one of the greatest generals the war produced. Nathan Bedford Forrest was not the only Forrest who fought in the Civil War, however. In fact, four of Nathan Bedford’s brothers also served in the Confederate army, all of them achieving an officer’s rank. Two of them, Jeffrey and Jesse, were colonels, while William and Aaron served as captains. All have interesting stories, but it is Aaron who is the subject of today’s discussion. Of all the Forrest brothers in the war, Aaron suffered perhaps the most embarrassing defeat imaginable.

Aaron Forrest (1828-1864) was seven years younger than his brother Nathan. In Memphis, Aaron was a partner with his older brother at “Forrest & Maples” as a dealer in slaves. By 1858, Aaron had his own slave business in Vicksburg. By 1860, the A.H. Forrest and Company ceased operations and Aaron joined the war effort as a soldier in the Sixth Battalion, Mississippi State Troops. With the rank of captain, Forrest commanded a cavalry company. Operating mostly as scouts, Forrest’s company was in the Mississippi Delta in the spring of 1863. It was during the Yazoo Pass Expedition that Forrest had his brief brush with infamy. 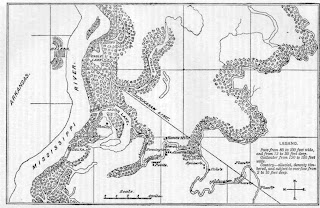 The Yazoo Pass Expedition was a joint operation between the Union army and navy to bypass Vicksburg’s defenses by utilizing the rivers of the Delta region to move down toward Vicksburg. On February 3, 1863, the Federals blew the levee along the Mississippi River at Moon Lake and flooded the area. Entering Moon Lake through the breached levee, the Union gunboats and transports began making their way toward their objective, which was to get into the Coldwater and Yazoo rivers. To do that, however, the fleet had to navigate a series of tortuous and twisting waterways. Their task was hampered by natural obstacles and trees felled by Confederate partisans across the channel. The result was an extremely slow and difficult advance. All along the way, men under the command of Capt. Aaron Forrest, one of the few Confederate units in the region, took shots at the soldiers on board the vessels, cut down trees ahead of the fleet, and watched and reported on the progress (or lack thereof) of the Federal expedition. 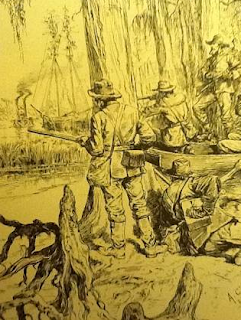 Toward the beginning of the movement into the Yazoo Pass, Captain George W. Brown, acting master of the Forest Rose, and Lt. Col. James H. Wilson, Grant’s chief topographical engineer, decided to take a skiff (i.e., a small boat) into the Pass ahead of the fleet to reconnoiter what lay ahead (Wilson's map of the Yazoo Pass is above). Watching from the riverbank was Capt. Forrest’s company, ready to fire on the little party (which included an armed guard). Seeing Wilson’s uniform, however, and perhaps confusing Capt. Brown’s pilot’s insignia for a Union general, Forrest decided to let the small vessel pass by in hopes of bagging the whole party further upstream. The thought of capturing two or more brigadier generals was perhaps just too good to pass up. Just as they were about to spring the trap, however, Forrest’s men heard the unmistakable sound of movement in the woods toward the Confederate position. Thinking he had been outflanked by a Union landing party, Forrest’s men fell back. In the meantime, Wilson and Brown escaped the trap laid for them, rejoining the fleet in Moon Lake. Unaware of the danger facing them, Brown and Wilson would have no doubt been captured by the young Captain Forrest. They were not saved by Union troops, however. In fact, the noisy group turned out to be a pack of wild pigs running through the woods!! 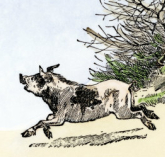 To be fair, Capt. Forrest never filed a report about his encounter with the pigs (and who could blame him) and the only account we have of this incident comes from Capt. Brown, written many years after the war, and recorded as a footnote in Ed Bearss' Vicksburg Campaign trilogy.* If true, though, it’s probably the only time in the war that a Forrest was defeated by a pig. 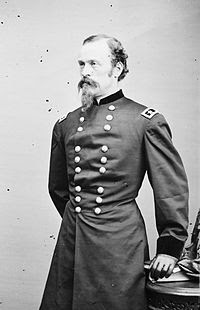 Aaron Forrest did not survive the Civil War to contest the story, falling victim to pneumonia in 1864. His brother Jeffrey, who rose to command a cavalry brigade under big brother Nathan, was killed at Okolona the same year. One of the men in the skiff, however, not only survived the war but went on to high command. James H. Wilson, one of Grant's most trusted lieutenants, would eventually be promoted to major general, commanding cavalry in both the eastern and western theaters. In 1865, Wilson (right) led a crushing raid through Alabama and Georgia, during which his troops burned the University of Alabama, defeated Nathan Bedford Forrest at Selma, captured Columbus, Georgia, and, in May, 1865, captured none other than President Jefferson Davis.

The near capture of James Wilson, then, becomes one of many 'what ifs' of the Civil War. If captured by Aaron Forrest, Wilson, rather than rising through the ranks to high command and leading some of the final campaigns of the war, might have simply disappeared. But for the timely arrival of a pack of porcine pretenders, James H. Wilson himself might have been nothing other than a footnote in history.


* The account was related to Brown by Cadwallader C. Washburn, who probably got the story from captured Confederate soldiers. In December, Washburn had commanded the failed Union expedition to Grenada, ending with the Battle of Oakland. See http://andspeakingofwhich.blogspot.com/2012/06/battle-of-oakland.html.