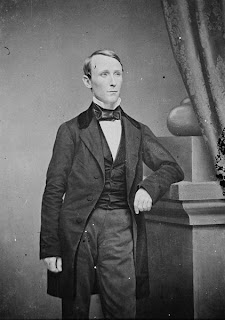 William Walker had a dream, a dream shared by many pro-slavery advocates in the ante-bellum South. Walker’s dream involved the expansion of slavery into Latin America. Known as “filibustering,” the idea was not a new one, but the young and energetic Walker actually worked to implement it.

William Walker (1824-1860) was born in Nashville, Tennessee, the son of a Scottish immigrant. After graduating from the University of Nashville at the top of his class (at age fourteen), Walker (right) went to Europe to study medicine. Returning to the United States, he continued his studies in Philadelphia, where he obtained a degree at age nineteen and practiced medicine for a short time. Moving south to New Orleans in 1845, he became a lawyer and a newspaper editor. In 1850, after his deaf-mute fiancée died, he moved to San Francisco.

In California, Walker was a newspaper man and, when not fighting duels, got involved in the Manifest Destiny movement.  It was then that Walker seized upon the idea of conquering Latin America and turning the whole region into a slavocracy. This slaveholding empire encircling the Gulf of Mexico and the Caribbean states, including Cuba, was sometimes referred to as “the golden circle.”  In 1853, Walker traveled to Mexico to try and convince the government there to give him a grant to establish a colony on the border between Mexico and the United States. Not surprisingly, Mexican officials refused. Not deterred, Walker made plans to raise his own army to take land from Mexico and establish the “Republic of Sonora,” funded by the sale of bonds, or “scrips,” only redeemable in (you guessed it) the “Republic of Sonora.” 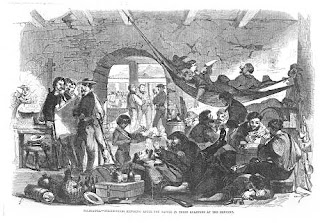 In October, Walker and forty-five men landed in sparsely-populated Baja, California, captured the capital, and declared it the capital of the “Republic of Lower California,” with Walker as president. When he was unable to actually go into Sonora as planned, Walker simply declared that Baja was part of a larger “Republic of Sonora.” Not surprisingly, he was soon ousted by the Mexican government. Back home in California, U.S. officials put him on trial for starting an illegal war. The jury, however, acquitted him in just eight minutes.

Still looking to establish himself somewhere in Latin America, Walker found a sympathetic benefactor in Nicaragua, which was at the time caught up in a civil war between political parties. To help combat their rivals in the Legitimist Party, the Democratic Party called for help from Walker. Nicaraguan president Francisco Castellon Sanabria (right), a member of the Democratic faction, invited Walker to bring up to three hundred “colonists” to Nicaragua and gave them the right to bear arms. Technically, therefore, they were invited guests. In reality, Walker now had the freedom to act as a mercenary (the image above shows some of his rag-tag volunteers). Sailing from San Francisco on May 3, 1855, with sixty men (far short of the 300 allowed), Walker landed in Nicaragua and was joined there by almost three hundred locals and Americans. 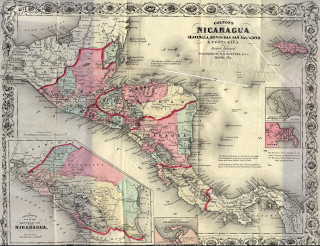 Walker immediately attacked the Legitimist town of Rivas. Although his first attack failed, Walker’s little army defeated the Legitimist forces on September 4 and on October 13 captured the opposition capital of Granada. Having accomplished the task of knocking out the opposition party, Walker became the de facto ruler of Nicaragua after Francisco Castellon died. Walker’s regime was recognized by U.S. government in 1856, during the Franklin Pierce administration. American recognition was soon withdrawn, however, when Walker conspired to seize the Accessory Transit Company, owned by Cornelius Vanderbilt (the company controlled the route across Central America prior to the Panama Canal). Vanderbilt, infuriated by Walker’s hostile takeover, convinced Pierce to withdraw recognition. At the same time, Walker’s neighbors in Central America grew increasingly alarmed at rumors of more invasions by Walker’s men. To combat the growing threat, Honduras, Costa Rica and Guatemala formed a coalition army, with arms supplied by the British government and financial backing from Commodore Vanderbilt. In 1856, Costa Rica and Honduras declared war on Nicaragua.

Meanwhile, Walker went about installing himself as President after conducting a sham election. Inaugurated on July 12, Walker immediately reestablished slavery (outlawed by Nicaragua in the 1820s), made English the official language and changed the currency and banking system to be more in keeping with the Southern U.S. states, hoping to attract investors. 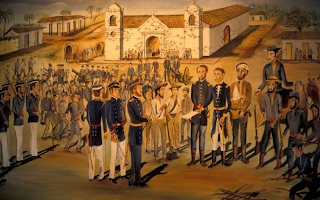 Although there was some interest in the new republic from Southerners, the experiment lasted less than a year. By December 14, 1856, Granada was surrounded by the coalition army. Rather than risk capture, one of Walker’s generals decided it would be best to burn the city and fight their way out. They did so, and left the city in ruins, concentrating their forces in the city of Rivas. For five months, his army held out against superior forces. Finally, on May 1, 1857, Walker surrendered to a U.S. naval officer, who negotiated the surrender of the city (right) and then shipped Walker back to the United States.

Back home, many people considered Walker to be a hero, and he considered himself the legitimate president of Nicaragua. As such, he toured the South to try to raise funds to retake Nicaragua. In Mississippi, as elsewhere, his public appearances created a lot of sympathy and excitement. In a November 1860 Natchez newspaper, the editor predicted with great anticipation the creation of a slaveholding empire along the Gulf of Mexico, which would become, the newspaper wrote, “simply a Southern lake, to be whitened with thousands of Southern sails.” Walker tried several times to return to Nicaragua, but was foiled in each attempt.

In 1860, British colonists in the Bay Islands (off the coast of Honduras) approached Walker about establishing an independent, English-speaking government (they were fearful of the Hondurans). Never one to pass up an opportunity, Walker agreed and boarded a ship, arriving in the port city of Trujillo. This time, he was captured by the British Navy, which regarded anyone intending to upset the region’s political balance to be dangerous.  Instead of being shipped back to the United States, Walker was delivered to Honduran authorities, and Walker was summarily executed by firing squad on September 12, 1860 (above). After all this, he was still just 36 years old. He is buried in Trujillo (his grave is seen at right). Because of the Walker incident, the British gave the Bay Islands to the Honduran government. Thus ends the story of William Walker. 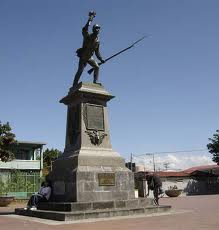 Although Walker failed to make his dream come true, his daring made him a popular figure in the South, where he was known as “General Walker” and the “Grey-Eyed Man of Destiny.” In Central America, however, the military campaign to oust him is a point of pride for Central American independence. In fact, there is a national holiday in Costa Rica (on April 11) to celebrate the victory against Walker at Rivas and the bravery of Juan Santamaria, Costa Rica's greatest national hero (his monument is seen here). A drummer boy, Santamaria volunteered to advance across open ground in order to torch a stronghold held by Walker's men during the battle of Second Rivas. Although he was killed by a sniper, Santamaria successfully applied the torch and helped win the battle for the Costa Rican army. Whether this is factual or not is of secondary importance; today, Juan Santamaria is a national hero akin to those of the American Revolution in the U.S. On the other side of the ledger, William Walker's reputation in the region is infamous, and he is still remembered with great scorn. His reputation is so toxic that when a U.S. Ambassador was appointed to El Salvador in 1988, it caused a wave of consternation in Latin America. The ambassador's name? William G. Walker.