Born about 1764 in what is now Noxubee County, Pushmataha is considered by many to be the greatest Choctaw chief, at least in recorded history. During his life, Pushmataha fought in wars against both Europeans and Native Americans and negotiated on behalf of his people with a U.S. Government which ultimately betrayed his trust and allegiance.

There is disagreement (or perhaps just little known) about Pushmataha's childhood or parents. What is known is that at an early age he was involved in military campaigns waged by the Choctaw against other tribes, namely the Osage and Caddo west of the Mississippi in the 1780s. These conflicts were often the result of competition over hunting grounds and game, but also involved the fur trade with Europeans. Regardless of the cause, Pushmataha's star as a warrior was on the rise, and his name, which means "a messenger of death," is indicative of his reputation for fighting ability. 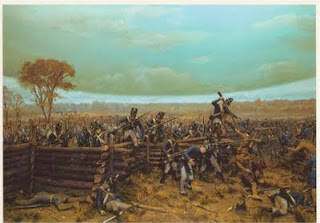 Because of his skills as a military leader, Pushmataha was chosen in 1800 to lead as mingo (or chief) the Six Towns district of the Choctaw, one of three Choctaw administrative areas. In this capacity, he was often called on to represent the Choctaw in their dealings with the United States, which continually encroached on Choctaw lands. In 1805, he was one of the negotiators in the Treaty of Mount Dexter, which resulted in the Choctaws ceding land to the U.S., which meant the loss of millions of acres of Choctaw land in exchange for a small annual payment to the tribe and some trade goods. Despite this, when Tecumseh tried to form alliances among various tribes to take back the lands lost to the United States through treaty and other means in 1811, Pushmataha rebuffed Tecumseh's call and instead threatened to fight anyone who took up arms against the United States.

Indeed, Pushmataha led the Choctaw in an alliance with the U.S. during the War of 1812, initially raising a company of 500 men and garnering an officer's commission in the American army. After the Red Stick faction of the Creeks defeated a force of white militia and southern Creeks at Fort Mims, Alabama, Pushmataha sent Choctaw warriors to the aid of Andrew Jackson in his fight against the Red Sticks in the Creek War, and the Choctaw fought alongside U.S. troops at the Battle of Holy Ground and at Horseshoe Bend (above), a victory for the Americans and their Native American allies. By the time of the battle of New Orleans, however, not many Choctaw remained in the army (as they had defeated their Creek enemies, the Red Sticks), but they were the only tribe represented among Andrew Jackson's troops. 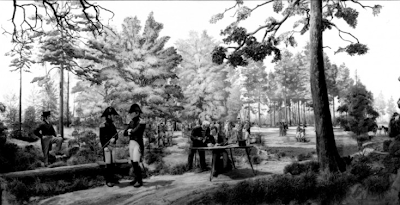 After his return from the War of 1812, Pushmataha was elected as the principal chief of the Choctaw nation. As chief, he pushed back against the efforts of Protestant missionaries who arrived in 1818, but he was open to new technology, like the cotton gin, which might improve the lives of his people. He also invested much of his personal wealth in establishing Choctaw schools. As chief, he had to return to more treaty negotiations with the U.S. Government. In the Treaty of Doak's Stand (in 1820), Pushmataha faced off against his old ally Andrew Jackson, who, along with General Thomas Hinds, presented the government's "offer" to move the Choctaw off of half their land in Mississippi in exchange for land in Arkansas. As Pushmataha was aware that white settlers were already homesteading on the land in Arkansas, which was of less value than the Choctaw land in Mississippi to begin with, he balked at the proposal. However, the reality was that Choctaw land was continually under threat from encroaching settlements, and Andrew Jackson essentially held all the cards. Faced with this reality, Pushmataha reluctantly agreed to sign the treaty. In return, Jackson agreed that the settlers would be evicted from the new Choctaw land in Arkansas and peace and harmony between the Choctaw nation and the United States were “declared to be perpetual.” 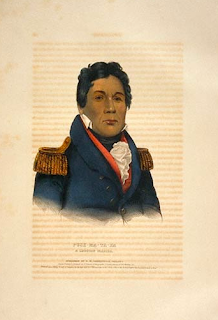 As one might expect, however, the United States failed to uphold its end of the bargain, as more and more settlers moved on to land promised to the Choctaw. Dubious of the offer to begin with, many Choctaw refused to relocate across the river. In 1824, Pushmataha, along with two other chiefs in the region, went to Washington to protest the non-enforcement of the treaty, and demanded either expulsion of white settlers from the lands in Arkansas, as agreed, or just compensation. Among the delegation to Washington was Maj. John Pitchlynn, a Choctaw Agent who acted as an interpreter. Pitchlynn established a home along the Tombigbee River and was married to a Choctaw woman. A son, Peter Pitchlynn, was named principal chief of the Choctaw in Oklahoma in 1864-66. 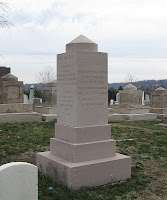 While in Washington, D.C., Pushmataha met with President James Monroe, Secretary of War John C. Calhoun and the Marquis de Lafayette, who was also visiting Washington. He also sat for a portrait in his U.S. Army uniform. The painting by Charles Bird King (above) was in the Smithsonian until 1865 when the original was destroyed in a fire. However, numerous prints were made and it has become the most famous image of Pushmataha. In December, while still in Washington, Pushmataha developed a respiratory infection. As he was seriously ill, the old warrior was visited by Andrew Jackson, who had forced the treaty on the Choctaw. Knowing he was about to die, Pushmataha requested full military honors, which was granted. He died on Christmas Eve in 1824. Given full military honors as a Brigadier General, the funeral procession stretched for a mile and included bands, military units and carriages filled with celebrities. Thousands lined to route to pay their respects to Pushmataha. To recognize the occasion, Jackson sent a medal to Pushmataha's oldest surviving son. Pushmataha was buried in the Congressional Cemetery in Washington. The monument marking his grave (left) reads: "Push-ma-ta-ha, a Choctaw chief, lies here. This monument to his memory is erected by his brother chiefs who were associated with him in a delegation from their nation in the year 1824 to the general government of the United States. Push-ma-ta-ha was a warrior of great distinction he was wise in council — eloquent in an extraordinary degree, and on all occasions & under all circumstances the white man's friend." 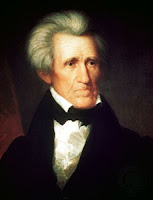 In a few years, General Jackson became President Jackson and completed the betrayal of the Choctaw and other tribes by overseeing their removal during the infamous “Trail of Tears.” During his life, Pushmataha did his best to both honor his commitments to his old friend Jackson and to his people. Pushmataha, in many ways, straddled two epochs – one which reflected the traditions of the Choctaw nation and the other which reflected the grim reality of the new world, a world in which native people would be pushed aside for the ever-expansive United States.