One of my fondest memories (from a very long time ago) was a place on the Mississippi Gulf Coast called Eight Flags. As a young boy, what I remember most about it was a western town where there were gun fights and bad guys falling off of buildings. What could possibly be more exciting than that?? 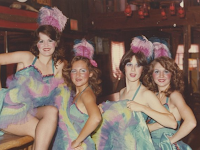 The actual name of this quirky little attraction was the "Eight Flags Deer Ranch." The Deer Ranch, as the name implies, was a deer petting zoo. According to one of the park's brochures, visitors would be "amazed and thrilled as you actually hand feed, pet and photograph tame deer from many parts of the world." If that wasn't amazing enough for you, there were drum-beating ducks, a bird vaudeville theatre, can-can girls at the Red Dog Saloon (advertised as an "authentic old saloon with air conditioning added"), the piano virtuosos of "Professor 88," and (my favorite) western gunfights at Six Gun Junction. Eight Flags was located just off of Highway 90 right on the line between Biloxi and Gulfport, and was a part of Gulf Coast tourism from 1962 to 1984. With shows every day during the summer months and on weekends for several other months of the year, the attraction was a stop during many a family vacation, and a great place for local teens to work during the summer. Many of those who worked there - included the deer poop sweepers - consider it the best job of a lifetime.

The Eight Flags Deer Ranch was the creation of Don Jacobs (right). A U.S. Navy veteran during World War II and a graduate of Marquette University, Jacobs had a role in several other Gulf Coast tourist attractions during the post-World War II period. Jacobs also founded the Biloxi Shrimp Tour Train, owned the famous Eight Flags monument on the beach at the foot of Debuys Road, ran the Harbor Queen Boat Tour in Gulfport, and was the CEO of J&L Enterprises, which owned and operated the Marine Life Oceanarium in Gulfport. One of the most iconic and recognizable attractions on the Coast, Marine Life was destroyed during Hurricane Katrina. 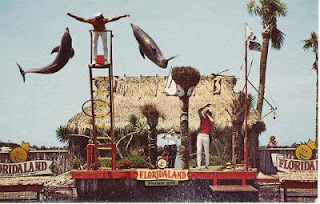 In addition to the attractions in Mississippi, Don Jacobs also ran the "Floridaland" tourist attraction in Sarasota, a deer ranch at Panama City Beach, and "Porpoise Island" at Pigeon Forge, Tennessee, which was a Hawaii-themed attraction complete with Hula dancers, sea lions, roller-skating birds, and another deer-petting zoo. Like Eight Flags, "Floridaland,"(above) which promised "Everything Under The Sun," included a petting zoo and an old west-style town with can-can girls performing at the Gold Nugget Saloon. Obviously, this was a tried and true formula for Jacobs' parks. He also owned Marine Animal Productions, which provided marine animals, veterinarians and trainers for theme parks in New Jersey, Ohio, Pennsylvania, Virginia, Acapulco, and Toronto. At his home on Beach Boulevard in Biloxi, Jacobs hosted foreign heads of state, national and state leaders, and well-known personalities like Donald Trump and Burgess Meredith.

Don Jacobs died in November 2011 at age 85 in Gulfport. Along with his business associate George Powers, Jacobs provided, through his many creations, happy memories for thousands on the Gulf Coast, especially those who had the opportunity to work at Eight Flags. To celebrate the legacy of the place, a group of former employees recently held a reunion and put on a show to a packed house. Eight Flags was not the greatest theme park - it didn't have huge roller coasters or a wave-action water park, but it was good, clean fun. Such attractions have largely vanished from the American landscape, but thankfully not from our memory.