Tilghman Tucker, born in North Carolina in 1802, studied law and moved to Columbus, Mississippi, where he opened a legal practice. Subsequently elected to both the Mississippi House of Representatives and the State Senate, Tucker (right) was elected governor in 1841. The first governor to live in the Mississippi Governor's Mansion, his administration was, unfortunately, marred by scandal involving another statewide elected official.

In 1841, Richard S. Graves was elected State Treasurer. In the fall of 1842, the U.S. Secretary of the Treasury, Walter Forward (below), sent a draft (or check) to the State of Mississippi in the amount of $165,079. The funds were part of a trust called the Two Percent fund to establish railroads in Mississippi. The draft, however, was actually made out to Richard Graves personally and not to the State of Mississippi, and on October 6, Graves, without any other authority or approval, cashed the draft and secured the bulk of the funds in his office. It was not until January 5, 1843, that Governor Tucker received a letter from Congressman Jacob Thompson of Oxford informing him of the transaction, the first inkling he had that something might be amiss, and it certainly was. Apparently, Graves had schemed (perhaps with the knowledge of the Secretary of the Treasury) to secretly use the funds to purchase State bonds for a quick, turnaround profit. 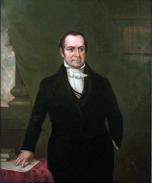 After investigating the situation, the governor and the attorney general decided Graves had to be impeached. In March, 1843, Richard Graves was arrested and charged with embezzlement. During the resulting impeachment trial, which was conducted by Chief Justice William L. Sharkey, Graves was allowed to remain at his home under house arrest, guarded by the Hinds County Sheriff. One evening, Mrs. Graves came to visit her husband and was allowed into the room where he was being held prisoner.  Less than an hour later, Mrs. Graves left the room, passing the guard on the way out. There was a problem, however - it wasn't Mrs. Graves, but was in fact the State Treasurer dressed in women's clothes! Upon further investigation, Mrs. Graves was found still in the bedroom. With a head start, Graves escaped and eventually made his way to Canada.

Soon after his escape, Mrs. Graves asked to see the governor, and she turned over a little more than $160,000 in Mississippi treasury warrants, U.S. treasury notes and foreign gold. Soon thereafter, she joined her husband in Canada. Meanwhile, the governor appointed a new state treasurer (William Clarke), who discovered additional monies hidden in the treasurer's office, and he reported to the Legislature that a total of $44,838.46 was still unaccounted for. Then there was the matter of the state treasurer's bond, which is meant to insure the honesty and faithful performance of a public official's duties. Graves' bond had been posted upon his election by ten friends, included R.W. Graves, possibly a brother. Because of Graves' embezzlement, the state sued and won a judgement against these individuals for a sum of $51,865. Clearly, Graves not only betrayed his state and violated his oath of office, but betrayed his friends as well.

In the wake of the scandal, Governor Tucker was criticized for not having more oversight over the treasurer's office and was accused of not being forceful enough in investigating the matter. Walter Forward, the U.S. Secretary of the Treasury, resigned from President Tyler's cabinet the next year, although apparently unrelated to the Mississippi scandal - he just couldn't get along with Tyler. As for Richard Graves, he never returned to Mississippi, although he tried. About 1850, his wife came back to Mississippi and personally appealed to the Legislature to grant amnesty to her husband, who, she said, was in poor health and only wished to come home where he could live out what remained of his life. She painted quite a pathetic picture of a broken, sorrowful, homesick man, but the Legislature declined her request. So, after spending a few days at her old home in Carroll County, she made the journey back to "the frigid region where she had left her husband, an exile in the land of strangers."