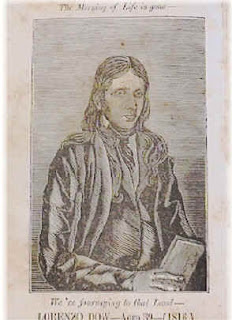 Lorenzo Dow was born in Coventry, Connecticut in October 1777. A sickly child, Dow was always troubled by religious questions. After great deliberation, he decided to join the Methodist Church and applied unsuccessfully for admission to the Connecticut conference in 1796.  Two years later, he was accepted and sent to New York, Massachusetts and Vermont as a traveling preacher, against the wishes of his family.

In the same year, Dow went to Ireland and England to serve as a missionary to convert Catholics (which was quite a undertaking in Ireland). Because he was a bit eccentric, he drew large crowds and introduced the concept of camp meetings to England. Due to poor health, however, he returned to the United States, no longer officially associated with the Methodist Church, though he still preached Methodist doctrine. In 1802, Lorenzo Dow was in the Albany, New York area, where he railed against "atheism, deism, Calvinism and Universalism." This part of western New York would be known as the "burned-over district" because of the religious fervor which swept through it in the early 19th century, generating such movements as the Mormons, Shakers and the Millerites. Long before these groups took hold, however, Lorenzo Dow moved south to Alabama, Mississippi and Louisiana. 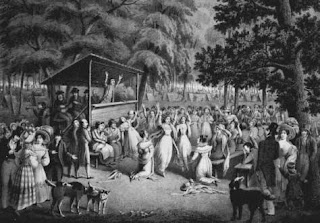 Just as he had in Britain, Dow drew large crowds wherever he went. Preaching mainly in the open, his appearance and technique was probably the main attraction for many who came to hear his message. Known widely as "Crazy" Dow, he was not known for cleanliness, and sported long hair and a beard that appeared to have "never met a comb." He owned just one set of clothes, carried no luggage other than a box of Bibles, and rarely, if ever, bathed. Dow would wear his clothes until they were ragged and full of holes, and relied on the kindness of strangers to donate replacement clothing items whenever needed. His style of preaching was almost as striking as his appearance. He would shout, scream, cry and use any other gimmick to attract attention. Usually traveling by foot (unless someone donated a horse), he had the habit of appearing unannounced at public gatherings and proclaiming for all to hear that Lorenzo Dow would appear in the same place in exactly one year. To everyone's astonishment, he almost always appeared as promised and was able to attract huge crowds as a result. He was also a confirmed abolitionist, and often driven out of towns in the South with stones, eggs and rotten vegetables. Despite all this, Lorenzo Dow is said to have preached to more people than anyone else during the period, and he even managed to find a wife (said to be almost as eccentric and "tinged with a small portion of fanaticism and superstition."). 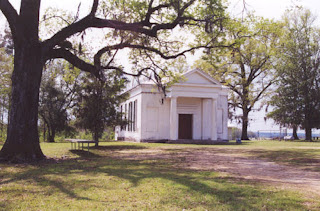 In 1803, Lorenzo Dow was preaching in the Natchez and Washington, Mississippi, area. With few people attending his sermons at first, he proclaimed that it was doubtful if there were even three Christians in Natchez, black or white. He got lucky, though, when Andrew Marschalk, the publisher of the only weekly paper in Mississippi, found some very critical articles about Dow from papers in Kentucky and decided to reprint them, right next to a meeting notice submitted by Dow.  This did wonders for attendance, and "Crazy" Dow eventually did well in the Natchez area, helping to establish Methodist congregations up and down the river. In 1803, Dow sold a watch that had been given to him in order to purchase land for a church at Kingston, upon which a log meeting house was built. Kingston United Methodist Church is still going. The present structure, a brick church, (above) was built in the late 1850s. 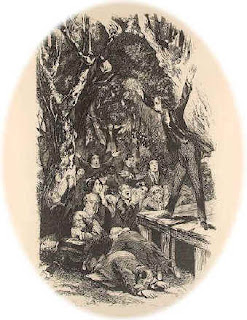 Dow also held a series camp meetings near Port Gibson with members of Randall Gibson's family in attendance. At one such meeting, the people were just about to leave when Dow shouted in a loud voice that he had the latest news from hell! Curious, they stopped packing and waited until he had finished preaching. Not everyone was impressed with "Crazy" Dow's antics. In Kentucky, William Winans, another early Methodist leader in Mississippi, heard that Dow was in the vicinity and rode ten miles on a cold December night to attend the meeting, expecting to see a man of "dignity and piety." What he heard was "Dow's doggerel about someone who supposedly 'vomited three black cows' and 'the Fable of the Old Man, his Son and their Ass.'" He concluded after witnessing several more meetings led by Dow that apart from his being eccentric, he was mediocre at best. Fame, Winans determined, was not necessarily a mark of merit or greatness.

Unfortunately for Winans, he would later find himself serving in the same area with Dow near Port Gibson (on the Claiborne Circuit). By this time, Dow had finally settled down and was part owner of a mill on Clark's Creek, where he had lived long enough "to sink down, in public estimation, to the ordinary standard of respectable humanity." Lorenzo Dow could not stay in one place too long, however, and soon sold his interest in the mill and left Mississippi. Dow eventually moved on to South Alabama and Georgia, where he could again dazzle onlookers with his eccentricities. Rev. Dow died in Washington, D.C. on Feb. 2, 1834, and is buried in Oakhill Cemetery in Georgetown. As a testament to his influence and popularity, thousands of children were named for him in the mid-19th Century. Despite his odd behavior, he is credited with taking the Gospel into the wilderness and helping to establish the early church in Mississippi.