The International Checker Hall of Fame 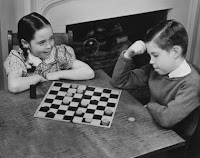 The game of checkers, or some form of it, has been around for quite a long time. A game similar to checkers dates to about 3,000 B.C.E. from the Middle East, and forms of the game have been found at ancient Egyptian sites.  The modern version of checkers came along in the 12th Century or thereabouts. “Draughts,” an English form of the game, dates to the 1400s and has been a part of the American landscape since the colonists arrived. The game acquired the name "checkers" only after it came to this continent. Regardless of what it is called or the various rules of play that have changed through the centuries, the basic game of checkers has remained a popular pastime. And, for a time, the focus of the “checker world” was centered right here in Mississippi in the little town of Petal at the International Checker Hall of Fame.

The International Checker Hall of Fame (ICHOF) opened in 1979, and was the brainchild of Charles Clendell Walker (left). Born in 1934, Walker was a millionaire who made his money in the nursing home and insurance business, but his real passion was checkers. Thoroughly dedicated to the promotion of the game, Walker served as secretary of the American Checker Federation, as editor of Checkers Magazine and as president of the World Checker Draught Federation. In the checker world, he is perhaps best known for playing 306 games at one time while losing only one, a feat recognized by the Guiness Book of Records. While not playing checkers, he also founded the "International Christian Church," though it apparently only consisted of Walker, his wife, and his daughter. 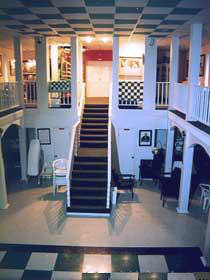 Walker operated the ICHOF from a 32,000-square-foot, Tudor-style house known as "Chateau Walker," complete with a seven-story tower, a tournament room with 24-foot-high ceilings and the two largest checkerboards in the world. The Hall of Fame included a library of checkers-related historic materials from the 1700s to the present, checkers artifacts and a $10,000+ statue of checkers grand champion Marion Tinsley (above). A Baptist minister, Tinsley (1927-1995) once claimed to have spent approximately ten thousand hours studying checkers while in graduate school, and is considered the greatest checkers player to have ever lived. According to a newspaper article written in 1980, Walker's fascination with checkers extended beyond the Hall of Fame itself and was found throughout his house. According to the article, Walker's house included checker-board tables, walls and floors, a bed canopy in the shape of a crown, and, of course, a dog named Checkers. 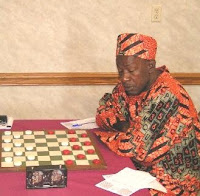 The International Checker Hall of Fame was not just a museum and research facility, but was also the site of the World Checker Championship and other tournaments. In 2006, for example, the World GAYP (“Go As You Please”) Title Match was held at Chateau Walker between Ron “Suki” King of Barbados (left) and Jim Morison of Kentucky. The winner that year was King, who was the defending champion. Unfortunately, it was the last year that the ICHOF would host such an event, as the whole thing literally came crashing down around Walker. 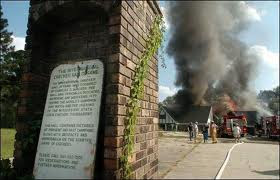 In 2003, Charles Walker was charged with some irregularities involving his “church” and the purchase of eight motor homes. Two years later, he was caught in a sting operation and accused of using the church and the International Checker Hall of Fame to launder $6 million in drug money proceeds. Walker pleaded guilty, and awaited sentencing, which was delayed because of Hurricane Katrina. Even though he had been convicted, the ICHOF remained open for match play and championship tournaments. When he was sentenced to serve five years in a federal prison, the Hall of Fame finally shut its doors, although his family continued to live in "Chateau Walker." Then, on September 29, 2007, an unexplained fire started in the tower and consumed the entire Hall of Fame, including the giant checkerboards, the library, and the statue of Marion Tinsley.

All is not lost for the world of checkers, however. Having served his prison term, Charles Walker is reopening the International Checker Hall of Fame. In June 2011, approximately fifty people attended the Mississippi Open Checker Tournament in the refurbished Great Hall of the ICHOF. Despite Walker's checkered past, Petal may soon rise, Phoenix-like, from the ashes to once again become the checkers capital of the world.