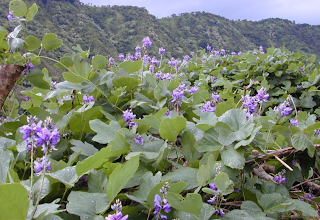 If you've ever travelled anywhere in the South, you already know that a significant part of the landscape is a fast-growing vine with the strange name of kudzu. With the ability to overwhelm and cover almost everything in its path, kudzu looks like a green blanket sprawled on top of the earth, and it’s growing each and every day. But it has not always been this way. This plant, and especially the alien landscapes it creates, would be unknown to anyone in the South prior to the 1920s. 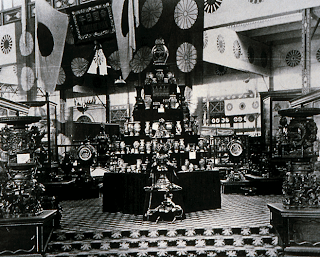 Kudzu was actually brought to the United States in 1876, making its debut at the Centennial International Exhibition of 1876 in Philadelphia, Pennsylvania. Attended by approximately ten million people, including President Grant, the Centennial Exhibition was the first World's Fair held in the United States. Located in Philadelphia's Fairmount Park, the fair was a huge success despite sweltering temperatures through June and July. Visitors making the trek got to see some amazing products for the very first time, including Alexander Graham Bell's telephone, a Remington typewriter, Heinz Ketchup, the precursor to the electric light and Hires Root Beer. The right arm of the Statue of Liberty was also on display and used as a fundraiser to complete the statue. Among the international exhibits, the Japanese pavilion (above)  included a garden filled with native Japanese plants. One of the plants, kudzu, was a hit with American gardeners, who saw the leafy vine with sweet-smelling blossoms as an ornamental plant. 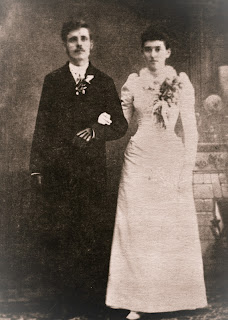 Kudzu continued to be shown at subsequent world fairs in Chicago and New Orleans. In Chicago, two enterprising nursery owners from Chipley, Florida (located in the Florida panhandle), saw kudzu and decided to try and grow it at their nursery. And grow it did. In the process, Charles Earl (C.E.) and Lillie Pleas discovered that farm animals really liked to eat the plant (which is related to a variety of beans) and decided to market kudzu as forage and as a solution for land conservation in the 1920s rather than an ornamental plant. The Pleas (right), who were transplanted Quakers from Indiana, were early environmentalists and saw kudzu as beneficial to the land in many ways. The couple sold kudzu seedlings by mail order; at the same time, they petitioned the federal government to certify the plant’s nutritional value as fodder. When the U.S. Department of Agriculture finally decided they were right, it looked like the Pleas' crusade on behalf of kudzu would finally pay off. Unfortunately, they were unable to purchase the required performance bond for the government contract, and others ultimately benefitted financially from the Pleas' work. Even so, the Glen Arden Nursery is "created" as the source of kudzu in the South. 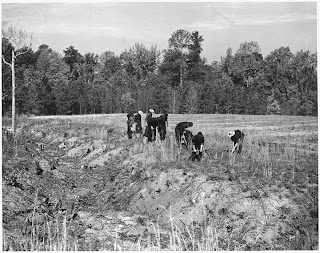 In the 1930s, during the height of the Great Depression, the U.S. Soil Conservation Service promoted kudzu for erosion control and hired hundreds of men to plant kudzu through the Civilian Conservation Corps. In addition, farmers were paid up to $8.00 per acre to plant kudzu fields in the 1940s. Between 1935 and 1942, 100,000,000 kudzu seedlings were distributed across the southeast by the Soil Conservation Service. In the photo to the left, CCC workers are planting kudzu on a farm in Newberry County, South Carolina. In the 1940s, kudzu's biggest champion was Channing Cope, an agricultural columnist for the Atlanta Constitution, who grew kudzu on his farm southeast of Atlanta. Calling kudzu the "miracle vine," Cope organized the Kudzu Club of America, which was dedicated to planting it whenever and wherever the opportunity presented itself. By 1945, an estimated 500,000 acres in the South were planted in kudzu. 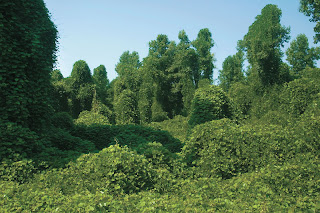 As the vine continued to grow at a more rapid pace than anyone apparently ever imagined, however, enthusiasm for the “miracle vine” started to fade. For one thing, kudzu started smothering pine trees and interfered with the construction and maintenance of roads, telephone poles, etc. In other words, kudzu was just too much of a good thing. So, after promoting its value as a conservation tool and use as a forge crop for years (and spreading it far and wide), the federal government decided to take kudzu off its list of acceptable cover crops in 1953, and in 1972 reclassified the plant as a "weed." In 1993, a Congressional study estimated that kudzu was responsible for $50 million in lost timber and agricultural production. And yet, kudzu, as everyone knows, is here to stay. There are folks still promoting kudzu for a variety of purposes, including use as basket-making material, as an alternative to hay, as a cure for alcoholism, and as food for humans. On this front, there are a variety of recipes out there for kudzu, including kudzu quiche, kudzu jelly and (my favorite) fried kudzu chips!