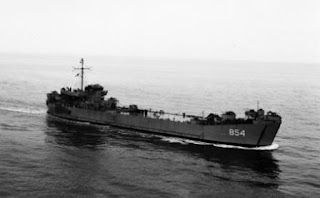 During World War II and in America’s other conflicts in the 20th Century (i.e., Korea and Vietnam), naval power was essential in delivering the troops and equipment necessary to do the job at hand. Among the most under-appreciated but necessary components of any amphibious operation, especially in the Pacific Theater during World War II, was the Landing Ship, Tank, or LST. Created during WWII, these ships were capable of carrying vast amounts of cargo, vehicles and troops right to the shoreline. Among the LSTs which saw extensive service in World War II and beyond was LST-854, later designated the USS Kemper County.

LST-854 was laid down by the Chicago Bridge & Iron Company in Seneca, Illinois, in August 1944, and launched on November 20, with Lieutenant E. J. Robeson in command. The ship departed for the Pacific from New Orleans in January 1945. By April 1, she was off the coast of Ulithi in the Caroline Islands, amid preparations for the invasion of Okinawa. With an Army Aviation Engineer Battalion on board, LST-854 arrived at Okinawa on April 18, and despite heavy Japanese air raids successfully unloaded the troops and equipment. From then until the end of the war, LST-854 operated between the Philippines and the Okinawa. At the end of the war, the ship was used to move Navy and Marine Corps personnel to various ports in the Pacific until 1949, when the ship returned to the United States and was decommissioned at Puget Sound Navy Yard.

With the outbreak of the Korean War, LST-854 was brought back into service on November 20, 1950, just a year after being mothballed. After training for her crew in San Diego, she moved to the theater of war and was used to transport prisoners-of-war and participated in other logistical operations. The image above is LST-854 at Taeyonpyong, Korea, in 1952. In January, 1952, LST-854 was involved in the landing of the 40th Division at Inchon and, later on in the conflict, shuttled U.N. forces to various points in the region. With the truce that ended active fighting in Korea, the ship was again used to transport prisoners-of-war for exchange. 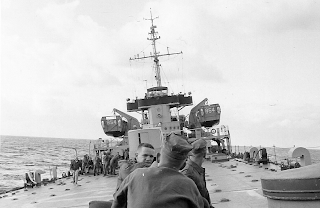 Returning to San Diego in October 1953, LST-854 was renamed the USS Kemper County on July 1, 1955, the only United States ship bearing that name. For the next five years, the Kemper County was involved in amphibious training exercises in California and Hawaii and for transport. This photo (right) was taken by am American serviceman from the deck of the ship as his unit was on the way to Japan in 1959.

In 1965, she would once again be called into action, this time in support of operations along the coast of Vietnam. Arriving in Da Nang in November 1965, the Kemper County would spend the rest of the war in riverine operations in the Mekong Delta. Four times, the Kemper County ascended enemy-controlled waters as far as 90 miles inland to deliver supplies to South Vietnamese troops, and in March 1966, she came to the assistance of a burning tanker, the SS Paloma, which had been seriously damaged during a Viet Cong attack on the Saigon River. After reaching the Paloma, the Kemper County shelled the riverbank while assisting the burning tanker. In the photo below, the Kemper County is seen in Vietnam alongside an Australian barge. 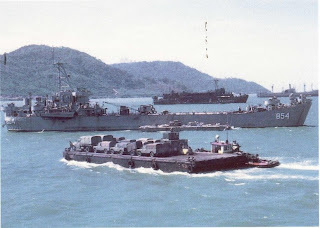 With the end of the war in Vietnam, the Kemper County was decommissioned for the last time on May 28, 1969. She was transferred to to the government of Barbados in July 1975 and renamed Northpoint and later sold to Panama and renamed again El Gato Blanco. There is no further information on her disposition.