The Sinking of the Ticonderoga 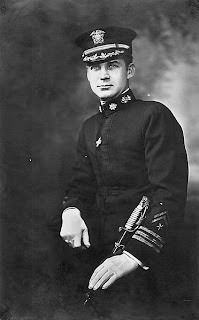 Eighteen individuals with ties to Mississippi have been awarded the Medal of Honor. Many others were awarded Medals of Honor for actions in Mississippi during the Civil War. Of course, these were all for Union soldiers and sailors (as the Medal of Honor would obviously not be awarded to Confederate soldiers). For the eighteen Mississippians, the recipients represent all wars from the Civil War to Vietnam. There is only one for World War I. Awarded to Lt. Commander James J. Madison, the citation is for bravery at sea. The curious thing is that Madison had hardly any ties to Mississippi.

James Jonas Madison (right) was born in Jersey City, New Jersey, in 1884.  In 1917, he was appointed as a Lieutenant in the Naval Reserve, apparently from Mississippi.  As he was previously engaged as a merchant marine, the presumption is that he was somewhere in Mississippi when he enlisted and was commissioned. Regardless, Madison was assigned to the cargo steamship USS Ticonderoga. Built in 1914 as a German merchant steamship (as the Kamilla Rickmers), she was seized by the U.S. in 1917 and renamed Ticonderoga.  Commissioned in January 1918 in Boston, the USS Ticonderoga’s mission was to take cargo, including vehicles, animals and other supplies for the U.S. Army, to France. With James J. Madison in command, the Ticonderoga made several successful voyages across the Atlantic in 1918. 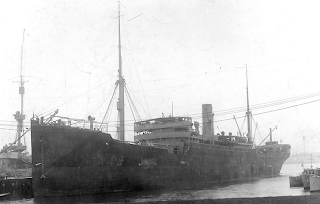 In early September, she was loaded with another cargo bound for France (including some Army troops), and joined a convoy which left New York on September 22. During the night of September 29, Ticonderoga (left) developed some engine trouble and had to leave the convoy to work on repairs. Left alone, she was, unfortunately, easy prey for German U-boats operating in the Atlantic. At 5:20 a.m. on September 30, 1918, crew members of the Ticonderoga spotted the German submarine U-152 on the surface. U-152 was a cruiser-type submarine built at Hamburg. Commissioned in the fall of 1917, she had originally been built for transporting supplies, but was converted to a combat submarine for operation in the Atlantic. As the Ticonderoga’s crew prepared for action, Lt. Commander Madison tried to ram the U-boat, but was unsuccessful. When U-152 opened fire, the Ticonderoga suffered several hits, knocking out her forward gun, setting her on fire, killing several men and wounding, among others, Madison. Although he was badly wounded, Madison remained on the bridge and turned the ship around so the after gun could go into action against the sub. In response, U-152 submerged and then surfaced again, taking out the after gun, rendering the Ticonderoga defenseless. Free to fire on the Ticonderoga without fear of return fire, U-152 pounded the ship with her two 15cm deck guns and fired a torpedo just behind the engine room.

With heavy casualties, the Ticonderoga began to sink. Abandoning the ship under a white flag, the survivors tried to cram onto just one boat and one raft available (the others sank upon launching). Lt. Commander Madison was by this time unconscious due to a loss of blood and was lowered into the lifeboat by his crew members. Even as the ship was sinking, U-152 continued to fire on the surviving crew members and searched for U.S. Navy officers. Two were captured: Executive Officer Lt. Frank Muller and Lt. Junius Fulcher (in the photo above, the two officers appear on the deck of U-152 with the German crew members).The other survivors, including the critically wounded Madison, were left adrift in the ocean. Four days later, the British freighter Moorish Prince happened on the survivors. Out of 237 men on board the USS Ticonderoga, only twenty-four survived, including the two captured officers. The losses, which included 112 sailors and 101 soldiers, was the greatest combat loss of any U.S. Navy ship during World War I.

James J. Madison would eventually lose his leg because of the wounds suffered on the Ticonderoga, and died on Christmas Day in 1922. He was just 38 years old. Before he died, he was promoted to Commander and retired from the Navy in 1920.  In the citation for his Medal of Honor, Madison was recognized for “exceptionally heroic service.” Although his connection to Mississippi is somewhat difficult to establish, his Medal of Honor is credited to the magnolia state. Madison is buried in Fairview, New Jersey.