"...we morn the loss of a true friend:" The Death of Lewis Parmelee at Antietam

Today is the 150th anniversary of the battle of Antietam. On September 17, 1862, Robert E. Lee’s Confederate Army of Northern Virginia and George McClellan’s Army of the Potomac clashed along Antietam Creek, the first major Civil War engagement on northern soil. The result was a horrendous battle, an indescribable whirlwind of death and destruction. All in all, the battle produced approximately 23,000 casualties, the bloodiest single day in American history. 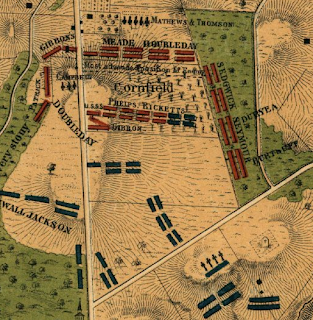 Among the thousands of casualties was an officer in the 2nd United States Sharpshooters. Lewis C. Parmelee (above), a native of New York and a veteran of the 7th New York State Militia, served as Adjutant for the regiment. Part of Colonel Walter Phelps’ brigade, the 2nd U.S. Sharpshooters, early on the morning of the great battle, was ordered into the Miller Cornfield, following the path of Gibbon’s “Iron Brigade.” As the regiment wheeled out of the cornfield and into an open field near the Hagerstown Pike, Confederate troops from Virginia and Louisiana poured rifle fire into Phelps’ men from behind a fence running beside the road. The regiment’s colonel, Henry Post, was wounded and retired to the rear, leaving command of the regiment to Parmelee. Urging his comrades forward, the Sharpshooters returned fire and the Confederates started to break, leaving “guns, knapsacks and everything that impeded their progress on the ground beside their dead and wounded comrades.” Caught in the middle of the maelstrom was a Confederate color bearer who had apparently advanced when the rest of his regiment retreated. After the color bearer was shot down, several men from the Sharpshooters raced to secure the flag, including Parmelee. The Adjutant won the race and grabbed the flag, which had been broken off at the top of the staff. Parmelee used his sword to raise the captured flag and rally his men, but he only advanced a few steps before he too was gunned down, riddled by no less than five bullets from Confederate defenders on the other side of the fence. As Parmelee fell to the ground, Private William Kerr of Co. A picked up the flag and took it from the field. 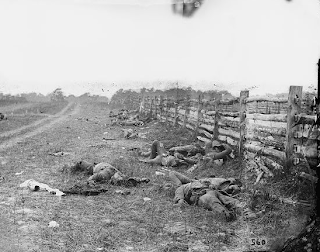 The fight continued in increasing fury after Lewis C. Parmelee was cut down, but for him the war was over. All along the Hagerstown Pike, bodies piled up as both sides struggled to gain control of the bloody field. Miller’s Cornfield was turned into a cauldron. After the battle, General Hooker himself said it was “never [his] fortune to witness a more bloody, dismal battle-field.” The 2nd U.S. Sharpshooters shed their own blood in buckets. Out of approximately 130 men who went into action, thirteen were killed or mortally wounded, fifty-one were wounded and two were missing, a slightly more than 50% casualty rate. After the battle, the Federals, who were left in charge of the field, began the grim task of burying the dead of both armies. Nine men from the Sharpshooters’ regiment were buried on the battlefield at Antietam, including Parmelee. His body was later recovered by his family and reburied elsewhere. The sad duty of writing Parmelee’s family about his death was assigned to the regimental quartermaster, Benjamin Calef. To Parmelee’s father, Calef wrote: 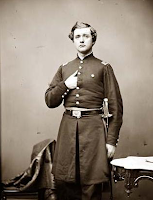 To me is given the painful task of informing you that your son, Lewis C. Parmelee, was killed in the battle near this place on the morning of the 17th. He had been leading on the remnant of our little band after the Col. Was wounded, & had just succeeded in taking a rebel color, when he was struck by a ball in the arm & breast. He could have lived but a short time. His body was recovered this morning & interred near the field. The place will be marked so it maybe known where he lies. It was impossible to have it sent home as the army is moving & there are no facilities for doing so. ‘Twere seeming mockery to offer our poor condolences in this hour of affliction. Yet I would assure you, our deepest sympathies are yours, & we morn the loss of a true friend, good soldier, & brave man, who has fallen in nobly defending a nation’s honor.

Calef closed the letter by saying his “effects will be cared for & sent to you at the earliest convenience.” Apparently, this was done, as many of Parmelee’s personal effects have survived through the years, including much of his New York militia uniform and a bloodied money purse from the battlefield. Among the items left behind by the untimely death of Lt. Lewis C. Parmelee is a book (left) published in 1861 called Hand-Book for Active Service. Written for the 7th New York Militia (Parmelee’s old regiment), the book was purchased at Philp & Solomons book store on Pennsylvania Avenue in Washington (Philp & Solomons also published books and had a photographic studio, where the last photograph of Lincoln was taken in 1865). Although the book is of passing interest to Civil War enthusiasts - it includes such hints as how to build field fortifications and recipes for bean soup for twenty five men - there is nothing particularly remarkable about the book, except that it is now part of the author’s collection. Purchased at a bookstore in Biloxi, Mississippi, prior to Hurricane Katrina, the book is inscribed by “Lewis C. Parmelee, Adjt. 2d Regt., USSS.” Whether the book was recovered from his knapsack at Antietam is unknown.

Today is the 150th Anniversary of the bloodiest day in American history. More than 23,000 men, both blue and gray, were killed, wounded or went missing at Antietam. Those numbers are staggering to consider. To put it in modern context, that’s more than seven times the number of people killed during the horrific attacks on September 11, 2001. For those who visit “ground zero” in New York City, it is impossible not to feel the sense of loss on a very personal level, especially when so many of the victims’ items were left behind. Today, “ground zero” at Antietam is a peaceful place, the beauty sometimes masking the sheer horror of what took place there and on every other Civil War battlefield. For me, though, the very personal sense of loss has been brought home on this day as I hold Lewis Parmelee’s little book and remember all those who fell on that bloody field. 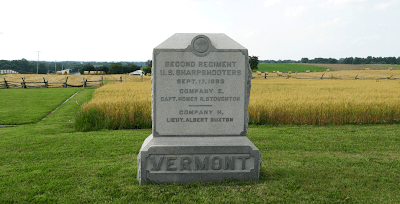