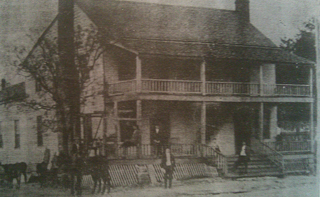 The Harrison Hotel, located in Raleigh, Mississippi, was once the favorite haunt of politicians, attorneys, soldiers and an endless assortment of ne’er-do-wells. The two-story hotel was probably built in the mid-1840s, although there is no known date of construction. Certainly, it was among the first public buildings in Raleigh, which was incorporated in 1838.  Besides the Smith County Courthouse, the hotel was for many years the most important building in town. The first owner of the hotel was John Wesley Weems, who served as President of the Smith County Board of Supervisors in 1864. After the Civil War, John M. Childre purchased the hotel, and in 1888 it was sold to Mrs. Elizabeth Walker Currie, who also owned a hotel in Taylorsville. Finally, in 1906, the Harrison family purchased the hotel. The name of the hotel apparently changed with each new owner. 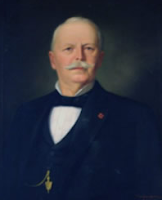 From many years, due to its proximity to the courthouse, the hotel served as a backdrop for politicians and political rallies. During the 1851 gubernatorial campaign, Jefferson Davis made a speech at the courthouse and visited and dined at the hotel (Davis lost the elected to Henry S. Foote by just 999 votes). Governor Robert Lowry (left) frequented the hotel during his administration (1882-1890) and both Governor Theodore Bilbo and Representative Ross Collins made the Harrison Hotel a regular stop. In addition, Governor Anselm McLaurin’s law office was next door to the hotel. Because it was located across from the courthouse, large crowds of men would often gather outside the hotel during court sessions or elections and, liberally encouraged by heavy drinking, fight with each other and race horses down the middle of the main avenue in Raleigh. On such occasions, the school would be closed to protect the children from the “festivities.” 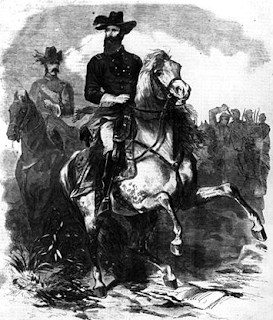 During the Civil War, two companies of the 8th Mississippi Infantry (A and C) trained near the hotel and used it as a place of entertainment on Saturday nights (at some point, there was a saloon conveniently located across the street). On the morning of April 26, 1863, Union cavalry under Colonel Benjamin Grierson passed by the hotel on their famous raid through Mississippi. It was a Sunday morning. Caught up in the rapid advance of the Federal troopers was the Smith County Sheriff and Tax Collector, J.D.W. Duckworth, who had in his possession all of the county’s state and local tax monies ($3,830). Whether the good sheriff was merely holding it for safekeeping or taking it for himself is unknown (but let’s assume the former). In December, the Mississippi Legislature saw fit to absolve Sheriff Duckworth of any liability for the missing funds, as he was "robbed by the public enemy," and authorized the Smith County Board of Police to discharge him from prison (apparently he had been under arrest for several months). In 1864, Colonel Robert Lowry was assigned by Leonidas Polk to round up Confederate deserters and disloyal persons who had been terrorizing the citizens of Smith and Jones counties. Using the 20th Mississippi Infantry and portions of the 6th Mississippi Infantry, Lowry was successful in forcing several hundred men back into the ranks, and driving other disloyal men from the area. During the operation, nine men were hanged, two shot, and one wounded, at the cost of two killed and one wounded in Lowry’s command. Lowry’s headquarters was located at the hotel, then owned by John Wesley Weems.

The Harrison family kept the hotel in operation until the 1940s.  When the Harrisons purchased the hotel in 1906, brother Ben Harrison and sisters Jennie and Hattie Harrison managed the hotel and a nearby store together. After Ben died of typhoid fever in 1914, the two sisters ran the hotel until Jennie’s death in 1931 of malaria, leaving Hattie to run things by herself. The surviving Harrison was known for her sharp tongue and quick wit. About 1915, for example, there was a trial at the courthouse involving a lawsuit by a man injured when a train collided with his wagon. During a lunch break in the trial, all court officers, jurors and spectators walked across the street to the Harrison Hotel for lunch. As the hotel had no running water, there was a wash basin on the hotel’s front porch. One gentleman, dressed in a fancy suit and wearing a large diamond ring, approached Miss Hattie (left) to see if she might have a clean, dry towel. Looking him over, she said “Mister, you must be one of the railroad men.” With an accent that was “foreign to Smith County,” he affirmed that he was a claims agent for the railroad company. Miss Hattie then said “You must be from Illinois.” Again affirming that he was, he added that he worked out of Chicago. “I knew you had to be,” she said, “There have been thirty-eight people, including the Judge, the Sheriff, the Circuit Clerk, the Court Reporter, and the jurors who have come through this line ahead of you and used the same towel, and you’re the only person who has complained!” After a lengthy illness, Hattie Harrison died in 1947. The next year, the old hotel was demolished. The loss of the local landmark was mourned by many in the region, including the editor of the Smith County Reformer, who wrote that the hotel “stood as a silent witness to many stirring events in the County’s history, some of which, unrecorded by the historian, live only in the folklore of those long gone but never to be forgotten days.”

Information for portions of this article is from the Smith County Reformer, July 23, 1997, and on information provided by Gene Tullos of Raleigh, Mississippi.