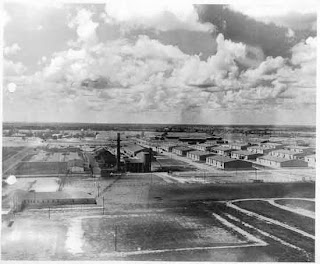 As Allied forces landed on the beaches of Normandy to begin the invasion of Nazi-held Europe on June 6, 1944, millions of Americans were working hard at home to ensure that army and navy personnel would have the equipment, arms and ammunition needed for the arduous task ahead. Just as the heroic deeds of the Allied troops should be remembered on this day (the anniversary of D-Day), so should the sacrifices of the domestic industry supporting the war effort. 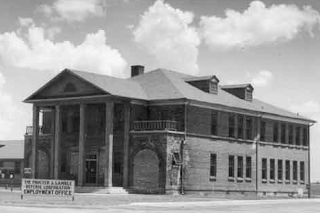 One of the largest ammunition plants in the United States during World War II was located at the little town of Prairie, Mississippi, which is near Aberdeen in Monroe County. The Gulf Ordnance Plant (above right) was a military munitions plant where shells used during World War II were loaded and packed. The plant, which was in operation from 1942 until the end of the war in 1945, produced 20, 40, 57, and 67 millimeter shells, rocket launchers, 100 pound bombs and Naval tracer ammunition. It has been estimated that the plant supplied nearly 25% of the munitions used during WWII by the United States armed forces.

In early 1941, Prairie was one of three sites being considered by the U.S. government for the location of a new munitions plant. Due to the effort and support of Mississippi Senators Wall Doxey and Theodore Bilbo, along with Congressman John Rankin, the plant was finally located in Monroe County. The news broke in the Aberdeen Examiner on March 19, 1942, with the headline “We Get Plant!” Before construction could begin, several sections of land was condemned and approximately sixty families were relocated and many of their homes and farm buildings moved. 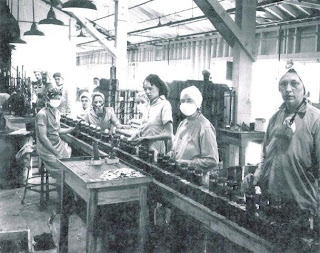 Managed by the Procter and Gamble company, which had already built a munitions plan in Milan, Tennessee, the plant site encompassed approximately 6,720 acres of land, and consisted of administration buildings, assembly and storage buildings, railroads, dormitories, guard houses, a cafeteria and a paved roadway system. The photo above is of the plant's employment office. The plant employed as many as 10,000 workers at its peak, most of whom were women, and many credit the Gulf Ordnance Plant for the recovery of the surrounding area from the economic hardships of the Depression. In nearby Aberdeen, business was so good that local cafes were open 24 hours a day and theaters were packed for every showing. A special bus line known as the “Mississippian” was available to transport workers to and from the plant in a 100-mile radius. During the plant’s existence, it was the second largest industry in Mississippi. In this photo (above left) are some of the plant's many women who worked on the assembly lines. To the left is Margaret English, a native of Aberdeen, who worked as a office assistant at the plant. Margaret currently resides in Raymond, and is my mother-in-law.

After the war ended, there was no longer any need to produce munitions in such quantity. As such, the plant closed, and most of the buildings associated with the Gulf Ordnance Plant were destroyed by the U.S. military, along with unused munitions. Today, very little remains to mark the location of the plant except for a few ruins. A portion of the site is used as a Mississippi State University experimental cattle ranch. The little town of Prairie is virtually a ghost town. Although there are few physical reminders of the plant’s existence, the men and women who worked there acquired valuable skills for the private sector. More importantly, they played an important role in winning the war over Germany and Japan in 1945.