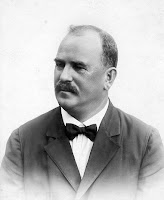 Born in 1863, Horatio Stephen Weston was the third child born to Henry and Lois Weston of Logtown, Mississippi, in Hancock County. Horatio's father, a native of Maine, founded the H. Weston Lumber Company in 1848. As the name of the community might indicate, the sawmill (below), said to be the largest in the United States, employed most of the people in the Logtown vicinity. After attending school, Horatio began working at his father's mill at age sixteen and became president of the company following his father's death in 1912. From then until 1931, he was a very busy man indeed. 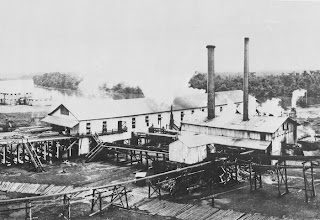 Among his many accomplishments, Horatio Weston served as the first president of the Mississippi State Development Board, president of the Hancock County Bank in Bay St. Louis, vice president of the First National Bank of Gulfport, a trustee for Gulf Park College, and a director of the Louisiana-Mexican Lumber Company, Union Lumber Company, Mississippi Power Company, and the Alabama Power Company.  He was a member of the Hancock County Board of Supervisors for thirty years, most of that time as president. During his time on the board, the Hancock County seawall and Beach Boulevard were built, and through his efforts the Bay St. Louis bridge was constructed in 1928. During World War I, he volunteered as chairman of the Red Cross in Hancock County, and was a member of the Food Conservation Committee. All this time, he managed to run a successful lumber business and help raise a family in Logtown. 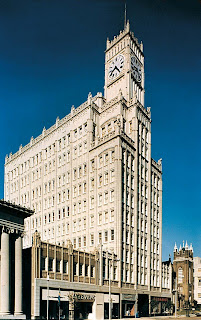 In 1906, the Lamar Mutual Life Insurance Company was formed in Jackson. Horatio Weston, sensing a good business opportunity, bought ten shares at $100 each, which represented 1% of the company. Named for Lucius Quintus Cincinnatus Lamar, the company began in a suite of rented offices in a building next to the Century Theatre. The first life insurance policy was sold to Mississippi governor James K. Vardaman. In 1907, Weston was elected as one of the company directors. From this point on, Weston moved out from the lumber business and into the insurance business. The reason was simple: the supply of trees was rapidly disappearing in south Mississippi, and Weston needed to invest in a more stable industry. He would not leave Logtown, however, preferring instead to remain in his comfortable home (see below) and travel to Jackson to attend to company matters whenever necessary.

Sharing an office with Weston when he came to Jackson was Christian Webb Welty, another of the company's directors (and father of Eudora Welty). It was the duo of Weston and Welty that made the Lamar Life Company successful in the early years. While Welty ran the company on a daily basis, Weston worked in the background as a financier and advisor. The team of Welty and Weston was also the driving force behind the completion of the Lamar Life Building, dedicated in 1925 (above). In this arrangement, Weston earned the nickname “Mr. Outside," while Welty was known as "Mr. Inside.” While serving as president of the company, however, Weston suffered a stroke in his office at the Lamar Life Building on September 19, 1929. Although it was not fatal, he would never again return to work. Out of respect, he was elected as the first board chairman in 1931, while Welty was named president with a salary of $15,000 per year. Soon thereafter, on September 8, 1931, Horatio S. Weston died of a hemorrhage and was buried at Lakewood Memorial Park. Just fifteen days later, on September 23, Christian Welty joined him in death, suddenly leaving an enormous leadership vacuum at Lamar Life.

The Weston Lumber Company closed in 1928, and the thriving community that was once Logtown withered away. All that remains is a very impressive cemetery which includes many members of the Weston family. In 1961, the site of the old town was part of a planned rocket engine testing facility for the National Aeronautics and Space Administration (NASA). Now known as the John C. Stennis Space Center, the project required relocation of the 700 or so folks who still lived in the mostly vanished communities in the area. All is not forgotten, however, as NASA plans to memorialize the people who lived and worked there. Among the hardest working was, without question, Horatio Weston.