At eighty-one years old, William Spillman had led a full life. Still, his death in 1886 from injuries sustained in a fall down a flight of stairs was an unsuitable end to such a varied career. Born in Blount County, Tennessee, on August 31, 1806, Spillman and his wife Nancy moved to Columbus, Mississippi, in 1838, where he worked as a druggist. At age 40, he entered medical school and graduated from the Philadelphia (Pa.) Medical School in 1846. Thereafter, he had a successful medical practice for more than twenty years before becoming an itinerant Methodist preacher. Entering the Alabama Conference in 1859, he served the next twenty five years in various appointments, including a stint as a missionary to seafarers in Mobile. As a minister, he was known more for his skill as a theologian than for his preaching ability. 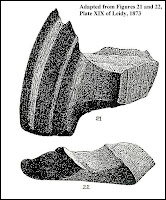 In addition to being a medical doctor and minister, Spillman was also a pioneering scientist, contributing to the fields of botany, conchology (the study of shells), geology, paleontology and speleology (the study of caves). One of the few Mississippians belonging to the Academy of Natural Sciences at the time, Spillman was honored with the naming of many fresh water shells and according to his obituary exhibited a “great whale-like monster” (the Zeuglodon Cetorides) at the World’s Industrial and Cotton Centennial Exposition in New Orleans in 1884. Spillman’s geological work and extensive fossil collection influenced early geological surveys of Mississippi and Alabama, and because specialists in geology and paleontology did not regularly come to Mississippi in the 19th century, almost all that was discovered about Mississippi Cretaceous fossils between 1854 and 1873 was due to Dr. Spillman’s efforts. He was apparently a friend and colleague of B.L.C. Wailes and at least acknowledged by geologist Eugene W. Hilgard as an gifted “amateur.” The image above is an example of some of the fossils collected by Dr. Spillman. These are from a class of fish known as Chimaeroids, which were closely related to sharks.

Whether considered an amateur or a professional, Dr. Spillman found a large number of fossil teeth at Barton's Bluff in Clay County, so many, in fact, that he called the place "Sharks Defeat."  Barton's Bluff is seen here (left) in a photograph taken about 1914. The teeth were from a variety of prehistoric creatures, including a “saber-toothed” fish, Plesiosaurs, Mosasaurs and several varieties of shark. Spillman also searched for fossils at a number of locations along the Tombigbee River near Columbus, not only contributing to his own collection but freely shared his discoveries with scientific institutions, including the Smithsonian. The image on the right is a small collection of some of the sharks' teeth gathered by Dr. Spillman. 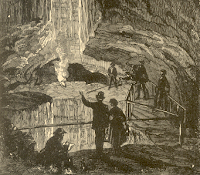 William Spillman also loved caves. As a amateur speleologist, Dr. Spillman explored a number of caves, mostly in Tennessee. His obituary recounted one such trip he made to a cave: “Dr. Spillman once led a picnic-party into a large, deep, dry chamber in a cave that he had discovered and first explored. They were let down by a windlass through a sort of natural shaft for perhaps sixty feet, the entrance of the chamber, then ninety feet more from its ceiling to its floor. This chamber was nearly one-hundred feet in circumference. The stalactites from its ceiling were nearly transparent, looking like icicles of glass. The floor was covered with bright stalagmites. In the center was an elevated, table-like rock, some three feet high, four feet broad and eight feet long. On this the snowy linen was spread and the repast laid. A box of candles was opened, and a hundred stalagmites served as candlesticks. The little party stood around the table, and Dr. Spillman said “Sing ‘Praise God from whom all blessings flow,’” and as the notes of 'Old Hundred' reverberated from wall to wall, and floor to ceiling, and down the corridors that entered into that blazing, buried crystal palace, his soul, he said, was never so stirred with song before…" 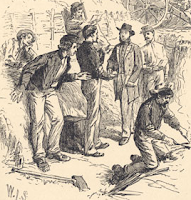 During the Civil War, Spillman volunteered his services to the Confederate cause and served as a distributor of religious tracts* in military hospitals. He also worked as a chaplain and medical doctor at several hospitals along the Mobile & Ohio Railroad, especially at Lauderdale Springs. Today, the site of Lauderdale Springs includes a large Confederate cemetery.  In 1870, while serving at the Methodist church in Enterprise, he transferred to the Mississippi Conference of the Methodist Episcopal Church, South. Three years later, he retired but continued to serve a church on the Stonewall Mission in Clarke County. In 1882, at age 76, he was editor of the Mississippi Methodist newspaper, then published in Meridian.

Following his fall down the stairs, Spillman died at Mathersville, Mississippi, on December 11, 1886. In his obituary published in the Mississippi Conference Journal, the writer stated that “He had a strong, unvarying faith in God; he saw nothing amid the rocks that tended to controvert the teachings of God’s Holy Word. He had that purity of heart that enabled him to see God everywhere; he traced his handwriting on the pebbly shore or shining strand; he saw the touch of his finger amid granite bowlders, as well as on the beauteous flowers that decked the rugged mountainsides.” Dr. Spillman is buried in Friendship Cemetery in Columbus beside his wife, who preceded him in death. Although his grave stone is missing, his house ("Beckram," below) still stands and his legacy lives on in the publications of the Smithsonian Institution, the U.S. Geological Survey, the Academy of Natural Science of Philadelphia and the Geological Surveys of Mississippi and Alabama. Truly, if any such person ever lived, Dr. William Spillman is the model of a “renaissance man.” 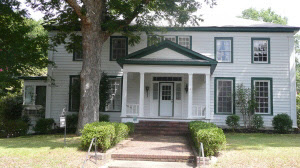