In 1890, Dr. A.L. Bondurant, a Latin professor and later dean of The University of Mississippi Graduate School, rallied "Ole Miss" students to help form an athletic department to encompass the sports of football, baseball and tennis. The students brought this initiative to reality and, in 1893, with Bondurant as the coach, the Mississippi football team came into fruition. 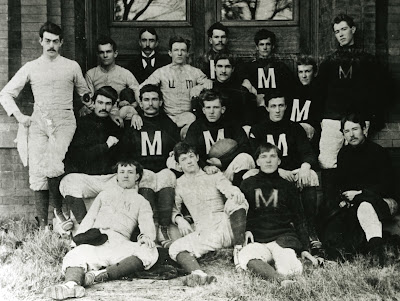 The player wearing the white shirt (left side, middle) is the author's* great-grandfather,  Hubert D. Stephens of New Albany.  He lettered in 1894 and 1895 and was a member of the Phi Kappa Psi fraternity.  He graduated from the University of Mississippi School of Law in 1896 and went on to become a five-term Congressman and a two-term U.S. Senator.  A photo of Stephens while in Congress is below.

The first Ole Miss football game ever played was on November 11, 1893. In that game, Ole Miss beat Southwest Baptist University of Jackson, Tennessee, by a final score of 56-0. The first team won four of five games during their inaugural season. The next year (1894), Bondurant passed on his coaching duties. The Ole Miss media guide lists C.D. Clark as the coach of the 1894 team and states that 'Although it has never been documented, it is thought that C.D. Clark of Tufts was the first paid football coach at Ole Miss.' This second season marked the beginning of two of Ole Miss' two biggest rivalries - Alabama and LSU. The rivalry with Mississippi A&M (later known as Mississippi State University) came a little bit later. The University defeated both Alabama (6-0) and LSU (26-6) during the 1894 season.

Initially known as the 'Red and Blue,' the football team was called the 'Mississippi Flood' for a few years, at least by sports writers. After joining the Southeastern Conference (SEC), however, the nickname was changed to the 'Rebels.' The cardinal red and navy blue colors were chosen to reflect the esteem of Harvard and Yale, two of the nation's early football powerhouses. In its 118-year history, the Ole Miss football program has claimed three national championships (1959, 1960 and 1962), six Southeastern Conference titles (1947, 1954, 1955, 1960, 1962, and 1963), and one SEC Western Division title (2003), produced 54 first-team All-Americans and 166 first-team All-SEC selections, appeared in 33 bowl games with 21 wins, and sent more than 270 players into the professional ranks.

* The author of this post is John Cofield of Memphis, Tennessee.