In 1956, Harold Rance Beckenholdt, an actor from Oklahoma, landed a part in his first film. Entitled Frontier Woman: Daughter of Davy Crockett, the film was shot on location at Dunn's Falls (below, left) and at various locations along the Chunky River in Mississippi. Frontier Woman was produced by Lloyd Royal, an entrepreneur from Meridian who owned and operated several theaters in the region (all named Royal) and an amusement park (named Royal Land) in Meridian (more on all that in a future post). In the 1950s, Royal produced a handful of B-grade movies, and then premiered them in his theaters. Royal's  films mostly played in the drive-in theater circuit. In at least one drive-in advertisement, the movie was billed as "Made in Mississippi with an All-Southern cast!" (see below) 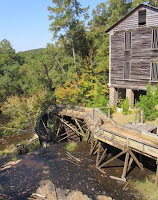 The story of Frontier Woman is a bit confused, but involves Polly, the daughter of Davy Crockett, who was raised by an Indian woman in Tennessee, who has a son named Neshoba. Neshoba has romantic feelings toward Polly. Polly, however, considers him like a brother (quite logical, actually). Meanwhile, Rosebud, an Indian girl, is secretly in love with Neshoba. Enter an unscrupulous trader (Beckenholdt) named Prewitt and another named Catawampus Jones. Prewitt, knowing the jealousy of Rosebud toward Polly, uses it to divide the Indians and the white settlers in order to take the land for himself. In addition to lots of Indian war parties attacking settlements, Polly and Rosebud fight after both Neshoba and his mother are killed. Polly wins, but spares Rosebud's life, earning the gratitude of Rosebud. Polly then saves the honorable trader Catawampus Jones by shooting Prewitt with an arrow, and Polly and Catawampus ride off together to live happily ever after. Confused yet? 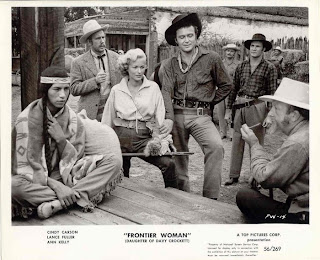 Needless to say, Frontier Woman did not earn any awards and was never even nominated for an Oscar. In fact, the film is unavailable today, although it seems that Turner Classic Movies may own a print of it. Aside from the locations for the film, it is best remembered because of Harold Beckenholdt, who changed his name to Rance Howard. Rance and his wife Jean both appeared in Frontier Woman, and included their 8-month old son Ron in one of the scenes. Since Frontier Woman, of course, Ron Howard (yes, that Ron Howard), perhaps best known as Opie Taylor and Richie Cunningham, has gone on to act in over 100 films and directed dozens of others. 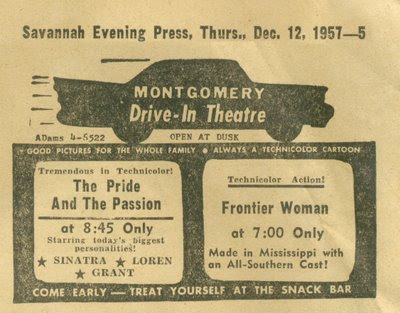