The Star of the West 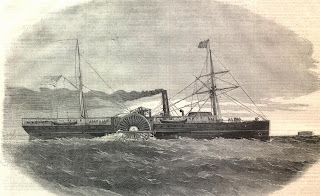 As yesterday (April 12) was the 151st anniversary of the firing on Fort Sumter in Charleston, South Carolina, which is considered the opening salvo of the Civil War, today’s entry is about an actor in the Fort Sumter drama and "her" connection to events later on in Mississippi. "She" is a ship - the Star of the West.

On January 9, 1861, several weeks after South Carolina had withdrawn from the Union (and the same day that Mississippi seceded), the Star of the West was used to try and resupply Major Robert Anderson’s Federal garrison at Fort Sumter, located in the middle of Charleston Harbor. As she entered Charleston Harbor, cadets from The Citadel manning an artillery battery at Morris Island fired on the Star of the West. She was hit three times and forced to turn about and leave the harbor, unable to resupply Fort Sumter. Failing at their mission, the crew of the Star of the West turned her back to New York, and the South Carolinians had their first victory. The mural painting (below) depicts the firing on the Star of the West, and is located in the Daniel Library at The Citadel.

Following the incident in Charleston, the Star of the West was used as a troop transport and sailed to Texas to pick up seven companies of Union troops. On April 18, 1861, while anchored in Matagorda Bay, the ship was captured by Colonel Earl Van Dorn, a native of Port Gibson, Mississippi, and two Texas militia units. Two days later, the captured vessel was taken to New Orleans, where her name was changed to the CSS St. Philip. Remaining in New Orleans, the Star of the West (the name most everyone continued to use) served as a hospital ship until New Orleans was captured by Union forces. The Star of the West herself avoided capture by heading up the Mississippi to Vicksburg and then to Yazoo City, where there was a Confederate ship yard.

A year or so later, in the spring of 1863, U.S. Grant’s Army of the Tennessee was mired in the swamps of Louisiana looking for a way to cross the Mississippi and attack Vicksburg. Until they could do that, Grant looked for other ways to get to Vicksburg, including sending various amphibious expeditions into the twisting waterways of the Mississippi Delta. One of these expeditions involved a naval group commanded by Lieutenant Commander Watson Smith, who squeezed gunboats and transports through the Yazoo Pass and into the Tallahatchie River.

To counter the threat, Confederate defenders hurriedly built Fort Pemberton at Greenwood, an earthen fort supplemented with cotton bales. Fort Pemberton was ideally situated to provide an unobstructed field of fire at any gunboats heading downriver. To further strengthen the position, the Confederates built several smaller forts in the vicinity to cover other approaches, and blocked the river channel to prevent the Union Navy from moving further downstream. To achieve this, Confederate Major General William W. Loring (left) ordered the Star of the West to move up from Yazoo City, where she was scuttled and sunk across the Tallahatchie river channel. In the resulting fight at Fort Pemberton, exactly two years after Fort Sumter (April 12, 1863), the Union forces were bested by the guns at Fort Pemberton and forced to withdraw up the Tallahatchie and back to the Mississippi. The Star of the West, once a steamship on the high seas, ended her career and played her final role at the bottom of the Tallahatchie River in service to the Confederacy, where she remains today. At times of very low water, some of her timbers can occasionally still be seen. Portions of the earthworks at Fort Pemberton (above, right) are open to the public at a small park west of Greenwood on Hwy. 82.

As a postscript, The Citadel in Charleston has an annual competition for precision in military maneuvers. Begun in 1886 to recognize the best-drilled cadet, the names of all of the winners of the Star of the West Medal are engraved on the Star of the West monument on the drill field. The monument is dedicated to the memory of the Cadets who fired on the ship in 1861, and was erected in 1961, the centennial year of the conflict. Perhaps ironically, one of the recent winners of the medal (both in 2007 and in 2009) was Cadet Marqus Javon Ross (right), who is African American.