The Day It Snowed in New Orleans 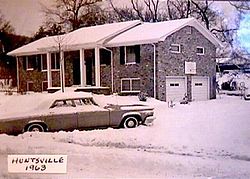 Spring is here in full force and summer, no doubt, will be here shortly. Winter, it seems, hardly made a showing this year in central Mississippi. Unless I'm mistaken, we had no measurable snowfall this time around. Even the traditional "Easter cold snap" failed to show up (although it's a little bit chilly this morning). So what happened? Is it global warming? The Mayan calendar perhaps? Who knows. Based on snowfall statistics, though, the answer might be that this year is the norm and snowfall, particularly heavy snow, is simply a rare event in the deep south. I remember a good snow in 1968 or so, and then another one in 1981-82. That was fun because we were "trapped" on the Millsaps College campus for a week and enjoyed such things as sledding down North State Street on cafeteria trays. The snow that year that blanketed central Mississippi was significant, but it was nothing like what happened on New Year's Eve back in 1963. 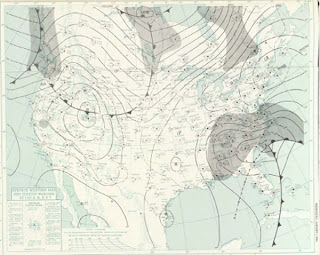 That year, a surface low-pressure system moved up from the Gulf of Mexico and into Mississippi, Alabama and Tennessee. With heavy snowfall and high winds, the winter storm completely paralyzed the deep south for several days, and at least three people died during the storm. In southeast Louisiana, and in New Orleans particularly, more than four inches of snow fell. In parts of eastern Mississippi, in northwest Alabama, and into Tennessee, more than a foot of snow fell in the span of one day. Meridian, Mississippi, recorded fifteen inches. Even Bay St. Louis saw more than 10" of snow! In Alabama, Huntsville recorded 17.1 inches, making it the worst snow storm in the area since 1899. Roads were impassable for days. 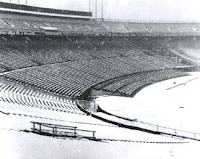 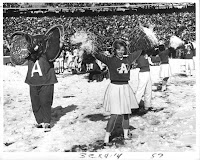 As its was New Year's Day, most folks in New Orleans were probably elated to find snow on the ground, a rare event indeed. One person not at all happy was Coach Bear Bryant, whose eighth-ranked Alabama Crimson Tide was set to play Coach John Vaught's sixth-ranked Ole Miss team in the 1964 Sugar Bowl. Earlier, Coach Bryant had said that the only thing that could mess with the Tide's chances against the Rebels would be if it snowed. Incredibly, there were four inches of snow waiting on Bryant at Tulane Stadium (top right) on the day of the game. Alabama had suspended Joe Namath, too, so things looked pretty good for Ole Miss, who was undefeated in 1963 (with two ties). Still, the Crimson Tide managed to win, edging Ole Miss 12-7 on the strength of four field goals. Ole Miss scored the only touchdown of the game. Playing in place of Namath at quarterback was Steve Sloan, later to become head coach at Ole Miss.