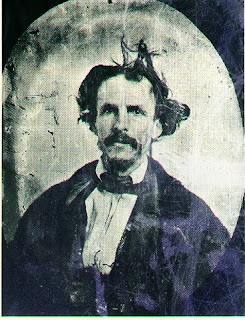 During the last years of the 19th century and in the early years of the 20th century, a gentleman unappreciated in his time and completely forgotten today labored in vain to bring his creative genius to fruition. An Irish-German-Italian immigrant, Giuseppe Reinhardt von O'Hanrahan (better known as "Crazy Bob") first settled in Jamaica. A particularly adverse reaction to a seafood dinner at a public house, however, forced him to emigrate to Mississippi in 1856. At once, O'Hanrahan decided to enter the prosperous cotton trade, although his efforts to convert the crop into an edible product were largely unsuccessful. At the onset of the Civil War, O'Hanrahan tried to enlist in the Confederate army with the 53rd Mississippi Dismounted Infantry. For reasons unknown today, he was turned down. However, he next offered his services to Col. Hezekiah Jedediah "Bubba" Smith, commander of a battalion of foot artillery. O'Hanrahan, who considered himself somewhat of an inventor, approached Smith about making improvements to the type of artillery shell used by Smith's unit. Unfortunately, despite months of effort, his experiments using square artillery projectiles had a rather disastrous effect and he was transferred to a Confederate prison for the remainder of the war for his own safekeeping. 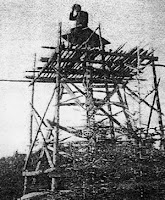 Following the Civil War, O'Hanrahan spent several years on the railroad and at other odd jobs. However, this ultimately proved undesirable because the work required too much effort. To satisfy his desire to live a life of comfort and ease, therefore, O'Hanrahan decided to enter the field of architecture. Immediately, he used his creative talents to develop a more efficient chicken house. Remembering the castle towers of his native Ireland, O'Hanrahan theorized that chicken houses could be more productive as vertical structures. Accordingly, he developed a prototype 'Hen Tower' and constructed a test model (the photo to the right shows O'Hanrahan on the wooden 'Hen Tower' just as construction is under way). Alas, the design was a failure, as the eggs produced by the chickens fell too many levels and created quite a mess (apparently, O'Hanrahan's design did not allow for flooring at any level). With this setback, he developed plans for a second type of chicken house which would allow the eggs to roll out of a shute and into a waiting egg wagon. When built, however, it was evident that the angle of the egg shute was completely wrong and once again the broken eggs created too much of a mess. All that survives of this structure is an artist's rendering (below, left) of the building that O'Hanrahan called "Falling Ova." Today, the site where it was located is a 24-hour omelet house. 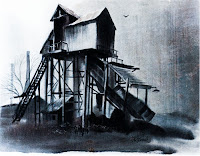 Broken by successive failures in business, as an architect, and as a soldier, and with no apparent skills to speak of, Giuseppe Reinhardt von O'Hanrahan finally found his calling as a government employee. Specializing in bureaucratic linguistics, O'Hanrahan's greatest triumph is that he is the first person to successfully use both "capture" and "universe" in the same sentence. In 1928, O'Hanrahan, long since past the usual age of retirement, fell into a deep sleep during a meeting and never recovered. He is buried in an unknown grave in Section 106 in the Jackson cemetery.