The National Museum of Funeral History

Today's subject is not in Mississippi, nor have I ever visited this place. Trust me, though, it's on my short list. You could even say that I'm just "dying" to go there. I'm talking, of course, about the National Museum of Funeral History in Houston, Texas. According to one newspaper's review, visitors to the museum will find a place "where soft music and hushed words waft from the sound system, the sweet scent of flowers leaves a faint trail in the air and exhibits extol everything from the birth of embalming to the mourning rituals of the Victorian Era." Another reviewer, noting that no one else was there at the time, said it was as "quiet as a tomb."

Located in a rather nondescript building surrounded by residential neighborhoods, the National Museum of Funeral History was founded in 1992. Privately owned, the museum has plenty of space (of course - it's Texas!) with over 35,000 square feet of exhibit space. Among the numerous exhibits are a model Victorian funeral parlor, a large collection of caskets and coffins, an exhibit on the history of embalming, and hearses of all shapes and sizes, including one designed specifically for children (below, right). In 2008, the museum, in cooperation with the Vatican, added a 10,500 square foot exhibit called "Celebrating the Lives and Deaths of the Popes'" and includes the Popemobile used by Pope John Paul II in 1982. 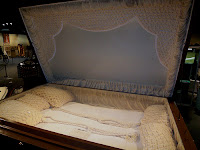 Among the more unusual items is a casket built for three (left). Apparently, it was made for a Colorado couple in the 1930s whose baby died. Grief-stricken, they had planned to commit suicide and be buried together in a single coffin. When they decided not to go through with it, the coffin went unused. Then there's the 1972 Toyota Crown station wagon on steroids that served as a Japanese hearse; a funeral sleigh (probably not much use in Texas), and a 1916 Packard funeral bus for a coffin, pallbearers and twenty mourners (see below). The funeral bus was used in the San Francisco area in the 1920s. With the driver up front and the deceased behind him, the pall bearers and mourners sat in the back of the bus. One day, so the story goes, the bus was climbing a steep hill in San Francisco and turned over, sending all the passengers, including the deceased, on a roll down the hill. That was the end of the funeral bus.

Naturally, the museum has a gift shop, where one can purchase a coffee mug or a  huggie with the museum's motto ("Any day above ground is a good one") on it, or perhaps a DVD on the "The History of Embalming." Other items include a coffin golf putter, a necklace with coffin charms or chocolate casket candy bars. If you'd like to do a little vacation planning, the museum is hosting its annual golf tournament, casino night and cocktail party in May.

And while you're in Houston, don't miss the giant armadillo at "Goode's Armadillo Palace," which features a 14' long, 22' tall, steel-plated armadillo with longhorns and glowing red eyes! Come to think of it, after seeing something like that, you might just need the services of a funeral director...