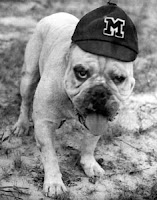 As some of you may know, I have an interest in the history of college mascots and have made numerous presentations on the subject in recent years, focusing on Mississippi-related and SEC mascots. Today's subject, the saga of the first “Bully” at Mississippi State, is one of several mascot-related stories that bear repeating.

The first teams at what was at the time Mississippi A&M College were called the ‘Aggies,’ obviously due to the school’s association with agricultural training. By 1932, however, the nickname Maroons came into vogue, referencing the school colors. Then, in 1961, Mississippi State University finally selected ‘Bulldogs’ as the official mascot. The university’s association with bulldogs, however, goes all the way back to November 30, 1905. On that day, the A&M football team defeated their rivals from the University of Mississippi 11-0 in Jackson. To celebrate, the students paraded down Capitol Street with a faux funeral for the “dead athletic spirit” at Ole Miss. According to The Reflector “A coffin was secured, decorated with University colors and a bulldog pup placed on top. It was then placed on the shoulders of a dozen cadets, and the procession started down Capitol Street, preceded by the brass band playing a very pathetic funeral march.” What prompted someone to hoist a bulldog on top is a mystery, but from that time on bulldogs have been a part of Mississippi State athletics. 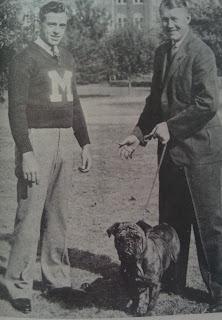 It wasn’t until the mid-1930s, however, that an actual bulldog was used as a mascot. In 1935, Major Ralph Sasse, the new coach of the Maroons, decided to obtain a bulldog to inspire his team. A native of Delaware, Sasse was a West Point graduate and a World War I hero, commanding a tank battalion (one of his admirers was George S. Patton). After the war, he returned to West Point as a mathematics professor and was named head football coach in 1929. Sasse (seen here, on the right) next came to Starkville to teach science and coach football, and his time was at Mississippi State was very successful, compiling an impressive record and making it to the Orange Bowl in 1936. Sadly, his tenure at Mississippi State ended in 1937 when he suffered a nervous breakdown and had to leave coaching altogether. Even in the short time he was in Starkville, however, Sasse earned a place among the greatest coaches in Bulldog history.

The bulldog that Coach Sasse “acquired” (he was actually rented) was named ‘Ptolemy,’ named for the Greek mathematician and astronomer Claudius Ptolemy. Ptolemy (or ‘Tol,’ as he was known) came from Memphis and belonged to the Edgar Webster family. In the photo above, Coach Sasse (right) is seen holding Tol. The same year that Tol arrived (1935), the Maroons defeated both Army (which was the powerhouse of the day) and Alabama. Clearly, the addition of the mascot had been a good move, but Joe Rice Dockery, a graduate of A&M and proprietor of Dockery Farms near Cleveland, was a bit embarrassed that his alma mater had to rent a mascot. So, Dockery purchased another bulldog for $150 and presented him to the school. Named ‘Bully’ (now known as “Bully I”), he would spend the school year on campus and then go to Dockery for the summer. 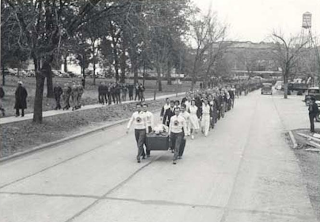 Alas, Bully I (his photo is at the top of the page) would meet a tragic end. In November 1939, Bully, who was allowed to freely roam the campus, was hit by a bus and killed. For several days after his death, students mourned the loss of their beloved mascot and passed by his glass-covered coffin to pay their respects. On the day of the funeral, which was covered by LIFE magazine, a half-mile long funeral procession along present-day Lee Boulevard wound its way to Scott Field, where, escorted by the band and three battalions of ROTC cadets, Bully was buried under the bench at the 50-yard line, where he presumably rests today. 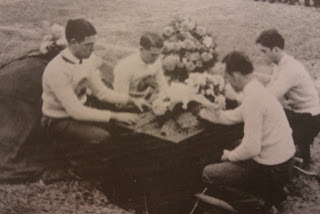 Over the years, other bulldogs have come and gone at Mississippi State (all since named Bully), and all have been treated with great respect, reverence and good bit of pampering. Occasionally, the “northern” rivals have kidnapped Bully and, on one occasion, precipitated his demise by painting him with red and blue paint. But that’s another story for another day. As a follow-up to this story, I recently met a gentleman whose grandfather owned the bus company that ran over Bully. Feeling the need for his company to be represented at the funeral, but also fearing what the reception might be from the mourning students, his grandfather decided to send his son (the gentleman's father) to the funeral, thinking perhaps the Bulldog faithful would be less inclined to kill a young teenager paying his respects. Apparently, he survived.