From the 1930s to the 1950s, the "Gold Coast,” located on the east bank of the Pearl River across the Woodrow Wilson bridge from Jackson, was known primarily for bootleg alcohol, gambling and other sundry vices (and not infrequent murders). Also called "East Jackson," the area sprang to life because of prohibition. Although prohibition ended nationally in 1933, it remained in place in Mississippi for another 30+ years. It was during this period that the Gold Coast flourished, mainly fueled by Jacksonians streaming across the Pearl River to enjoy all the vices they would never allow in their own city. So lucrative was the illegal liquor business that the state had a tax on bootlegging! 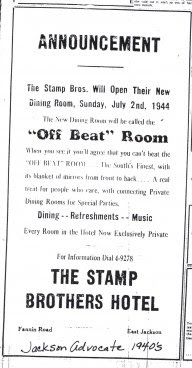 Besides the flowing alcohol, gambling and other unsavory activities, the Gold Coast was also home to numerous black musicians and entertainers, both national touring acts and local artists, who played in dozens of nightclubs, dance halls and juke joints located primarily on Fannin Road. Some of the acts featured are still considered among America’s greatest entertainers, including Duke Ellington, Cab Calloway (above), B.B. King, Ella Fitzgerald, Count Basie, Louis Armstrong, Dizzy Gillespie, Billy Holiday and Lena Horne. Among the approximately 130 nightclubs, restaurants and dance halls was the Stamps Brothers Hotel, believed to be among the first black owned and operated hotels in Mississippi. Built circa 1937, the Stamps Brothers Hotel, run by Charlie, Clift and Bill Stamps, boasted a 500-seat auditorium, the largest entertainment venue in the area. Known as the Rankin Auditorium, it could also accommodate 3,000 people on the dance floor. Notably, even in officially segregated Mississippi, the patrons were both black and white. The Stamps Hotel itself was one of the few hotels in the South available to black patrons. Other popular nightclubs included “The Blue Flame” and “The Rocket Lounge."

In 1966, Mississippi became the last state in the nation to end prohibition, giving individual counties the option to allow alcohol or not. Rankin County decided to remain (officially, at least) a "dry" county, while Jackson and Hinds County chose to allow the sale of alcohol. With the legalization of alcohol in Jackson, the Gold Coast began a rapid decline. The last nightclub, “The Blue Flame,” was demolished in 1991. To preserve the history of the area, however, a group of interested citizens formed the Gold Coast Historical Society, and the area has been included as part of the Mississippi Blues Trail.