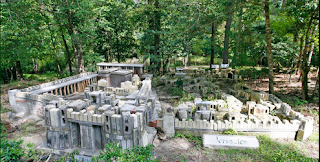 Fifteen miles from Lucedale, Mississippi, there is a unique attraction built not for entertainment per se, but for educational purposes, specifically Biblical geography. The Palestine Gardens,* opened in 1960, is a one yard equals one mile scale model of the Holy Land constructed from cinder blocks and concrete. The attraction was the brainchild of the Reverend Walter Harvell Jackson, a native of Jefferson Davis County (below) and his wife Pellerree. In 1930, Jackson was in seminary at Columbia Theological Seminary in Atlanta. During a class taught by Dr. W.T. Ellis, the lecturer challenged his students to "study the Bible as a 'place book.'" With that seed planted, Jackson began thinking about how to make the land of the Bible come alive. 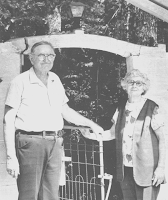 Ordained as Presbyterian minister in 1933, Rev. Jackson served churches in Kentucky, North Carolina, Alabama and Mississippi. In each place, he looked for a place suitable to create a Biblical landscape. He found it when he came to Lucedale as the pastor of First Presbyterian Church in the mid-1950s and used his life's savings to purchase the forty acres of land that would become a miniature Holy Land.

With very limited resources, and few tools other than a shovel and wheelbarrow, Reverend Jackson and his wife began constructing the gardens. First, they created the Dead Sea. Then, using concrete and cinder blocks, they created the cities of Jerusalem, Bethlehem, Cana, Jericho, and others. In all, it took seven years to complete, but on Easter Sunday in 1960 they held a sunrise service and then welcomed visitors. During the first year, 3,200 people toured the Gardens. While many visitors were curious locals at first, the literature for the site asserts that in the years since visitors have come from every continent except Antarctica.

In 1971, Jim Kirkpatrick retired from the Air Force and moved to Lucedale with his wife Jackie (the Jackson's daughter) to help with the site. With his help, the attraction expanded to include the Mediterranean Sea, the Sea of Galilee, and more Biblical cities. In fact, Mrs. Jackson, a teacher in the Lucedale Public Schools, worked an extra year in order to have the resources to build the Mediterranean. The entire area is landscaped with dwarf evergreens, azaleas, lilies, camellias, and mountain laurel, etc. At one time, Rev. Jackson, an experienced gardener, even tried to plant olive trees. However, they apparently could not survive in the climate. 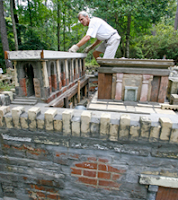 Rev. Jackson died in June, 1992, and his wife passed away the next year (also in June). Together, they had labored for almost forty years to bring their vision to fruition. The Kirkpatricks, who had also worked on the site for twenty-three years, tried briefly to take on the task of keeping up the Gardens, which requires a tremendous amount of physical labor. Due to health concerns, they decided to pass management of the site on to someone else. In 1994, Don (above) and Cindy Bradley answered the call and continue today as curators. They have continued to expand the Gardens and provide costumed guided tours on a regular basis. The Palestine Gardens now encompasses more than 20 acres. Throughout its history, admission has been free, and remains so today.

After visiting Palestine Gardens, tourists may wish to go into downtown Lucedale, where a 4x4 post with serated sides is located in front of a Chinese restaurant on Main Street. The post is known as "The Presidential Scratching Post" because Ronald Reagan is said to have scratched his back on it (after all, the sign does say "Scratch Your Back")!

*  Originally known as the 'Palestinian Gardens,' the current curators changed the name in 1994 to "prevent any misconception that we may be of the Islam religion."