"Dr. Tichenor's" is a product that's been around a while. If you haven't used it yourself, it's likely you've at least heard of it. Today, it's advertised as a mouthwash, but for many years was credited with many more uses. The subject of this entry is not about the product itself, however, but the famous Dr. Tichenor.

Much of what is "known" about George Humphrey Tichenor (1837-1923) may or may not be true. A native of Ohio County, Kentucky, Tichenor's father was a merchant and a steamboat owner. When his mother died in 1851, his father remarried and brought five additional children into the "blended" family. This arrangement apparently did not suit George or his brother, as both ran away from home. We next find Tichenor in Franklin, Tennessee, where he enlisted in the Confederate Army in 1861. It's at this point that the story gets a bit fuzzy. 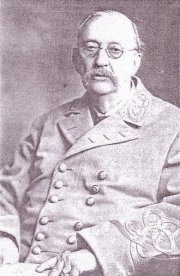 First, here is the popular story about George Tichenor's exploits during the Civil War. Enlisting in a cavalry regiment, Tichenor served as an assistant surgeon, and experimented with antiseptics on wounds. Badly wounded in the leg in 1863, an amputation was recommended, but he insisted on treating his wound with an alcohol-based solution of his own. Amazingly, his wound healed, and he regained the use of his leg. With this discovery, the good doctor saved the lives (and arms and legs) of thousands of wounded soldiers. However, Tichenor insisted that his techniques only be used on wounded Confederate soldiers, not on Union prisoners. After the war, Dr. Tichenor (left), using the knowledge gained as a Confederate surgeon, marketed his antiseptic formula and successfully sold it in New Orleans.

Unfortunately, the truth about Tichenor doesn't quite match the legend.* Before the Civil War, George Tichenor was engaged in business in Franklin, Tennessee, and advertised himself in Nashville as "Prof. G.H. Tichenor, Operator in Oriental and Positive Pictures." Although he apparently had an interest in chemistry, his practice was as a photographer, not in medicine. He did indeed enlist in the cavalry, and served in the Second (Tennessee) Regiment (Barteau's) Cavalry, also known as the 22nd Tennessee Cavalry, where he was present during several engagements in Mississippi, including the Battle of Iuka. On October 9, 1862, he suffered a self-inflicted, accidental wound in his left arm and went to Palo Alto, Mississippi, to recover. Although his arm wasn't amputated, there is no evidence that he  used an antiseptic on his wound (although he might have), nor is there any evidence that he was ever wounded in the leg or served as a surgeon or in any medical capacity in the army whatsoever. In fact, his enlistment papers states his occupation as "artist" rather than "doctor." 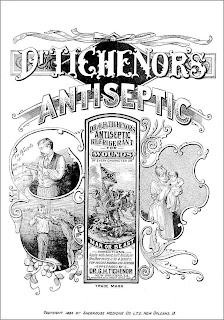 After recovering for several months in Palo Alto, Tichenor was ordered to Tennessee to act as a recruiting officer, and given the rank of Captain. Whether he ever made it to Tennessee or how much recruiting he did is unclear, but he was discharged from the army in June 1863 because of his wound. Thereafter, he seems to have settled in Canton, Mississippi, where he married Margaret Ann Drane, whose parents had moved there from Memphis to escape the Union occupation of that city. In Canton, where they lived until 1868, he once again engaged in the photography business and even opened a studio there. He also may have practiced some form of medicine while in Canton, as he patented an inhaler device in 1869. 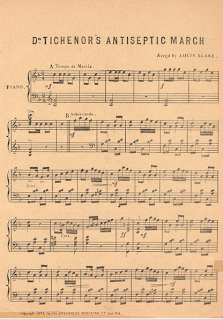 After leaving Canton, Tichenor and his family moved to Baton Rouge, perhaps by way of Liberty, Mississppi, where legend says he first developed "Dr. Tichenor's" (that "fact" is included on a state historical marker in Liberty). The couple did have a son in Mississippi in 1876, so they presumably lived in Mississippi at the time. Regardless, the family eventually moved to Baton Rouge and then to New Orleans, where he began bottling "Dr. Tichenor's Patent Medicine," which was patented in 1882. The elixir consisted mostly of alcohol, with a bit of oil of peppermint (for flavor) and arnica (used widely in linaments) thrown in. The product was marketed for a wide variety of uses for "man or beast," both external and internal, including as a remedy for mosquito bites or aching feet. The fact that the "medicine" was mostly alcohol probably accounts for its popularity through the years. It was so popular, in fact, that a march was written for it, called, appropriately, "Dr. Tichenor's Antiseptic March." Arrranged by Louis Blake, the piece (above, right) was copyrighted by the Sherbouse Medicine Co., of New Orleans in 1895, which was the distributor of "Dr. Tichenor's" at the time. The present-day company was incorporated in 1905 and is still in New Orleans.

Whatever the truth about "Dr." Tichenor's military service in the Confederate Army, he was very active in post-war veterans' organizations, and was the Division Commander of the United Confederate Veterans in Louisiana in 1916-1918 with the rank of Major General (the U.C.V. regularly gave military-style ranks to their officers). This medal (left) was used during the 1912 UCV reunion, held in Baton Rouge, no doubt attended by Dr. Tichenor. A clear indication of his devotion to the Confederate cause is the original illustration on bottles of "Dr. Tichenor's," which featured a scene of a soldier carrying a Confederate flag into battle. Needless to say, today's version of the product no longer bears this image.

Dr. Tichenor lived until the ripe old age of 85, perhaps due to liberal use of his own elixir. He died in 1923, and is buried in Baton Rouge. Interestingly, his gravestone identifies him as a doctor.


* Detailing many of the facts of Dr. Tichenor’s life is a excellent article written by Dr. Michael Trotter of Greenville, Mississippi, in a recent issue of the Journal of the Mississippi State Medical Association.